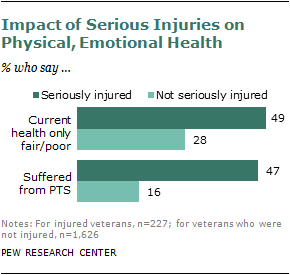 The physical, emotional and economic toll of a serious service-related injury does not end when the service member leaves the military. Years and even decades after they were discharged, veterans who were badly hurt while serving are significantly more likely to be in poor health and somewhat less likely to be employed.

According to the Pew Research Center survey, about half of all veterans who suffered a serious service-related injury say their health status is “only fair” or “poor”—nearly double the proportion of non-injured veterans who offer a similarly downbeat assessment of their physical well-being (49% vs. 28%).

The relationship between a service-related injury and current health status remains strong even when the age of a veteran is taken into account. Among veterans ages 60 or older, nearly half (45%) of those who were seriously injured while serving say their current health is fair or poor, compared with 27% of other veterans of a comparable age.

The impact of a major service-related injury may be even greater among veterans younger than 60, a group that includes most of those who have served since 9/11: More than half of this group who were injured rate their current health as only fair or poor (54%), compared with 30% of those who were not seriously hurt while serving.

Not all of the wounds suffered by members of the armed forces are physical. Seriously wounded veterans are about three times as likely as others who served to say they suffered from post-traumatic stress (47% vs. 16%). Similarly, four-in-ten injured veterans (40%) say they have had flashbacks, distressing memories or recurring nightmares about an emotionally traumatic experience they had in the military. In comparison, only 15% of those who were not injured while serving are similarly troubled.

While comparative data are difficult to obtain, a 2008 study by the RAND Corp. found that 13.8% of those who had served in Iraq or Afghanistan in the post-9/11 period suffered from PTS. That compares with 10.1% among those who served in the 1990-91 Gulf War and, depending on the study, about four times the estimated current rate of PTS in the population as a whole. A Department of Veterans Affairs study conducted in the late 1980s estimated the lifetime incidence of PTS among Vietnam-era veterans at 31% for men and 27% for women.

Among all veterans, those who were seriously injured while serving are less likely than other veterans to be employed full time and more likely not to have a job.

Overall, less than three-in-ten veterans (28%) who had been seriously injured are currently employed full time, compared with 40% of those who were not badly hurt while serving.

Attitudes toward their Service and their Country 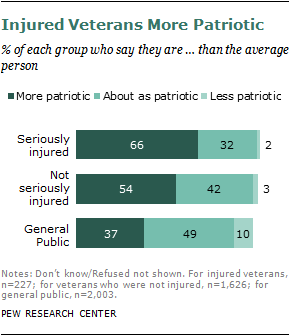 Compared with their comrades who were not seriously hurt, injured veterans are more likely to say they are more patriotic than the average American and are more supportive of a military draft. More than two-thirds also would recommend enlisting to a young person who was close to them.

On issues of public policy, veterans who were badly hurt while serving are more likely than uninjured veterans (42% vs. 29%) to support a return to conscription, which ended in 1973 when the military went to an all-volunteer force.

But on other issues, the differences between injured and uninjured veterans are small or nonexistent. Nearly half of both groups say using overwhelming military force is the best way to defeat terrorism (48% for injured veterans and 46% of other veterans). And the same proportion believes that the United States should pay less attention to problems overseas (61%).

Their views of President Obama are likewise similar: 41% of injured veterans and 40% of other service members say they approve of the way Obama is handling his duties as commander in chief.

For Many Injured Veterans, A Lifetime of Consequences
Section 1: The Consequences of Serious Injuries
EmploymentAttitudes toward their Service and their Country
Section 2: Injured Post-9/11 Veterans Section 3: The Disabled Veteran