To broaden and deepen the analysis of America’s wounded warriors, Pew researchers turned to another data source with a larger sample of veterans who had been physically or emotionally harmed while serving in the military.

In July 2010, the Census Bureau re-interviewed 9,739 veterans who had been questioned the previous year as part of the bureau’s monthly Current Population Survey. The sample included 1,058 veterans who had suffered a service-related disabling injury or condition and had received an official disability rating from the Department of Defense or Department of Veterans Affairs. This rating, which ranges from zero to 100% depending on the degree of permanent impairment, is used to determine the size of the veteran’s disability payment.7

This larger sample of disabled veterans was then used to create a demographic profile of veterans who had been adversely affected physically or emotionally by their time in the military.

A word of caution is in order. Suffering a disabling injury or condition and being seriously injured are not necessarily equivalent conditions. A service member could break an arm while serving but have it heal completely and suffer no lasting ill effects. Meanwhile, other service members might become partially disabled from a disease contracted while serving abroad but not consider themselves to have been seriously injured. And as the percentage rating scale suggests, a veteran can lose very little functionality and still be classified as disabled by the Department of Veterans Affairs or the Defense Department.

But a comparison of the two surveys suggests that the samples of disabled and seriously injured veterans closely resemble each other in terms of key demographic characteristics, including gender, race and branch of service.

The Demographic Composition of Disabled Veterans

The CPS survey found that about 13% of all current veterans have a service-related disability, similar to the 10% of veterans in the Pew survey who report they had suffered a serious injury while serving.

Among all disabled veterans, about three-in-ten (28%) are slightly impaired, having lost less than 10% of their physical functioning. Nearly six-in-ten disabled veterans are at least 30% disabled, meaning that their service-related injury or condition has permanently reduced their overall functionality by 30% or more. About one-in-eight (13%) are 100% disabled. 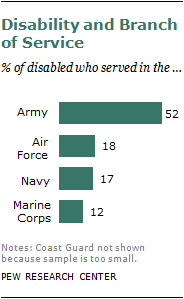 But these overall percentages mask an important difference. Marines are significantly overrepresented among the ranks of disabled veterans. While Marines make up about 10% of all veterans, they comprise a disproportionately large share of the disabled. Overall, more than one-in-six Marines (17%) are disabled, compared with 14% of all Army and Air Force veterans and 11% of Navy veterans. 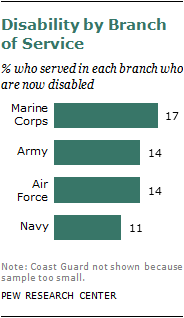 Two factors largely explain this difference: Marines are more likely than other service members to have served in a combat zone during the post-9/11, Vietnam and World War II eras (54% for Marines vs. 43% for other branches). Predictably, those who were in combat are more than three times as likely to be disabled as those who never saw combat (24% vs. 8%).

On the surface, disabled veterans have fared about as well in the post-recession employment market as other veterans and the non-veteran population. Among all veterans, those with a service-connected disability had an unemployment rate of 9.5% in July 2010, about the same as the rate for veterans with no disability (8.6%) or non-veterans (9.7%). 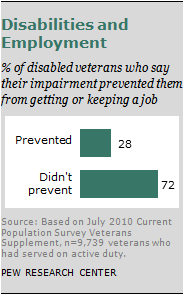 But these figures may paint an overly positive picture of the employment situation for disabled veterans. About 14% of all disabled veterans are classified as too disabled to work and are therefore not included in government calculations of the unemployment rate.

In addition, nearly three-in-ten disabled veterans (29%) are classified as being full-time retirees and also not included in the official unemployment calculation.

In fact, many of these veterans may be reluctant retirees. In answer to another CPS question, nearly a third (32%) of disabled veterans who are retired say their service-connected disability currently keeps them from “getting or holding a job.”

The job market also is considerably less welcoming for veterans with significant disabilities who are willing to work than it is for veterans whose disabilities are less severe. According to the CPS survey, the unemployment rate was significantly higher for the 37% of disabled veterans in the workforce who had a disability rating of 50% or more compared with those with a lower rating (13% vs. 8%).

When Being Disabled Is a Disability

Getting a job is hard for many disabled veterans. And even when they find work, their disability sometimes makes it difficult for them to stay on the job. Nearly three-in-ten disabled veterans say their impairment prevented them from getting or keeping a job at some point in their working lives.

Those with the greatest degree of disability encountered the most obstacles in the workplace. Two-thirds of those who are 100% disabled say their impairment has prevented them from getting a job. In contrast, only about 15% of those who had a disability rating of less than 30% experienced similar problems.