Because of the trade-off, it is possible that not every member of a multi-generational household is better off as a result of the living arrangement, but the arrangement can provide a safety net for some. For example, parents who take in an unemployed adult child may be financially strained as a result but their action may have pulled the child out of poverty.

Poverty rates are computed across all people, not just household heads. Generally speaking, members of a household are assigned the same poverty status.12 It should be noted that the demographic characteristic of a person may not be the same as that of the household head. For example, some native-born people reside in households with foreign-born heads and vice versa. Similarly, people of a given race and ethnicity may live in a household with a head of another race and ethnicity. Poverty estimates in this report are based on the characteristics of people, not the characteristics of the head of the household in which they live. The report does not attempt to identify whether individual members of multi-generational households may be better or worse off living apart.13

The evidence suggests that the formation of multi-generational households may result in economic benefits for residents of those households—boosting household income, in spite of the increase in household size, and placing a safety net under those teetering on the economic ledge.

The formation of multi-generational households does appear to lift people out of poverty. That is true for the overall population and for subpopulations that are generally less well off than average, including unemployed workers, young adults, Hispanics, blacks and immigrants. Poverty levels for many of these groups are substantially less within multi-generational households.

Economic Outcomes for the Overall Population by Household Type 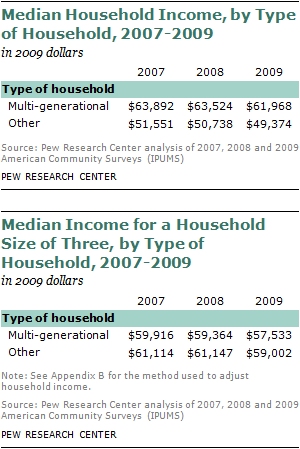 It is necessary, however, to account for size differences: Multi-generational households average 4.3 residents, compared with only 2.4 for other households. Using the methodology described in the appendix, all household incomes are standardized to a household size of three.

This benefit has prevailed consistently since 2007. The poverty-reducing role of multi-generational households is notable in view of the fact that those who typically have lesser financial resources than average—unemployed workers, young adults, Hispanics, blacks and immigrants—are also more likely to reside in these households. 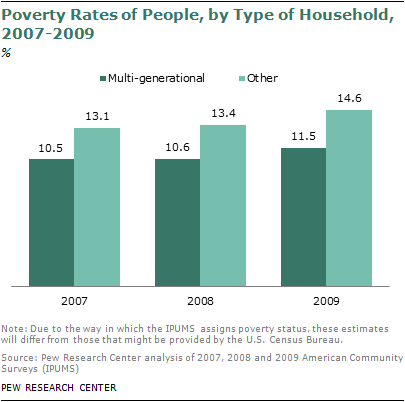 Economic Outcomes for the Unemployed

Households that did not have unemployed residents had size-adjusted median incomes of about $60,000 in 2009. For these households, median incomes were similar regardless of whether they were multi-generational.

Income and Poverty by Demographic Characteristics 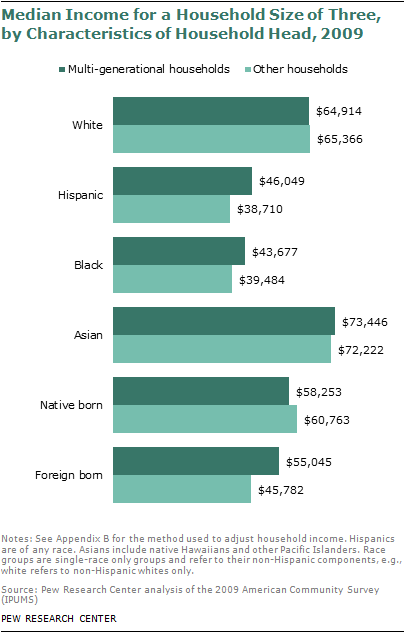 Who pays the bills? In most households with parents and minor children, it is mom, dad or both. But in multi-generational households it could also be the adult child, the elderly parent or the grandparent. This section considers the issue of financial responsibility from two perspectives: the share accounted for by a generation, for example, mom and dad together; and the share accounted for by an individual, such as mom or dad alone.

The generation in charge of a household—the head alone or in combination with a spouse, sibling, sibling-in-law, partner or another individual of the same generation—typically accounts for the largest share of household income. But the distribution differs sharply by household type: There are more sources of household income in multi-generational households. 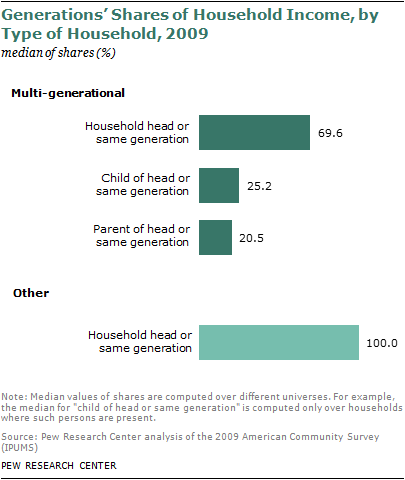 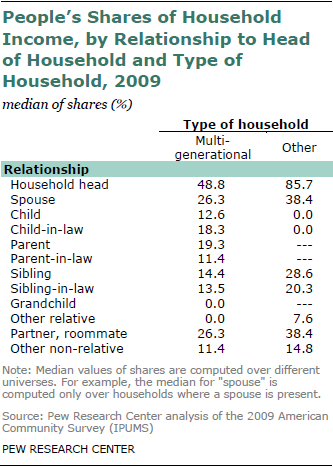 In more than half of households without multiple generations, householders and others of that generation are the only sources of income. Thus, the median share of this generation in households that are not multi-generational is 100%. These share levels have been steady over duration of the recession.

A similar pattern emerges when household income is sourced across individual members of the household. A household head alone accounts for slightly less than half (48.8%) of income in a multi-generational household. Myriad individuals also add to total income in these households. A child of the head of a multi-generational household typically accounts for 12.6% of income, a child-in-law 18.3% and a householder’s parent 19.3%.20 Significant shares also come from parents-in-law, siblings, partners and others.

Heads of other households account for 85.7% of household income. Because these households have fewer family members (and, therefore, fewer potential earners), typical shares of spouses (38.4%), siblings (28.6%) and siblings-in-law (20.3%) are also greater than in multi-generational households. 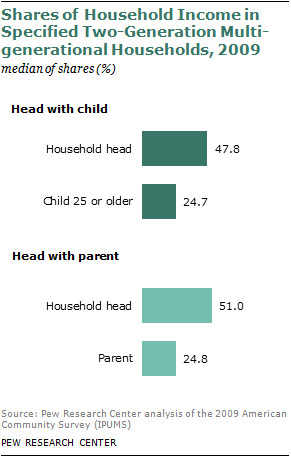 The majority of multi-generational households (56%) consist of two adult generations: either a head with a child 25 or older or a head with a parent in the home.21 Both adult children and parents of householders account for sizable shares of the incomes of these households.

In 2009, employed heads of multi-generational households typically accounted for 54.1% of household income. But if they were unemployed, their share dropped by a third, to 35.3%. In other households, the heads were responsible for about the same share of household income regardless of employment status—83.2% if employed and 80.8% if unemployed.

Reflecting differences in the average number of earners across households, there are more sources of income in Hispanic and Asian households than in white and black households. The same is true in immigrant households, the vast majority of which are headed by Hispanics and Asians, compared with headed by the native born. 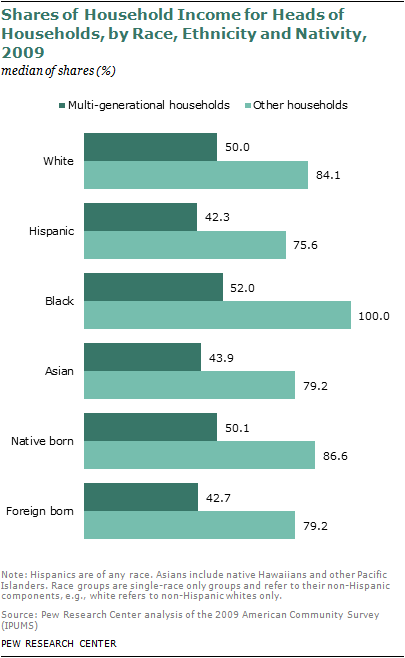