The increase in adult children (ages 25 and older) living in their parents’ homes was a driving force boosting the number of multi-generational households. The number of households in which a child age 25 or older lived with a parent increased 590,000 from 2007 to 2009. That was a marked change of pattern from recent years—from 1990 to 2006, the number of these households did not significantly change. 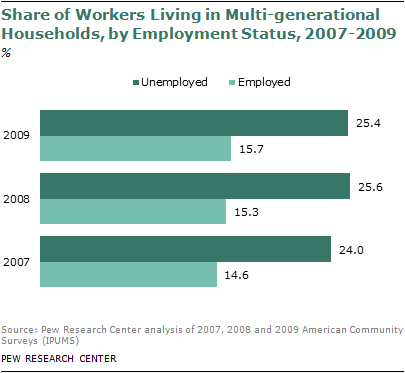 Moving in with family can make economic sense. For some groups, the incomes of multi-generational households are higher than the incomes of other households. Living together may also reduce poverty—in 2009, the poverty rate among residents of multi-generational households was 11.5%, compared with 14.6% for those in other households. The potential benefits are even greater for the most economically vulnerable—unemployed workers, young adults, Hispanics and blacks.

The rapid increase in multi-generational living arrangements during the Great Recession is associated with a spike in unemployment. The unemployed are much more likely than the employed to live in multi-generational households—25.4% vs. 15.7% in 2009. This differential did not change much during the recession, but the number of unemployed people did, increasing by 7.2 million from 2007 to 2009.10

Other than the unemployed, young adults ages 25 to 34, Hispanics, blacks and immigrants realize notable economic benefits from multi-generational living arrangements. These groups also registered among the greatest increases in those types of households from 2007 to 2009. Although household heads retain the principal burden of providing income in multi-generational households, adult children and parents of householders also account for significant shares of the income of these households.

Next: Chapter 2: Income and Poverty in Multi-Generational and Other Households
← Prev Page
Page1You are reading page2Page3Page4Page5Page6Page7
Next Page →