College presidents are adept at using multiple forms of technology. They have high rates of access to technology, with 91% of presidents reporting they use a laptop computer at least occasionally, 88% saying they use a smartphone and 87% saying they use a desktop computer. They are also early adopters of new technologies such as tablet computers and e-readers. Roughly half of the college presidents surveyed (49%) report that they use a tablet computer (such as an iPad) at least occasionally, and 42% use an electronic book device (such as a Kindle or Nook). Just under one-third of presidents (32%) report using a mobile phone that is not a smartphone on at least an occasional basis.

Roughly one-quarter (26%) of the college presidents surveyed say they use a tablet computer several times a day. Nearly one-in-ten (8%) use an e-reader this often. 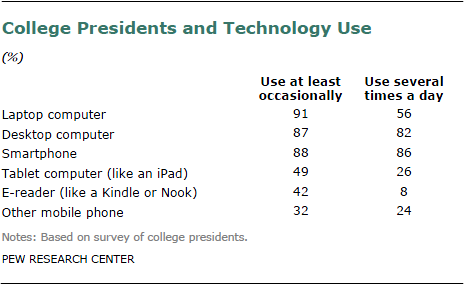 Technology use by college presidents is fairly consistent across different sectors of higher education. While the institutions may differ in the degree to which they have embraced online learning, their leaders are equally adept at using many of the newer technologies. Younger presidents (under age 50) are more likely than their older counterparts to use laptop computers at least daily. There are notable patterns by region as well. Presidents of colleges located in the East are less likely than their counterparts in other regions to use a smartphone daily. East Coasters also lag behind the rest of the country in Facebook adoption. While presidents of 50-55% of the colleges in the Midwest, South and West use Facebook at least occasionally, just 37% of East Coast presidents use the social network.

The Digital Revolution and Higher Education Overview I. Online Learning II. Educational Hardware and Content
III. College Presidents and Their Use of Technology
Appendix 1: Survey Methodology