As of May 2011, 13% of online adults use the status update service Twitter. That represents a significant increase from the 8% of online adults who identified themselves as Twitter users the first time we asked our “stand-alone” question about Twitter adoption in November 2010.1 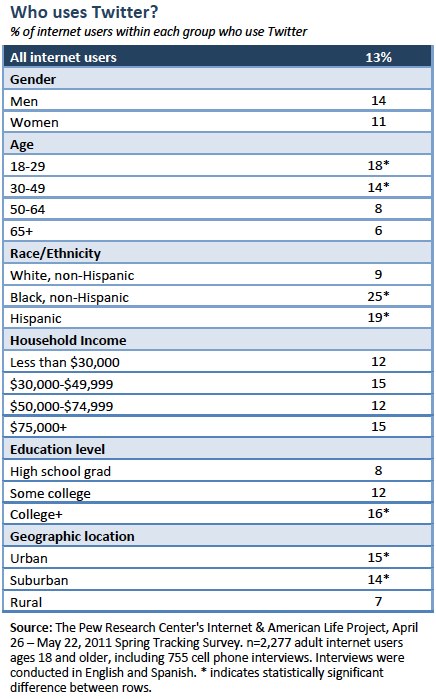 For the first time in our May 2011 survey, we also included a follow-up question asking cell phone-owning Twitter users2 if they access the service on their phones and found that half (54%) access the service in this way. Due to sample size limitations, we are unable to provide detailed statistics on mobile Twitter usage by different demographic groups. 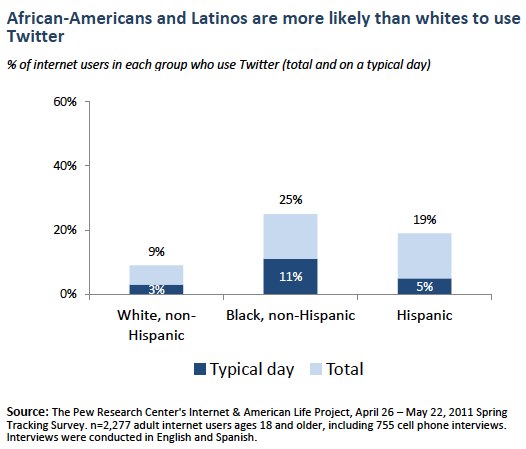 Although young adults continue to have relatively high rates of Twitter usage, the number of 30-49 year olds who use the service has doubled since late 2010—from 7% of such users in November to 14% in May 2011. This growth trend is especially pronounced among 25-34 year olds—Twitter use for this cohort roughly doubled between November 2010 and May 2011, from 9% to 19%—although growth in Twitter use among internet users ages 35-44 was notable as well (from 8% in late 2010 to 14% in spring 2011). By contrast, Twitter adoption over the same time period was stable among the youngest adults (those ages 18-24) who were the most likely to use the service in our first survey. 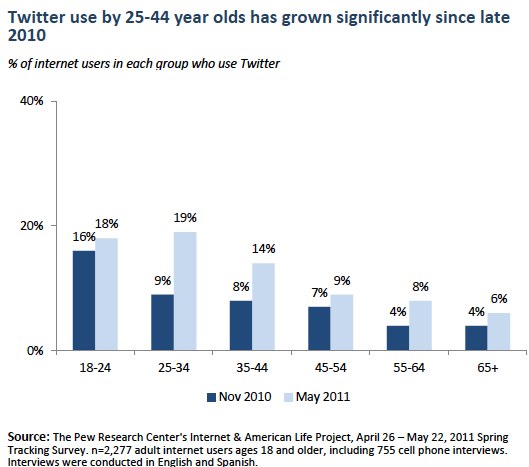 This report is based on the findings of a survey on Americans’ use of the Internet. The results in this report are based on data from telephone interviews conducted by Princeton Survey Research Associates International from April 26 to May 22, 2011, among a sample of 2,277 adults, age 18 and older. Telephone interviews were conducted in English and Spanish by landline (1,522) and cell phone (755, including 346 without a landline phone). For results based on the total sample, one can say with 95% confidence that the error attributable to sampling is plus or minus 2.4 percentage points. For results based Internet users (n=1,701), the margin of sampling error is plus or minus 2.7 percentage points. In addition to sampling error, question wording and practical difficulties in conducting telephone surveys may introduce some error or bias into the findings of opinion polls.

A combination of landline and cellular random digit dial (RDD) samples was used to represent all adults in the continental United States who have access to either a landline or cellular telephone. Both samples were provided by Survey Sampling International, LLC (SSI) according to PSRAI specifications. Numbers for the landline sample were selected with probabilities in proportion to their share of listed telephone households from active blocks (area code + exchange + two-digit block number) that contained three or more residential directory listings. The cellular sample was not list-assisted, but was drawn through a systematic sampling from dedicated wireless 100-blocks and shared service 100-blocks with no directory-listed landline numbers.

The second stage of weighting balances sample demographics to population parameters. The sample is balanced by form to match national population parameters for sex, age, education, race, Hispanic origin, region (U.S. Census definitions), population density, and telephone usage. The White, non-Hispanic subgroup is also balanced on age, education and region. The basic weighting parameters came from a special analysis of the Census Bureau’s 2010 Annual Social and Economic Supplement (ASEC) that included all households in the continental United States. The population density parameter was derived from Census 2000 data. The cell phone usage parameter came from an analysis of the January-June 2010 National Health Interview Survey. Following is the full disposition of all sampled telephone numbers: 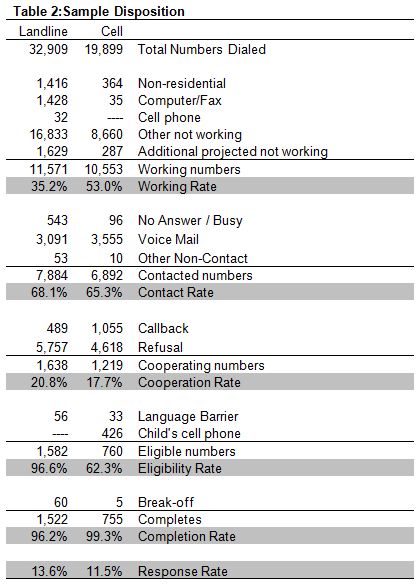