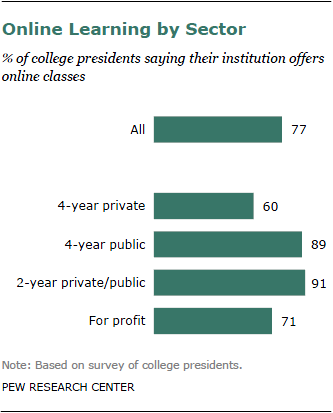 In an effort to make higher education more flexible and accessible to more people, many American colleges and universities offer online classes and even grant degrees for courses of study in which all the course work was completed online. Of the 1,055 college and university presidents interviewed for the Pew Research survey, 77% reported that their institution offers courses for which the instruction takes place exclusively in an online environment. 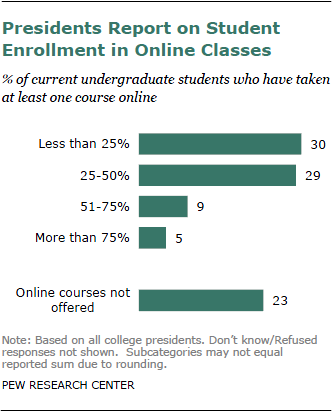 While many schools offer online courses, only a minority of students are taking advantage of these offerings. Again, adoption of online learning by students differs across institutions. 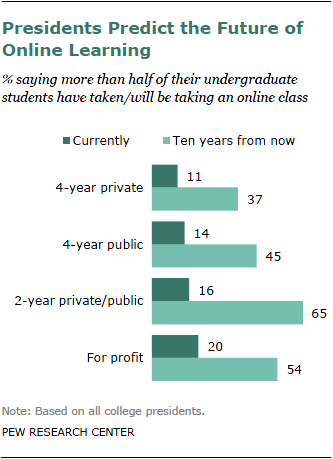 College presidents see the potential for growth in this area. Fully half of those surveyed predict that 10 years from now a majority of their undergraduate students will be taking a class online. The presidents of two-year colleges anticipate the most growth in this area. Roughly two-thirds (65%) say that in 10 years, most of their students will be taking at least one online course (up from 16% currently). A majority (54%) of the leaders of for-profit institutions also predict that by 2021 most of their students will be enrolled in online classes.

The Value of Online Learning 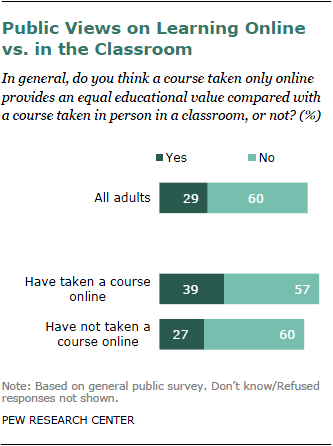 Along with the growing prevalence of online learning comes a real sense of skepticism among the public about the value this format offers students. Respondents in the general public survey were asked whether they thought a course taken online provides an equal educational value as a course taken in person in a classroom. Only 29% of all respondents said online classes offer an equal value. Six-in-ten said online courses do not offer the same value as classes taken in person, and 11% were unsure.

Views on this issue are fairly consistent across major demographic groups. In spite of the fact that they have grown up in a digital world, young adults are as skeptical about online learning as are their older counterparts. Among those younger than 30, only 28% say a course taken online is equal in value to a course taken in person; 67% say it is not. The same is true for those ages 30 and older: 30% say an online class offers the equivalent value of a class taken in person, 58% say it does not.

Most college graduates have a negative view of the value of a class taught online as opposed to one taught in a more traditional classroom setting. Only about one-in-five college graduates (22%) say an online course offers an equal educational value, while 68% say it does not. Among non-college graduates, 32% say online classes are equal in value to classes taught in person.

Those who have personal experience with online learning have a somewhat more positive view of its value. Even so, a majority rejects the notion that online classes offer the same educational value as in-person classes. Roughly four-in-ten (39%) of those who have taken an online course say online classes in general provide an equal value when compared with classes taken in person in a classroom, and 57% say they do not. By comparison, 27% of those who have never taken a class online say the value is equivalent to being in the classroom.

Presidents who lead colleges where online learning is part of the curriculum have a much more positive assessment of the value these classes provide than those who oversee institutions with no online classes. Among presidents of colleges that offer online courses, 59% say these classes are equal in value to in-person classes. Only 21% of presidents whose institutions do not offer online classes agree.

Looking across different sectors of higher education, presidents of two-year colleges are among the most likely to say online classes are just as valuable as classes taken in person (66%). More than half of the presidents of for-profit colleges (54%) agree that online classes provide an equivalent educational value. Among the presidents of four-year public universities, opinion is more evenly divided: 50% say a course taken online is equal in value to a course taken in person; 48% say it is not. The leaders of four-year private colleges are among the most skeptical about the value of online learning: 36% say online classes provide the same value as classes taken in person, while 62% say they do not.

Online courses are provided not simply to increase student access to certain classes, but in many cases the courses are offered as a part of a fuller online degree program. Of the roughly three-quarters of American campuses that offer online courses, more than half (58%) offer degrees for programs where all of the course work has been completed online, according to their presidents. Online degrees are most prevalent at for-profit institutions, where 71% offer them, and at four-year public institutions, of which two-thirds (66%) offer degrees for work completed entirely online. Among two-year colleges that offer online classes, 54% also offer online degrees, and among four-year private schools, less than half do so (47%).

Reading, writing, and research in the digital age

Few students likely to use print books for research