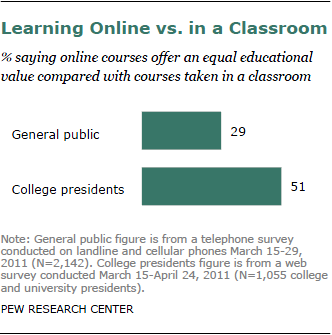 These findings are from a pair of Pew Research Center surveys conducted in spring 2011. One is a telephone survey taken among a nationally representative sample of 2,142 adults ages 18 and older. The other is an online survey, done in association with the Chronicle of Higher Education, among the presidents of 1,055 colleges and universities nationwide.1

More than three-quarters of the nation’s colleges and universities now offer online classes, according to the survey of college presidents, and about one-in-four college graduates (23%) have taken a course online, according to the general public survey. Among those who have graduated in the past decade, the figure rises to 46%. Adults who have taken a course online have a somewhat more positive view of the value of this learning format: 39% say a course taken online provides the same educational value as one taken in person, a view shared by only 27% of those who have not taken an online course.

Online learning is more common in some sectors of higher education than in others. Among the presidents of four-year public colleges and universities, 89% report that their institution offers classes online. Just six-in-ten presidents of private four-year colleges report the same. These private college presidents are among the most skeptical about the value of online learning. Only 36% believe a course taken online provides the same value as a class taken in person. This compares with 50% of four-year public university presidents.

The vast majority of two-year colleges offer online courses (91%), and their leaders are among the most likely to believe that online learning is comparable to learning in a classroom. Two-thirds of the presidents of two-year colleges say an online course provides an equal educational value when compared with a course taken in person. Among the leaders of for-profit colleges and universities, 71% report that their institutions offer classes online and more than half (54%) say these classes offer the same value as classes taken in person.

Of those colleges and universities that offer online courses, nearly six-in-ten (58%) grant degrees for which all the course work can be completed online, according to their leaders. Public institutions are more likely than private ones to provide this option (66% vs. 47%). 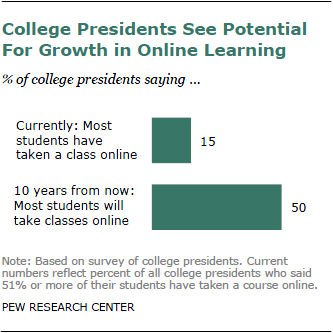 Over the past decade, enrollment in online courses at colleges and universities around the country has grown at a greater rate than overall higher education enrollment. According to surveys conducted by the College Board and the Babson Survey Research Group, the number of students at degree-granting postsecondary institutions taking at least one online course increased by 21% from the fall of 2008 to the fall of 2009. Over that same one-year period, total enrollment increased by only 1.2%.2

College presidents see this trend continuing. While 15% report that more than half of their current undergraduate student body has taken at least one course online, 50% predict that 10 years from now a majority of their students will be taking classes online.

Whether learning takes place in a virtual classroom or in a more traditional setting, the textbooks used by college students are becoming increasingly high-tech. Nearly two-thirds of the presidents surveyed (62%) predict that 10 years from now more than half of their undergraduate textbooks will be entirely digital.

Laptops, the Internet and Plagiarism

Through their use of cellphones, smartphones, tablet computers and laptops, today’s college students are accustomed to being constantly connected. Increasingly, this has meant bringing these technologies with them into the college classroom. In the Pew Research survey of the general public, more than half of recent college graduates and currently enrolled college students report that they have often (35%) or sometimes (22%) used these types of devices during class time. One-in-five (19%) say they hardly ever used these devices in the classroom and 22% say they never have.3

The institutional rules about the use of laptops and other portable computers during class tend to vary across and even within colleges and universities. A narrow majority of college presidents (56%) say that at their institution it is up to the individual instructor to decide whether students can use laptops or other portable computers in the classroom. Four-in-ten college presidents (41%) say that at their institution, students are allowed to use laptops during class. Only 2% say laptops are prohibited in class. 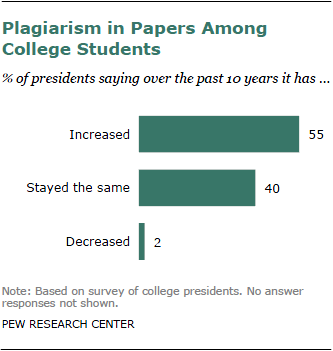 Students’ ease of access to the digital world has created some problems for educators. A majority of college presidents surveyed say they have seen a rise in plagiarism over the past decade, and most believe that technology is a major factor behind that rise. Some 55% of college presidents say plagiarism has increased in college students’ papers over the past 10 years. An additional 40% say that plagiarism has stayed the same over this period. Just 2% say it has decreased.

Of those who say plagiarism is on the rise, the overwhelming majority (89%) believe that computers and the internet have played a major role in this trend. Only 7% say these new technologies have played a minor role.

A Disproportionate Impact across Institutions 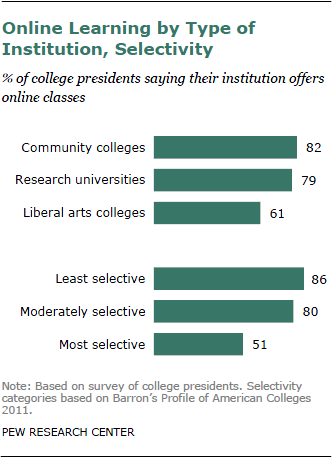 These broad trends in technology use are not taking hold at the same pace throughout the nation’s institutions of higher learning. There is wide variance in adoption rates among colleges and universities. Aside from the differences among public, private, two-year and for-profit institutions, there are clear divisions across other dimensions. The presidents of liberal arts colleges and highly selective institutions are less likely than other college presidents to report that their schools offer online classes. And at the highly selective schools, fewer students are taking online classes when they are offered.

For example, among the presidents of four-year liberal arts colleges, 61% report that their institution offers classes that are taught exclusively online. By contrast, 79% of the presidents of research universities and 82% of those at community colleges say they offer online classes to students.4

This report is based on two Pew Research Center surveys conducted in the spring of 2011. The first, a survey of college presidents, was done in association with the Chronicle of Higher Education. The presidents’ survey was conducted online from March 15 through April 24, 2011, among the leaders of 1,055 two-year and four-year private, public and for-profit colleges and universities with enrollments of 500 or more. In addition, the Pew Research Center conducted a survey of the general public from March 15 to 29, 2011. The general public survey was conducted by landline and cellular telephone among a nationally representative sample of 2,142 adults living in the continental United States.5

Analysis and writing of this report was carried out jointly by the staffs of the Pew Research Center’s Social & Demographic Trends project and the Pew Internet & American Life Project.

The report is divided into three sections: Online Learning; Educational Hardware and Content; and College Presidents and Their Use of Technology. A detailed methodology and topline results for the general public and the college presidents surveys can be found in the appendices.

Next: I. Online Learning
← Prev Page
Page1You are reading page2Page3Page4Page5Page6
Next Page →

The Digital Revolution and Higher Education
Overview
Looking Ahead: More Growth in Digital LearningLaptops, the Internet and PlagiarismA Disproportionate Impact across InstitutionsOther Key FindingsAbout the Report
I. Online Learning II. Educational Hardware and Content III. College Presidents and Their Use of Technology Appendix 1: Survey Methodology