The first step in identifying the clusters was to create a simple scale that totaled the number of times a respondent said the trends were good for society, bad for society or made no difference. Respondents received a score of 1 each time they answered that a trend was good for society, -1 for each time they said a trend was bad for society and no points if they said the trend had no impact on society. These scores were the raw data used in the cluster analysis to create the three groups described in this report. 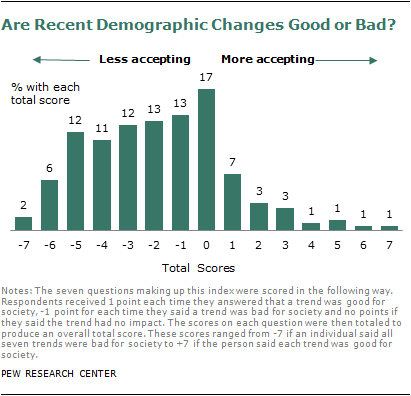 The scores on each question were totaled to produce an overall score, which was used to create the interactive graphics that accompany this report. These scores ranged from -7 if an individual said all seven trends were bad for society to +7 if someone said each trend was good for society. If an individual said each trend had no impact on society—or that equal numbers of trends were good and bad—that person’s score would be zero.

While these scores became the raw data for the cluster analysis and the interactive graphic that accompanies this report, they tell an intriguing story on their own. Only a handful of people say all of the trends are bad (2%) or all good (1%). Overall, about two-thirds of all respondents (68%) got negative scores (-1 to -7), indicating that, overall, the number of trends they thought were bad for society outnumbered those they thought were good. Conversely, only 17% thought the trends had, on balance, been neither good nor bad, while 17% scored between 1 and 7, indicating they were overall more optimistic than pessimistic about the impact of these changes. 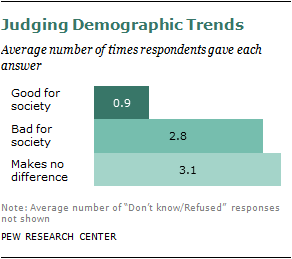 The Public Renders a Split Verdict On Changes in Family Structure
Appendix: Creating a Scale