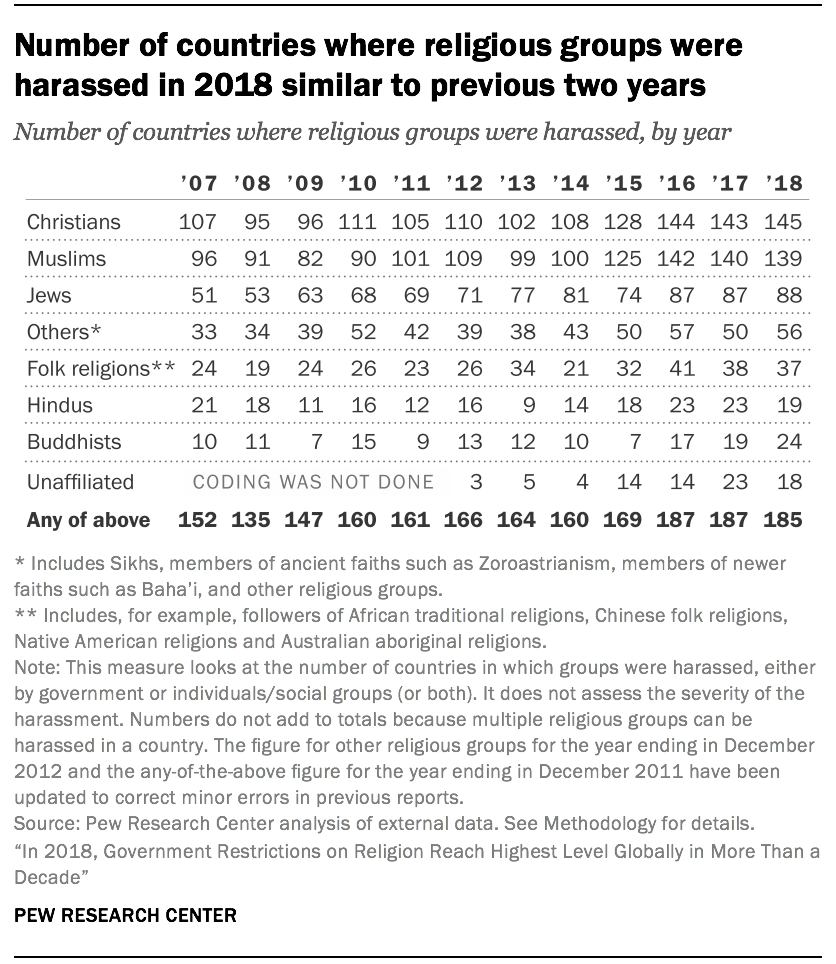 In 2018, this study’s sources continued to report harassment against religious groups – either by governments or social groups and individuals – in the vast majority of countries around the world (185 out of 198).29 This figure ticked down slightly from 187 the previous year, marking the first decrease since 2014 in the number of countries where harassment was observed.

Harassment can include a wide range of actions – from verbal abuse to physical violence and killings – motivated at least in part by the target’s religious identity. In addition to harassment of religious groups and persons, this study measures harassment against those who are religiously unaffiliated, including atheists, agnostics and humanists.

In 2018, Christians reportedly were harassed in 145 countries, up from 143 countries in 2017. In Israel, for instance, an Ethiopian Christian monk was reportedly injured by police officers who were attempting to evict him from his church.30 And in Burundi, a Christian man died after he was imprisoned and allegedly beaten by police for refusing – on the basis of his religious conscience – to register to vote.31

Muslims were harassed in 139 countries in 2018, down slightly from 140 countries in 2017. In Argentina, a Muslim woman was not permitted to use a swimming pool because she was wearing a burkini.32 And in Lebanon, three brothers reportedly killed a Sunni man after accusing him of making blasphemous remarks in a market.33

Jews were harassed in 88 countries – a slight increase from 87 countries in 2017 – and continue to be harassed in the third highest number of countries, despite the group’s relatively small population size (0.2% of the global population). In France, an 85-year-old Holocaust survivor was stabbed to death in March 2018, and President Emmanuel Macron said publicly that the victim was “murdered because she was Jewish.”34

Hindus were harassed in 19 countries – declining from 23 countries the previous two years. A Hindu priest was killed in Bangladesh in an attack authorities believed may have been motivated by anti-Hindu sentiment.35

Buddhists experienced the largest increase of any single religious group in the number of countries where they faced harassment, from 19 in 2017 to 24 in 2018 – the highest number since the study began in 2007. In Sri Lanka, a Buddhist group was denied permission to construct a shrine on a mountain that they claimed to have a connection to.36 And in Indonesia, a Buddhist woman was convicted of blasphemy for complaining about the volume of the Islamic call to prayer.37

Religiously unaffiliated people (including atheists, agnostics and people who don’t identify with any religion) were harassed for religious reasons in 18 countries in 2018, down from 23 the previous year – the biggest decrease of any group. Still, in Egypt, an atheist blogger was arrested and detained for four days after being charged with insulting Islam and Shariah and disrupting communal peace with a series of YouTube videos.38

Religious groups face harassment from a variety of actors, but some tend to experience more abuse from governments than from individuals or groups in society, and vice versa. In 2018, Buddhists, Christians, Hindus, Muslims and religiously unaffiliated people were harassed by government actors in more countries than they were by individuals or groups not affiliated with the government, such as other religious groups, hate groups or secular groups. Conversely, Jews have faced more social harassment than government harassment in each year since the study began in 2007. This pattern continued in 2018, when social hostilities against Jews were reported in 77 countries, compared with 59 countries where Jews experienced government harassment.

Adherents of folk religions faced both social hostilities and government harassment in 23 countries in 2018. For example, a Vodou practitioner in Haiti was killed after he provided treatment to an ill woman who later died.39

Other religious groups beyond those separately analyzed above – including Baha’is, Scientologists, Sikhs, Rastafarians and Zoroastrians – experienced government harassment in twice as many countries as they faced social hostilities (50 countries vs. 25). For instance, in Canada, the Quebec Appeal Court upheld the right of the legislature to deny entrance to individuals with a kirpan, a sacred dagger carried by Sikhs.40 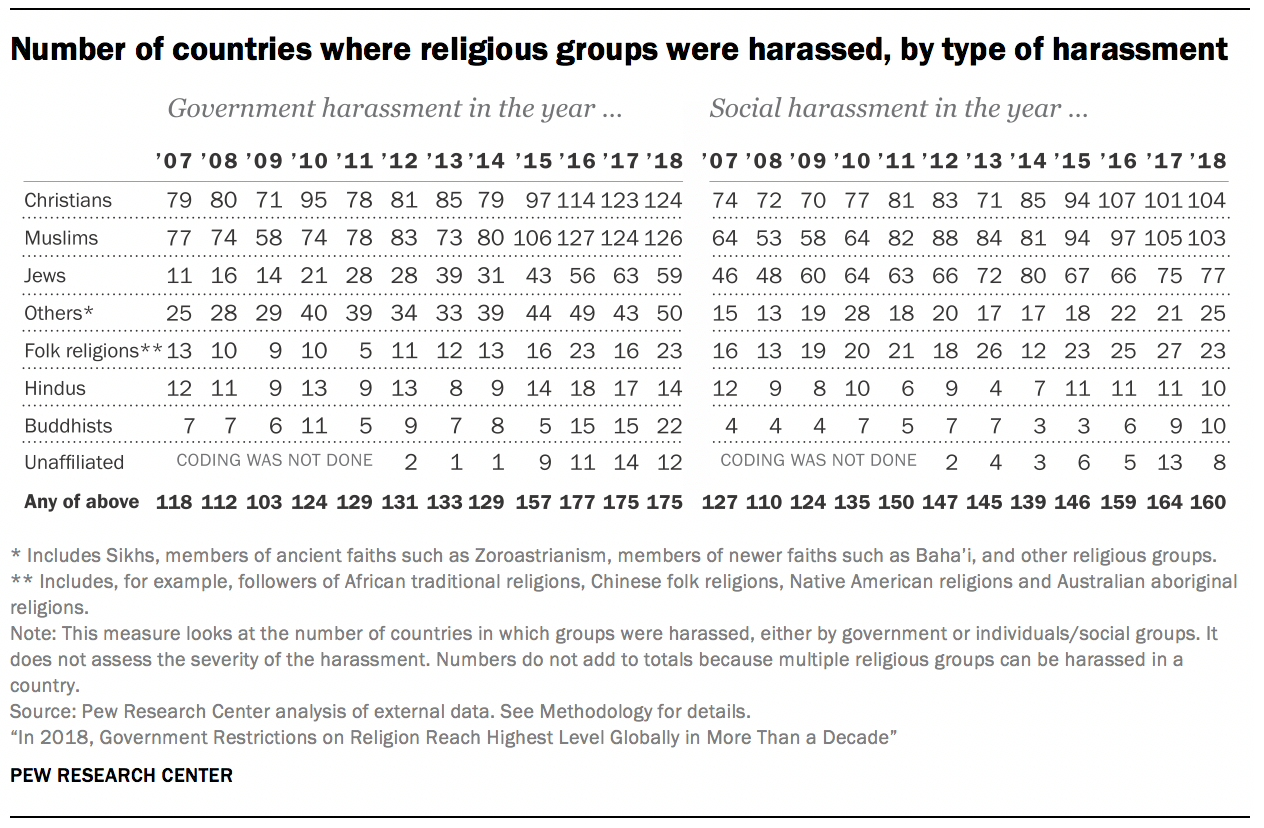 Harassment of Christians and Muslims by region

Beyond the different types of harassment religious groups face, there also are regional variations in where the two largest religious groups are more likely to face harassment. The Middle East-North Africa region had the largest share of countries where Christians were harassed in 2018. Of the 20 countries in the region, 19 had some form of harassment targeting Christians (either by governments or social groups). Social harassment occurred in 15 countries, the highest share (75%) since the beginning of the study, while government harassment of Christians was reported in 19 countries in the region, down from all 20 in 2017. For example, in Algeria, a court denied an interfaith couple’s marriage application because one of them was a Christian.41

A higher number of countries experienced government harassment (rather than social harassment) of Christians in every region but the Americas, where Christians were harassed by governments in 16 countries and social groups in 17 countries.

Next: 3. In 2018, government restrictions rose in most regions, but social hostilities declined
← Prev Page
Page1Page2You are reading page3Page4Page5Page6Page7
Next Page →