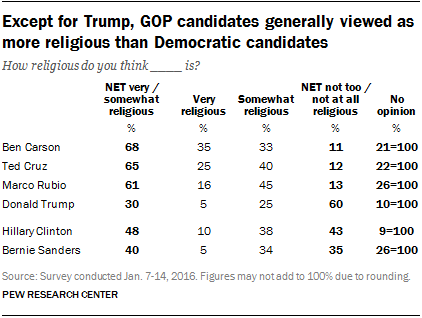 The major exception to this pattern is Donald Trump. Just three-in-ten Americans say Trump is very or somewhat religious, while six-in-ten say Trump is not too religious (22%) or not at all religious (37%).

Religion and the GOP candidates

Republicans with a college degree are more inclined than those with less education to say that Carson, Cruz and Rubio are religious people; Republicans with less than a college degree are more likely than college graduates to express no opinion about the religiousness of these candidates. In rating Donald Trump, however, there are no statistically significant differences on this question by level of education. 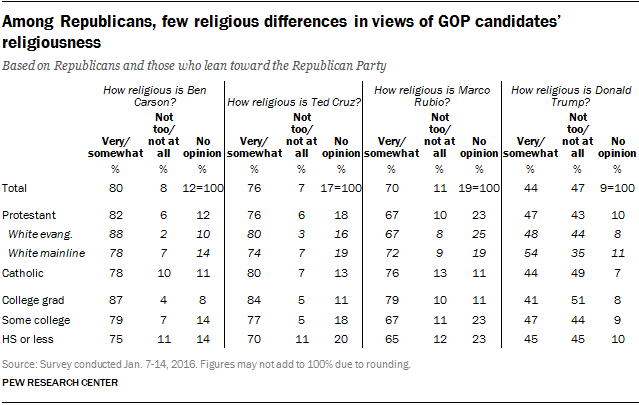 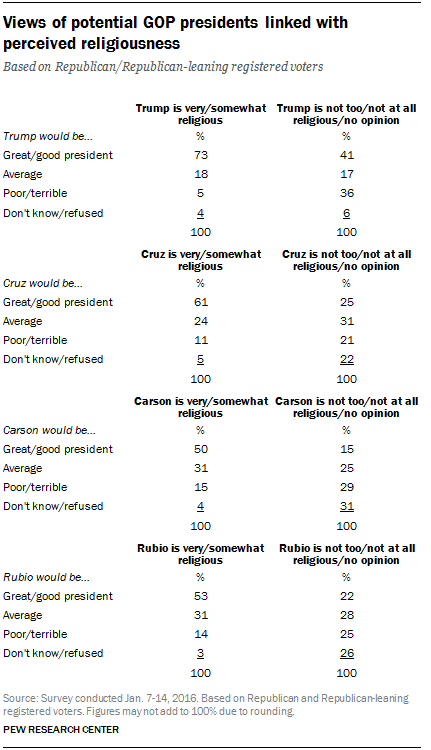 More broadly, among registered voters, evangelical Republicans stand out from mainline Protestants and Catholics in their views about a potential Carson presidency. Most white evangelical Republicans (62%) say they think Carson would be a good or a great president, while 39% of Catholics and 37% of white mainline Protestants agree. Religious differences are smaller in expectations for other candidates.

For a full analysis of voters’ assessments of the presidential candidates’ prospects for success in the White House, see the Pew Research Center report “Voters Skeptical That 2016 Candidates Would Make Good Presidents.”

Religion and the Democratic candidates 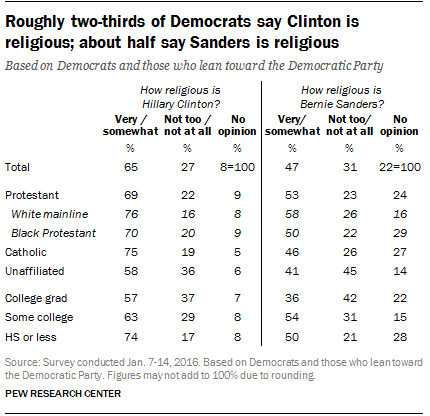 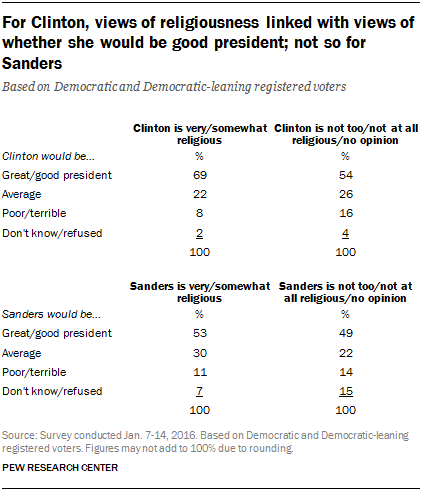 Among Democrats who are registered to vote, those who see Clinton as a religious person are more likely than those who say she is not religious to think she would be a good or great president. The survey finds no such link between the perceived religiousness of Bernie Sanders and views of whether he would make for a good president. Roughly half of Democratic registered voters who think Sanders is religious believe he would be a good or great president (53%), as do 49% of Democrats who think Sanders is not particularly religious (or who do not know how religious he is). 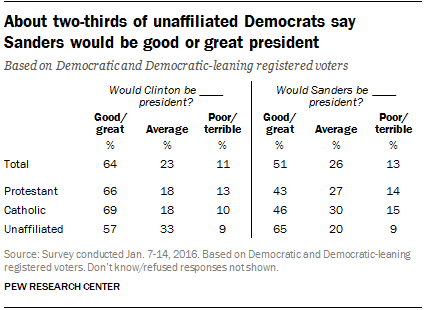 Trends in perceptions of religiousness: Obama and Clinton 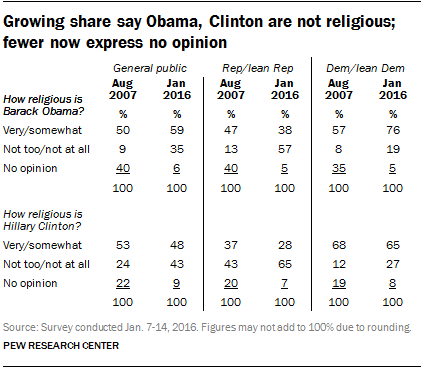 Roughly one-third of Americans now say that Obama is not too or not at all religious, up from 9% in 2007. Over this period, the share expressing no opinion of Obama’s religiousness declined from 40% to 6%. The share of Americans saying Clinton is not religious now stands at 43%, up from 24% in 2007.

The shift in opinion has been most pronounced among Republicans. A majority of the GOP now say that both Obama and Clinton are not too or not at all religious (57% and 65%, respectively). Democrats are also now more likely to express an opinion on this question, and there has been an increase in the share of Democrats who say these political figures are not particularly religious. However, there are still far more Democrats who say Obama and Clinton are at least somewhat religious than who express the opposite view.

Next: 2. Religion and other candidate traits
← Prev Page
Page1You are reading page2Page3Page4Page5Page6
Next Page →