A year before the next president takes office, voters are skeptical that any of the leading 2016 candidates would make a good president. Moreover, of nine candidates included in the survey, far more voters say each would make a “terrible” than “great” president.

The latest national survey by the Pew Research Center, conducted Jan. 7-14 among 2,009 adults, including 1,525 registered voters, finds that 35% of voters say that Hillary Clinton would make either a good or great president, with 11% saying she would be great. More voters (44%) say Clinton would be either poor or terrible in the White House; 28% say she would be terrible. About one-in-five (18%) think Clinton would make an average president. 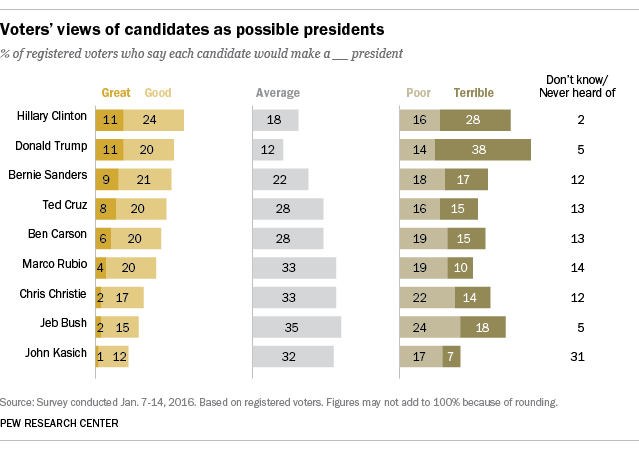 More Republican voters also say Cruz would be a good or great president (53%) than either a poor or terrible president (13%), or an average one (25%).

The possibility of Rubio and Carson becoming president also is viewed more positively than negatively by Republican voters. More than four-in-ten (44%) say Rubio would make either a good or great president, while 17% say he would be poor or terrible and 30% think he would make an average president. The prospect of Carson becoming president elicits similar reactions among GOP voters (44% good or great; 18% poor or terrible; 30% average). 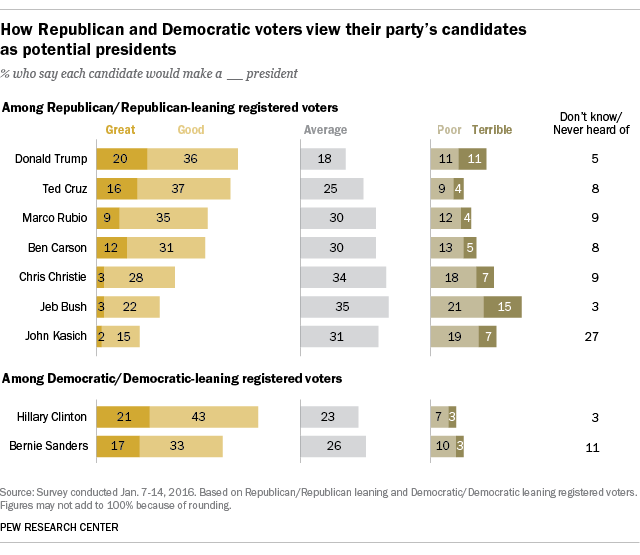 2016 candidates: the view from the other side 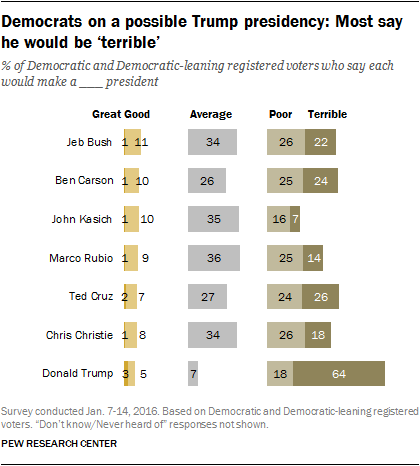 Democrats react negatively to the prospect of all of the GOP candidates in the White House. But their views of a potential Trump presidency are particularly intense.

Fully 64% of Democratic and Democratic-leaning registered voters say Trump would make a terrible president. That is by far the highest percentage among the seven GOP candidates in the survey.

Democrats have more negative than positive reactions to the other GOP candidates possibly becoming president, but no more than about a quarter of Democrats say any of these candidates would make terrible presidents. 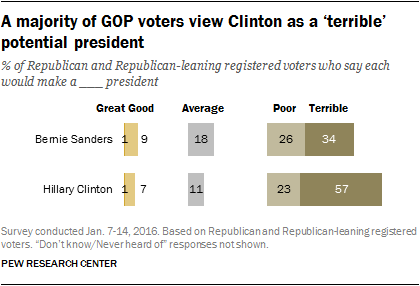 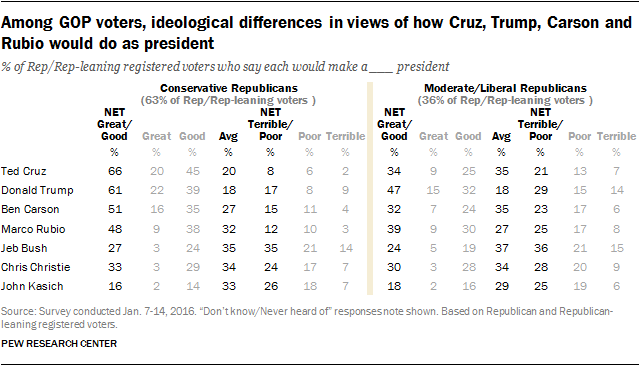 The prospect of Donald Trump in the White House is viewed more positively by GOP voters who have not completed college than Republican college graduates – the only Republican candidate tested for whom this is the case. 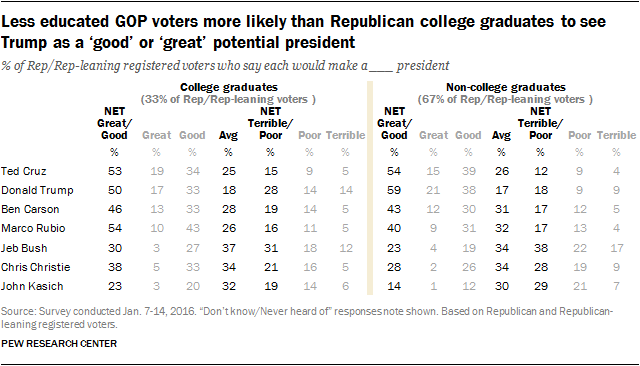 The prospect of Hillary Clinton becoming president is viewed positively by majorities of both liberal Democratic voters and conservative and moderate Democrats. About seven-in-ten liberal Democrats (72%) say that Clinton would make a great or good president, while 59% of conservative and moderate Democrats hold this view. (For detailed tables on how each Democratic candidate is viewed by Democratic voters, see here.)

How Democrats’ views of Clinton as a possible president have changed 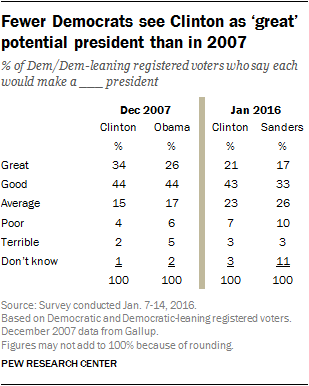 Fewer Democratic voters have a positive reaction to Clinton possibly becoming president today than did so in December 2007, before the first caucuses and primaries of the 2008 campaign. Currently, 21% of Democrats say Clinton would make a great president; 34% expressed this view eight years ago. About the same share of Democrats see Clinton as a good potential president as did so then (43% now, 44% then), while somewhat more see her as average (23% now, 15% then).

Ahead of the first contests in 2008, far more Democrats saw Barack Obama as a good or great potential president (70%) than say that about Sanders today (51%).

Overlap among partisans in views of the candidates as possible presidents

As both the Republican and Democratic candidates vie for primary and caucus votes, many voters in each party say that more than one candidate would make a great or a good president. 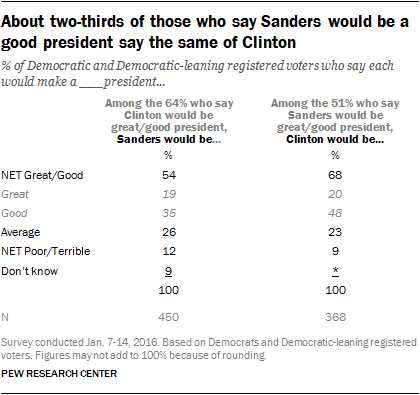 Among Democratic voters overall, 64% say Clinton would make either a good or great president, while 51% say this of Sanders. There is substantial overlap between these two groups. On balance, however, Clinton performs better among those who view a Sanders presidency positively than Sanders does among those who say Clinton would be a good or great president.

Among those who view a potential Clinton presidency positively, 54% say Sanders would also make a good or great president; 26% say he would be an average president, while just 12% say he would either be a poor or terrible president.

Conversely, about two-thirds (68%) of those who say Sanders would be a good or great president also express a positive view of Clinton becoming president. Nearly a quarter (23%) say Clinton would be average, while 9% say she would be poor or terrible. 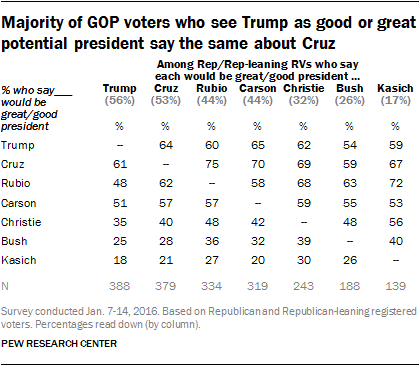 Among Republican voters who say Trump would be a great or good president, most (61%) say the same about Cruz. Roughly half say Rubio (48%) and Carson (51%) also would make good or great presidents. Those who react positively to a potential Trump presidency are less likely to say Christie (35%), Bush (25%) and Kasich (18%) would make good or great presidents.

With primaries ahead, Republicans more engaged by 2016 campaign 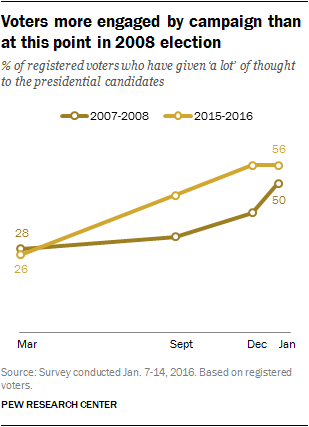 As has been the case throughout the 2016 campaign, voters remain highly engaged by the presidential contest. A majority of registered voters (56%) say they have given “a lot” of thought to the candidates running for president.

At this point in the 2008 campaign, following the Iowa caucuses and New Hampshire primary, fewer voters (50%) said they had thought a lot about the presidential candidates.

Interest in the campaign is unchanged since December, but has increased steadily since last March, when just 26% said they were giving a lot of thought to the presidential candidates.

In January 2008, nearly identical shares of Democratic (52%) and Republican voters (51%) said they were giving a lot of thought to the candidates.