The analysis in this report is based on telephone interviews conducted January 7-14, 2016 among a national sample of 2,009 adults, 18 years of age or older, living in all 50 U.S. states and the District of Columbia (504 respondents were interviewed on a landline telephone, and 1,505 were interviewed on a cell phone, including 867 who had no landline telephone). The survey was conducted under the direction of Abt SRBI. A combination of landline and cell phone random digit dial samples were used; both samples were provided by Survey Sampling International. Interviews were conducted in English and Spanish. Respondents in the landline sample were selected by randomly asking for the youngest adult male or female who is now at home. Interviews in the cell sample were conducted with the person who answered the phone, if that person was an adult 18 years of age or older. For detailed information about our survey methodology, see https://www.pewresearch.org/methodology/u-s-survey-research/ 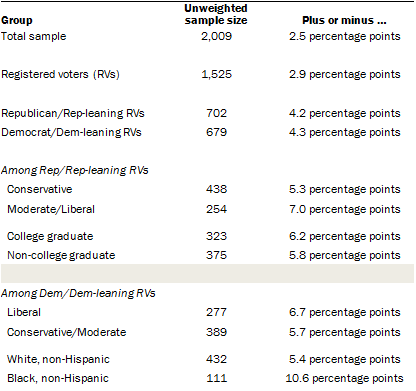 Clinton, Trump Supporters Have Starkly Different Views of a Changing Nation
Campaign Exposes Fissures Over Issues, Values and How Life Has Changed in the U.S.
2016 Campaign: Strong Interest, Widespread Dissatisfaction
Voters’ Perceptions of the Candidates: Traits, Ideology and Impact on Issues
Public’s Mood Turns Grim; Trump Trails Biden on Most Personal Traits, Major Issues
Defining generations: Where Millennials end and Generation Z begins
Growing Share of Americans Say They Plan To Get a COVID-19 Vaccine – or Already Have
Quiz: Are you a Core Conservative? A Solid Liberal? Or somewhere in between?
Most Americans Support Tough Stance Toward China on Human Rights, Economic Issues
In their own words: What Americans think about China