About half of Americans say the growing number of “people who are not religious” is bad for American society. But a similar share say either that this trend is good or that it does not make much difference, according to a new survey by the Pew Research Center.

In recent years, Pew Research surveys have found evidence of a gradual decline in religious commitment in the U.S. public as a whole. For example, there has been a modest uptick over the past decade in the share of U.S. adults who say they seldom or never attend religious services. The number of Americans who do not identify with any religion also has grown in recent years; indeed, about one-fifth of the public overall – and a third of adults under age 30 – are religiously unaffiliated as of 2012. Fully a third of U.S. adults say they do not consider themselves a “religious person.” And two-thirds of Americans – affiliated and unaffiliated alike – say religion is losing its influence in Americans’ lives.

The new, nationwide survey by the Pew Research Center’s Forum on Religion & Public Life asked Americans whether having “more people who are not religious” is a good thing, a bad thing, or doesn’t matter for American society. Many more say it is bad than good (48% versus 11%). But about four-in-ten (39%) say it does not make much difference. Even among adults who do not identify with any religion, only about a quarter (24%) say the trend is good, while nearly as many say it is bad (19%); a majority (55%) of the unaffiliated say it does not make much difference for society. 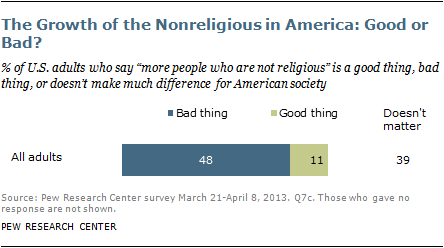 These findings are from a nationwide survey of 4,006 adults conducted March 21-April 8, 2013. The margin of error is plus or minus 2.1 percentage points.

Members of all the major U.S. religious groups with large enough samples for analysis are more inclined to see this development as a bad than good thing for society. White evangelical Protestants are especially likely to say the growing number of people who are not religious is a bad thing, with nearly eight-in-ten (78%) holding this view. Majorities of black Protestants (64%) and white non-Hispanic Catholics (56%) say the same. Fewer than one-in-ten in each of the three groups says this trend is a good thing for society.

The balance of opinion also is lopsided among white mainline Protestants, among whom 45% say the increase in those who are not religious is a bad thing, just 6% say it is a good thing, and 46% say it doesn’t make much difference for society. 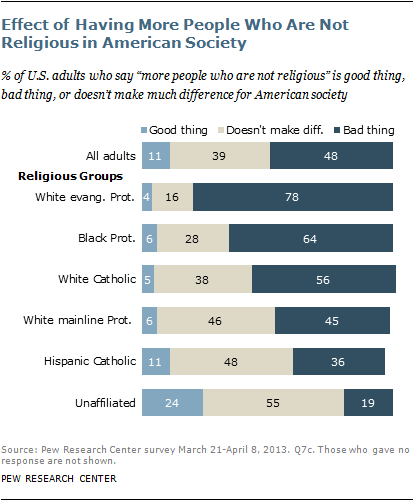 While those with no religious affiliation are less negative than other U.S. adults in their assessment of this trend, only about a quarter of the religiously unaffiliated (24%) say it is a good thing that more people are not religious. About as many (19%) say it is a bad thing, and a 55% majority says it does not make much difference for society. 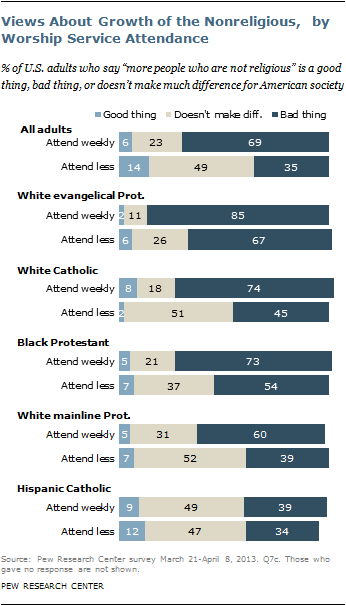 Men and women hold similar views on this question. At least four-in-ten of both groups say it is a bad thing that more people are not religious. 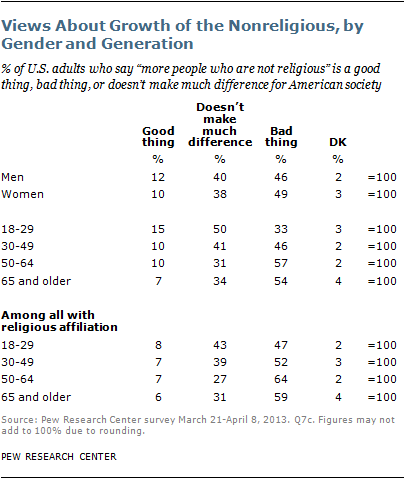 This report is based on telephone interviews conducted March 21-April 8, 2013, among a national sample of 4,006 adults, 18 years of age or older, living in all 50 U.S. states and the District of Columbia (2,002 respondents were interviewed on a landline telephone, and 2,004 were interviewed on a cell phone). Interviews were completed in English and Spanish by live, professionally trained interviewing staff under the direction of Princeton Survey Research Associates International.

A combination of landline and cell random digit dial (RDD) samples were used to reach a representative sample of all adults in the United States who have access to either a landline or cell phone. Both samples were disproportionately stratified to increase the incidence of African-American and Hispanic respondents. Within each stratum, phone numbers were drawn with equal probabilities. The landline samples were list-assisted and drawn from active blocks containing three or more residential listings, while the cell samples were not list-assisted but were drawn through a systematic sampling from dedicated wireless 100-blocks and shared service 100-blocks with no directory-listed landline numbers. Both the landline and cell RDD samples were disproportionately stratified by county based on estimated incidences of African-American and Hispanic respondents.

Several stages of statistical adjustment or weighting are used to account for the complex nature of the sample design. The weights account for numerous factors, including (1) the different, disproportionate probabilities of selection in each strata, (2) the overlap of the landline and cell RDD sample frames, and (3) differential non-response associated with sample demographics. 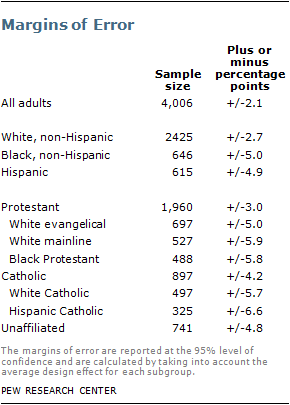