The Pew Research Center’s 2011 survey of Muslim Americans provides a comprehensive portrait of this religious group, including its religious beliefs and practices as well as social and political attitudes. This nationally representative survey of U.S. Muslims was conducted in English, Arabic, Farsi and Urdu.

The survey found that Muslims in the U.S. are racially diverse, with 22% describing themselves as either single-race Asian (21%) or multiple-race Asian. The tables below show findings for (multiple or any race) Asian-American Muslims (N=324) and for U.S. Muslims overall (N=1,033) on questions that are similar or identical to those asked on the 2012 Asian-American Survey. There is some overlap between these categories because U.S. Muslims includes the 22% who identify as Asian race.48

The question wording for race and religious affiliation differed somewhat from that in the 2012 Asian-American Survey.49 For more details on the findings and the survey methodology, see Pew Research Center. 2011. “Muslim Americans: No Signs of Growth in Alienation or Support for Extremism.” Washington, D.C.: August. 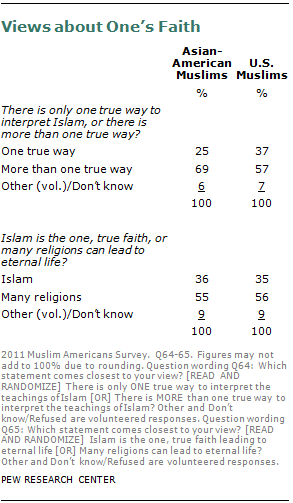 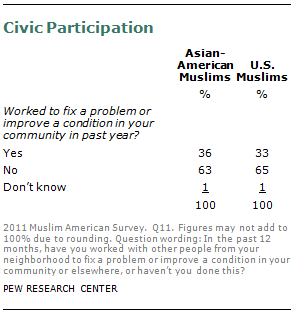 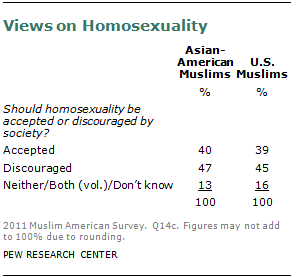 49 In the Muslim American survey, the question wording for race was: “Which of the following describes your race? You can select as many as apply. White, black or African American, Asian or Asian American, or some other race.” Question wording for religious affiliation was: “What is your religious preference? Christian, Jewish, Muslim, Hindu, Buddhist, or something else.” (return to text)