More than eight-in-ten Asian Americans celebrate Christmas, and nearly nine-in-ten celebrate Thanksgiving. But many also maintain distinctive religious and cultural practices, such as celebrating the Lunar New Year and keeping a shrine or temple in their home. By contrast, meditation—a practice commonly associated with some, but not all, types of Buddhism—turns out to be a relatively infrequent practice among Asian-American Buddhists. A majority say they seldom or never meditate, while just one-in-seven engages in meditation on a daily basis. 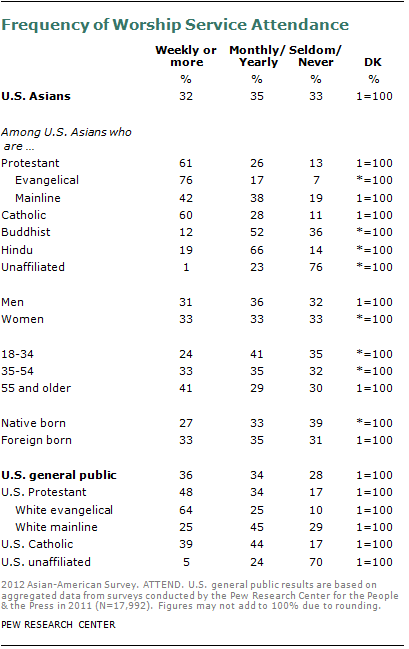 There are no significant differences between Asian-American men and women in their reported rates of worship service attendance. But older Asian Americans (ages 55 and older) are more likely than their younger counterparts to attend services at least once a week. And foreign-born Asian Americans, as a whole, are a bit more likely than U.S.-born Asians to attend services at least occasionally.

Nearly four-in-ten Asian Americans (37%) say they sometimes attend religious services at more than one place, aside from when they are traveling or going to special events such as weddings and funerals. About a quarter of U.S. Asians (26%) say they always attend at the same place. Asian Americans are about as likely as the general public overall to attend services at multiple locations.

Asian-American Protestants—both evangelical and mainline—are similar to their respective counterparts in the general public with regard to worship attendance at multiple locations. But Asian-American Catholics are somewhat more likely to attend services at multiple locations (50%) than are Catholics in the general public (40%).

Attendance at multiple locations, however, can have two very different meanings. It can mean that a respondent attends services of more than one faith. Or it can mean that a respondent attends services at more than one house of worship, though always of the same faith—such as at two Catholic parishes or at several different Hindu temples. The survey asked a follow-up question to determine whether respondents who worship at multiple places always go to services of the same faith. About one-in-five Asian Americans (19%) say they at least occasionally go to worship services of a different faith, not counting when they are traveling or attending special events such as funerals and weddings. More than twice as many (44%) say they attend services of only their own faith.39

The survey finds few differences across religious groups on this question. Among Asian Americans, Hindus are the most likely to say they attend worship services of a faith other than their own (30%). 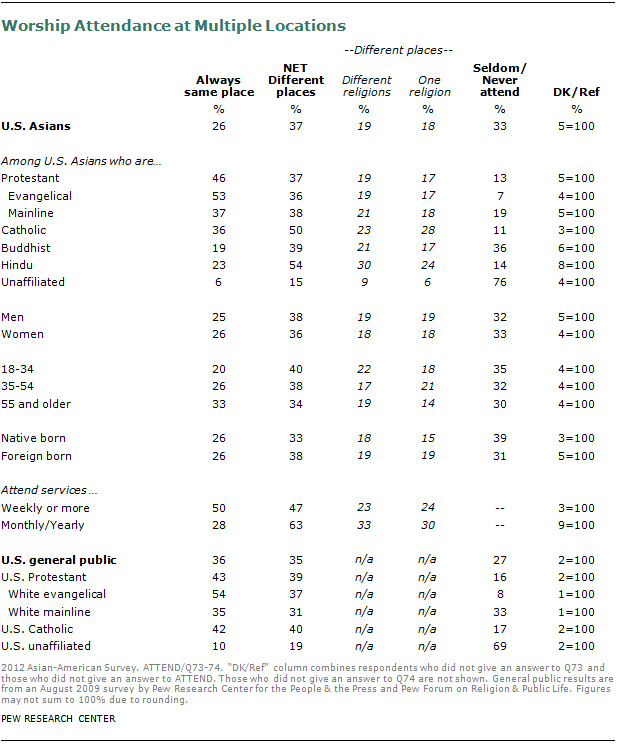 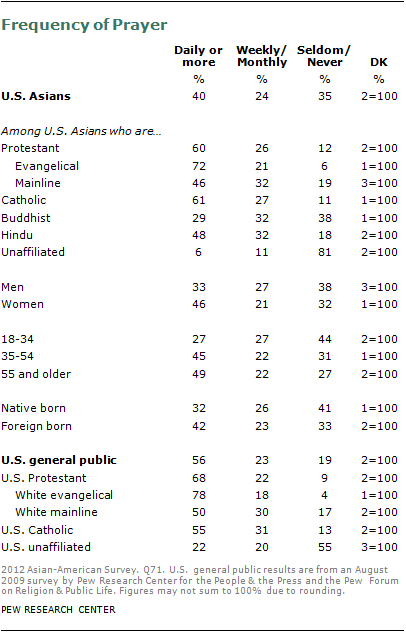 A third of Asian Americans (34%) say they meditate as a religious or spiritual exercise at least once a week, while an additional 8% meditate a few times a month. More than half (56%) say they seldom or never meditate. 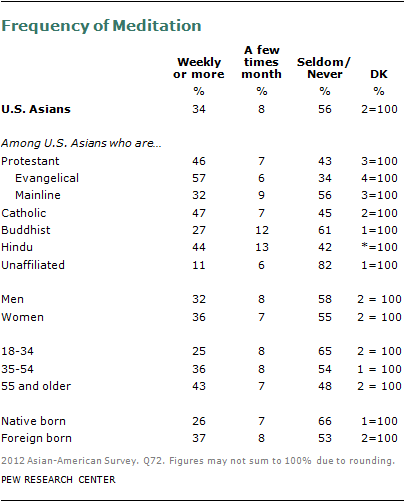 Interestingly, meditation—a practice commonly associated with some (though not all) types of Buddhism—is relatively uncommon among Asian-American Buddhists. A majority (61%) say they seldom or never meditate, while about three-in-ten (27%) engage in meditation at least weekly, a lower rate than among Asian-American Protestants (46%), Catholics (47%) and Hindus (44%).

A similar, though not directly comparable, question on the Pew Forum’s 2007 “U.S. Religious Landscape Survey” found that 39% of U.S. adults as a whole say they meditate at least once a week. However, the 2007 survey did not specify meditation as a “religious or spiritual exercise,” and it provided five rather than seven response options.40

Shrines and Temples in the Home

About three-in-ten Asian Americans (29%) maintain a shrine or temple in their home for prayer. This practice is most common among Hindus (78%). 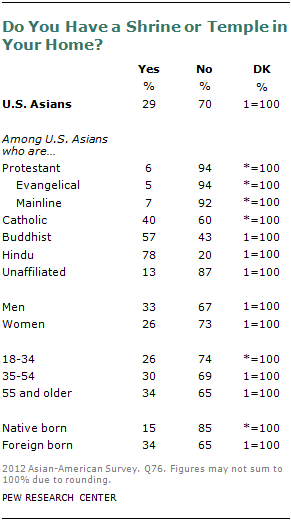 A majority of Asian-American Buddhists (57%) also say they have a shrine in their home, as do four-in-ten Asian-American Catholics. Maintaining a shrine or temple in the home is far less common among Asian-American evangelicals (5%) and mainline Protestants (7%), as well as among those who are unaffiliated with any particular religion (13%).

Asian immigrants are more likely than U.S.-born Asians to have a shrine or temple at home.

Comparisons with the general public are not available on this question.

About three-in-ten Asian Americans overall (29%) say they fast during holy times. A majority of Asian-American Catholics (56%) say they fast during holy times, as do 41% of Hindus. Fasting is less common among other religious groups. Among Asian-American Buddhists, evangelicals, mainline Protestants and the religiously unaffiliated, roughly three-quarters or more say fasting is not a part of the way they practice their religion. 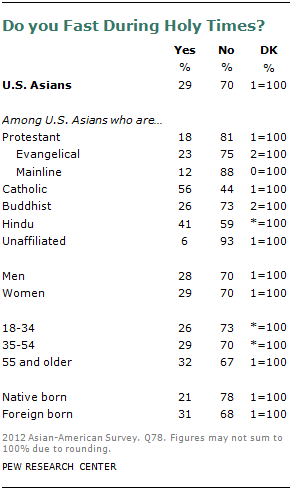 Comparisons with the general public are not available on this question. 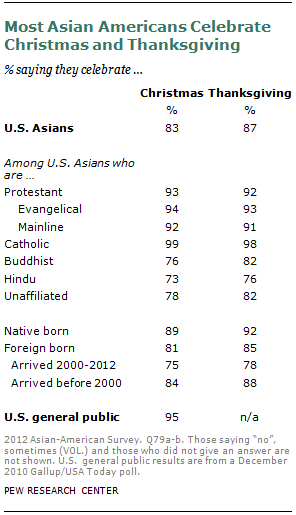 Among all U.S. Asians, nearly nine-in-ten (87%) say they celebrate Thanksgiving. This includes roughly eight-in-ten Buddhists (82%) and about three-quarters of Hindus (76%).

Holiday celebrations can, of course, entail religious, secular or a mix of both practices; the survey questions did not ask about the kinds of practices that respondents have in mind with regard to these celebrations.

Many Asian countries—including China, Korea, Japan and Vietnam—use a lunar calendar in addition to the solar calendar commonly used in the United States.

Among religious groups from these four countries of origin, roughly eight-in-ten Buddhists (81%) and Catholics (77%) say they celebrate the Lunar New Year. About half of the Protestants in these country-of-origin groups—including 49% of evangelicals—also celebrate the start of the lunar year. 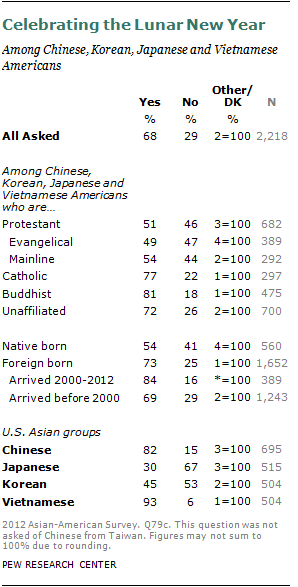 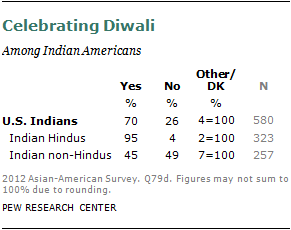 40 In the Asian-Americans survey, response options were “several times a day, once a day, a few times a week, once a week, a few times a month, seldom, or never.” Response options for the 2007 “U.S. Religious Landscape Survey” were “at least once a week, once or twice a month, several times a year, seldom, or never.” (return to text)

41 Due to a programming error, this question was not asked of Chinese Americans from Taiwan. (return to text)