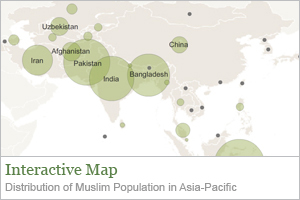 Muslims living in the Asia-Pacific region, which includes 61 countries and territories, constitute 62% of all Muslims worldwide. 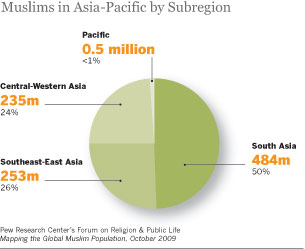 About half of the Muslim population within Asia lives in South Asia (50%) and the remainder are somewhat equally divided between Southeast-East Asia (26%) and Central-Western Asia (24%). Very few Muslims, however, live in the Pacific (<1%).1

Other Asian countries with more than 20 million Muslims include Afghanistan (28 million), Uzbekistan (26 million) and China (22 million). There are Muslims in every province of China, but the highest concentrations are in the west, primarily in Xinjiang, Ningxia and Gansu, with other significant populations in Henan, Qinghai, Yunnan, Hebei and Shandong. Xinjiang is the only Muslim-majority province of China, with Muslims accounting for approximately 53% of the total population.

Countries in Asia-Pacific with the Largest Number of Muslims

Countries where the number of Muslims is too small to be reliably estimated not shown.