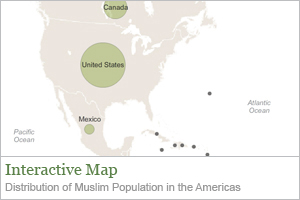 Suriname is the country in the region with the largest Muslim population percentage, at about 16%. Guyana is next, at about 7% Muslim, and Trinidad and Tobago is about 6% Muslim. Argentina, with about 800,000 Muslims, is home to the largest number of Muslims in South America. Less than 1% of Mexico’s population is Muslim.

Countries in the Americas with the Largest Number of Muslims

Map: Distribution of Muslim Population in the Americas

* Indicates the use of a source with a small enough sample size to make these estimates somewhat less reliable. Due to this greater margin of error, percentages are rounded to the nearest integer rather than to the first decimal place and are therefore more approximate (~).

Countries where the number of Muslims is too small to be reliably estimated not shown.

1 There has been considerable debate over the exact number of Muslims in the United States. The 2.5 million figure is a projection for 2009 based on the Pew Research Center’s 2007 survey “Muslim Americans: Middle Class and Mostly Mainstream” and available Census Bureau data, adjusted for U.S. population growth. For a discussion of the larger debate, see http://pewresearch.org/pubs/532/questions-muslim-survey.