The analysis in this report is based on telephone interviews conducted January 9-14, 2019 among a national sample of 1,505 adults, 18 years of age or older, living in all 50 U.S. states and the District of Columbia (388 respondents were interviewed on a landline telephone, and 1,117 were interviewed on a cell phone, including 724 who had no landline telephone). The survey was conducted by interviewers under the direction of SSRS. A combination of landline and cell phone random digit dial samples were used; both samples were provided by Marketing Systems Group. Interviews were conducted in English and Spanish. Respondents in the landline sample were selected by randomly asking for the youngest adult male or female who is now at home. Interviews in the cell sample were conducted with the person who answered the phone, if that person was an adult 18 years of age or older. Within the cell phone RDD frame, two strata were defined: numbers flagged as a pre-paid phone and numbers not flagged as such. Numbers servicing a pre-paid phone were sampled at a somewhat higher rate than other numbers. The weighting procedure corrected for the different sampling rates. For detailed information about our survey methodology, see https://www.pewresearch.org/methodology/u-s-survey-research/.

The combined landline and cell phone sample is weighted using an iterative technique that matches gender, age, education, race, Hispanic origin and nativity and region to parameters from the 2016 Census Bureau’s American Community Survey one-year estimates and population density to parameters from the Decennial Census. The sample also is weighted to match current patterns of telephone status (landline only, cell phone only, or both landline and cell phone), based on extrapolations from the 2016 National Health Interview Survey. The weighting procedure also accounts for the fact that respondents with both landline and cell phones have a greater probability of being included in the combined sample and adjusts for household size among respondents with a landline phone. To account for the oversample of pre-paid cell phone sample, an adjustment was made to the data before the sample was balanced to population parameters. The sample was adjusted so that the proportion of prepaid numbers in the entire sample matched the proportion of prepaid numbers in the base sample. The margins of error reported and statistical tests of significance are adjusted to account for the survey’s design effect, a measure of how much efficiency is lost from the weighting procedures. 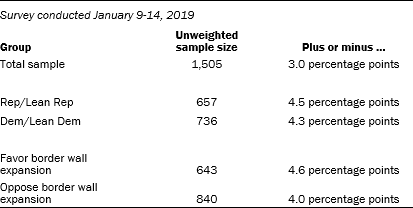 Federal GovernmentNational SecurityUnauthorized ImmigrationMexico
Are you in the American middle class? Find out with our income calculator
Defining generations: Where Millennials end and Generation Z begins
Americans Fault China for Its Role in the Spread of COVID-19
Americans Who Mainly Get Their News on Social Media Are Less Engaged, Less Knowledgeable
25% in U.S. see at least some truth in conspiracy theory that COVID-19 was planned