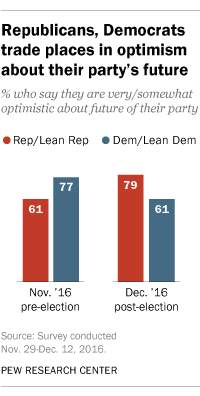 In the wake of the election, Republicans are feeling more optimistic about their party’s future. By contrast, Democrats’ optimism about the Democratic Party’s future has declined. And Democrats are more likely than Republicans to say their party has done too little to address the concerns of a number of groups, including women, minorities and residents of rural areas.

Today, 79% of Republicans say they are very or somewhat optimistic about the future of the Republican Party. In early November, on the eve of the election, 61% of Republicans expressed optimism about their party’s future.

The latest national survey by Pew Research Center, conducted Nov. 29-Dec. 12 among 4,183 adults on Pew Research Center’s nationally representative American Trends Panel also finds that Republicans and Democrats have very different views about their party’s outreach to various groups in society, including women, minorities, people who live in rural areas and those with different levels of educational attainment. 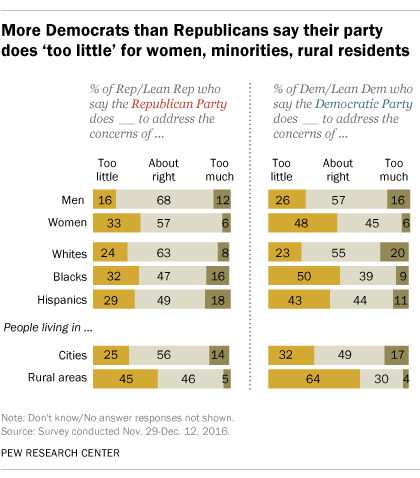 Democrats and Democratic leaners, by contrast, are about as likely to say their party does too little to address women’s concerns (48%) as about the right amount (45%).

A little over a month after the hard-fought presidential election, a substantial majority of Democrats (90%) still say they feel disappointed (64%) or angry (26%) about Trump’s win. 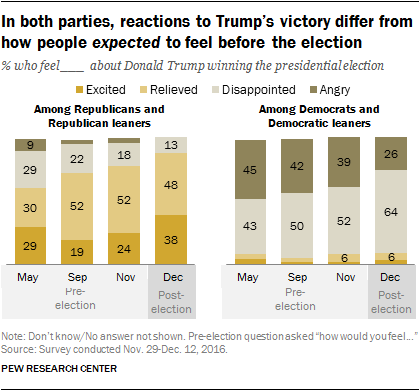 Republicans’ reactions to Trump’s victory also are somewhat different from the reactions they expected to have prior to the election.

With Trump set to take the oath of office in a month, about three-quarters of the public (76%) thinks that the new president should work closely with the opposing party in Congress, a view shared by 62% of Republicans and 88% of Democrats. 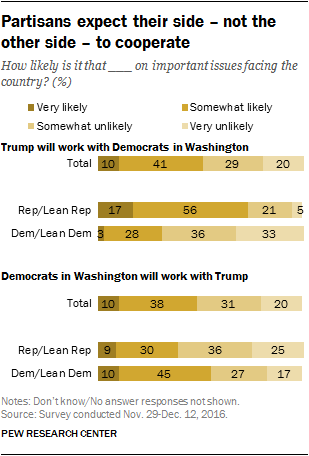 Democrats, in particular, are skeptical that Trump will cooperate with their party: Just 31% of Democrats (compared with 73% of Republicans) say Trump is likely to work with Democrats in Washington.

As other recent Pew Research Center surveys have found, Trump’s image has improved since his election victory, though it remains negative on balance. Asked to rate Trump on a 0-100 “thermometer,” 36% give Trump a very or somewhat “warm” rating (51-100), while 14% give him a neutral rating (50) and nearly half (48%) rate him “coldly” (0-49). In two prior surveys, in October and April, majorities had rated Trump coldly.

Trump’s post-election thermometer ratings are not significantly different from Hillary Clinton’s: 36% rate Clinton warmly, 14% give her a neutral rating and 48% a cold rating. 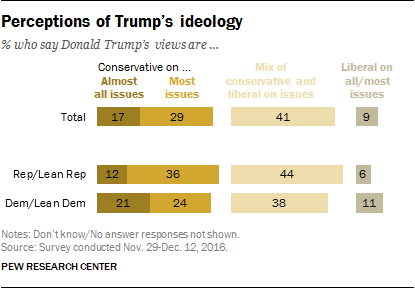 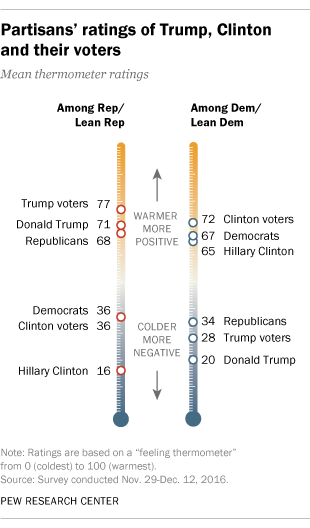 Most non-voters also have no regrets. Among citizens who say they did not cast a ballot in the presidential election, 55% say they do not wish they had voted. Some of the top reasons given for not voting are that they did not like the candidates (26% selected this as a reason they did not vote), they felt their vote would not matter (25%), or they were not registered or eligible to vote (22%).

Next: 1. Partisans’ views of their parties, impact of Trump’s election on the GOP
← Prev Page
You are reading page1Page2Page3Page4Page5Page6
Next Page →

In Election’s Wake, Partisans Assess the State of Their Parties
Other important findings
1. Partisans’ views of their parties, impact of Trump’s election on the GOP 2. Trump, Congress and prospects for bipartisanship 3. Views of Trump, other political figures and the parties 4. Retrospective views of the campaign Methodology