After an extraordinarily negative campaign, with low personal marks for both Trump and Clinton throughout, Americans’ views of the two major candidates have improved slightly since the election. 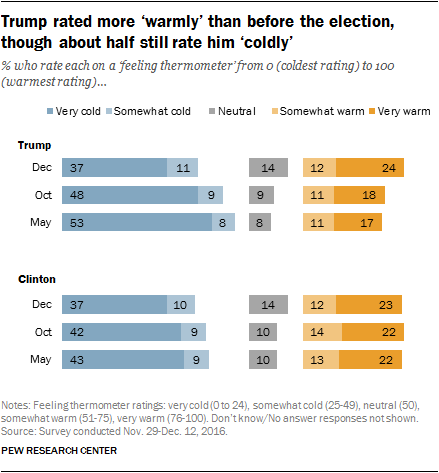 Shortly before securing the nomination, about six-in-ten Americans registered “cold” feelings toward Donald Trump on a 0-100 degree “feeling thermometer” – where 0 is the coldest, most negative rating and 100 represents the warmest, most positive rating. At that time more than half (53%) gave him a very cold rating (a rating of less than 25 degrees), while an additional 8% gave him a “somewhat cold” rating (25 to 49 degrees). Just 28% gave him a warm rating (above 50 degrees).

Views of Trump were little changed as of early October. But following his victory, Americans’ ratings of Trump have thawed somewhat, though more continue to rate him coolly than warmly. Today, about half (48%) give Trump a cold rating, while 36% rate him warmly.

Throughout the campaign, Clinton was viewed somewhat more warmly than Trump, and today slightly fewer give her cold ratings than did so before the election. As a result, Trump’s current ratings are nearly identical to Clinton’s. 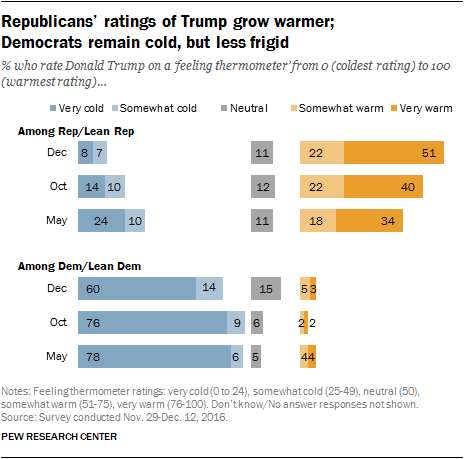 Among Republicans and Republican leaners, views of Trump improved from the primaries, through the general election campaign and again following his win. Today, nearly three-quarters of Republicans (73%), rate him warmly, including half (51%) who give him a very warm rating (76-100). The share of Republicans rating him coolly is now just 15%; in May, about twice as many Republicans (34%) gave Trump a cold rating.

In particular, Trump’s rating among Republicans who supported another GOP candidate during the primaries has warmed considerably: Just 30% rated him warmly in May, and 56% did so in October, while 69% do so today. Among Trump’s primary backers nearly all (96%) rate him warmly today, little different than the share who did so throughout the year.

Three-quarters of Democrats and Democratic leaners (75%) now rate Trump coldly, including fully 60% who rate him very coldly. Still, fewer now give Trump a cold rating than did so during the campaign.

Americans have mixed views of the vice president-elect. As Mike Pence prepares to enter office, 30% of Americans rate him warmly, while a roughly comparable share (33%) feels “cold” toward him; 15% rate Pence neutrally and an additional 22% say they can’t give him a rating. 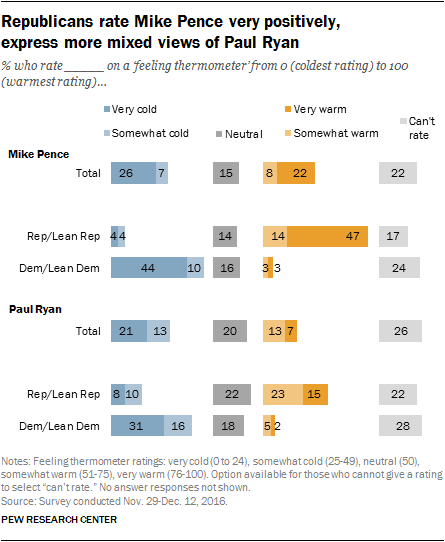 Republicans, in particular, view Pence warmly: 61% give him a warm rating (including 47% who rate Pence very warmly). Democrats’ ratings of Pence are generally cold: 54% view him coldly, while 16% give him a neutral rating and just 6% rate him warmly (24% do not offer a rating). 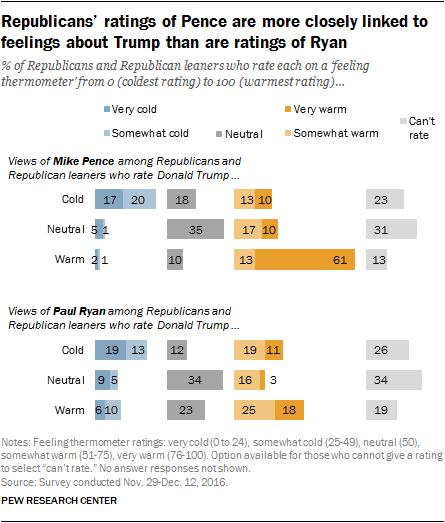 Speaker of the House Paul Ryan’s ratings are, on balance, less warm than Pence’s. About a third of the public (34%) feels coldly toward him, while just 20% feel warmly. Though the two GOP figures are both viewed coldly by most Democrats who rate them, Republicans feel far more warmly toward Pence than Ryan; just 38% of Republicans give Ryan a warm rating.

But Republicans’ views of Ryan are much less strongly related to their feelings about Trump. Republicans who give Trump a cold rating are about equally likely to give Ryan a cold (32%) as a warm (30%) rating.

Public continues to have mixed views of Trump’s ideological positions

As was the case during the campaign, Americans are fairly divided in their assessments of Trump’s ideological views: While 46% characterize his views as conservative on all (17%) or most (29%) issues, 41% say Trump’s views are a mix of liberal and conservative positions. Just 9% say he has all or mostly liberal views on issues. 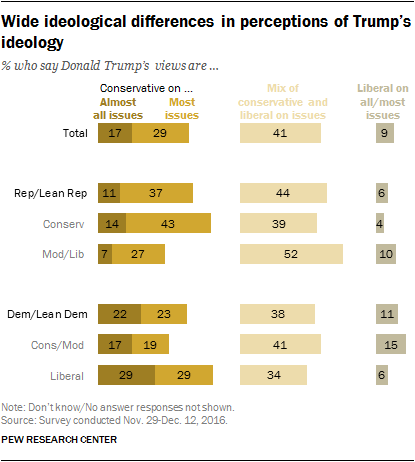 There are only modest partisan differences in these perceptions, with Democrats and Democratic leaners somewhat more likely to say Trump’s views are almost all conservative (22% vs. 11% of Republicans and Republican-leaning independents).

Among Democrats, the opposite pattern is evident: 58% of liberal Democrats and Democratic-leaning independents say Trump’s views on issues are all (29%) or mostly (29%) conservative. Among moderate and conservative Democrats, a far smaller share (36%) say this. 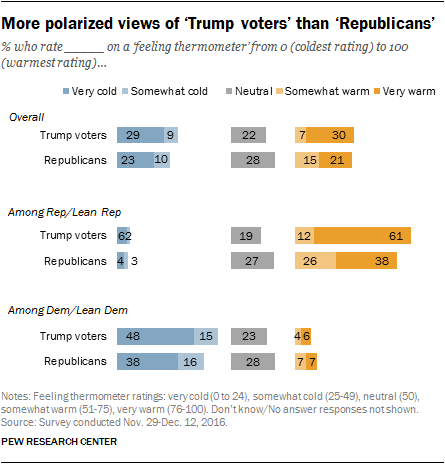 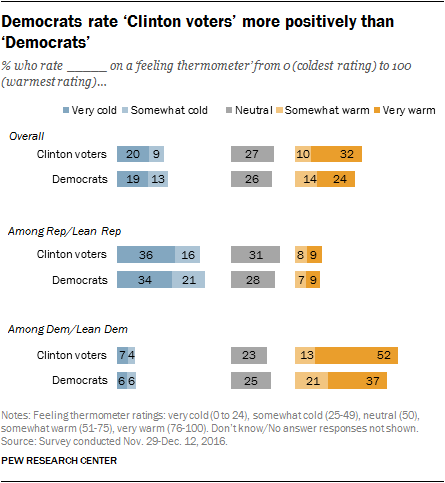 The public is slightly warmer in their assessments of Clinton voters compared to Democrats in general. Nearly one third (32%) give Clinton voters a very warm rating, but only about a quarter (24%) give Democrats a similarly high rating.

Republicans give Clinton voters and Democrats roughly similar ratings. There are no significant differences between Republicans’ ratings of the two groups.

Next: 4. Retrospective views of the campaign
← Prev Page
Page1Page2Page3You are reading page4Page5Page6
Next Page →

In Election’s Wake, Partisans Assess the State of Their Parties 1. Partisans’ views of their parties, impact of Trump’s election on the GOP 2. Trump, Congress and prospects for bipartisanship
3. Views of Trump, other political figures and the parties
Mike Pence viewed warmly by RepublicansPublic continues to have mixed views of Trump’s ideological positionsViews of partisans, candidates’ supporters
4. Retrospective views of the campaign Methodology