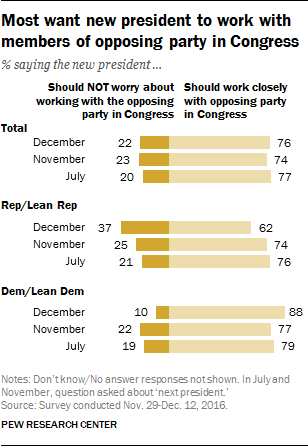 A large majority of the public wants the new president to work closely with members of the opposing party in Congress (76%), while just 22% say they want the new president to advance their own programs and not worry about working with the opposing party in Congress. Overall views on this question are about the same as they were in November and July, when the question was asked about the “next” president. But views among partisans have shifted somewhat in the wake of the presidential election. (For more on question wording, see the note at the end of this section.)

The share of Republicans who say the new president should not worry about working with the other party has increased by 12 percentage points since this question was asked in a survey in the days leading up to the election. Today 37% of Republicans and Republican-leaning independents say this, compared with 25% who said this just before the election. Nonetheless, most Republicans (62%) still favor cooperation with the opposing party.

Democrats and Democratic leaners are now even more likely to say the new president should work closely with the opposing party in Congress than they were prior to the election. In the current survey, 88% say this, up from 77% in early November.

While the public wants the new president to work with members of the opposing party in Congress, they are uncertain that this is likely to happen. Overall, 50% say it is either very (10%) or somewhat (41%) likely that Donald Trump will work with Democrats in Washington on important issues, while about as many (49%) say they think this is very (20%) or somewhat (29%) unlikely. 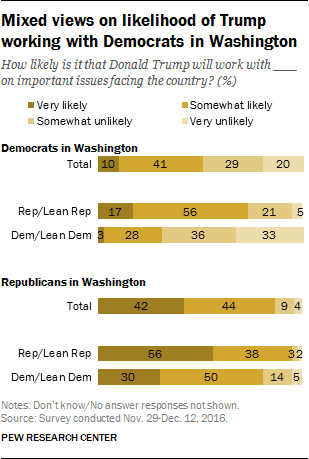 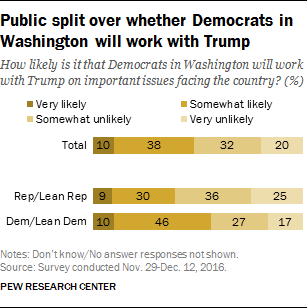 Among Republicans, differing views of bipartisan cooperation depending how question is asked 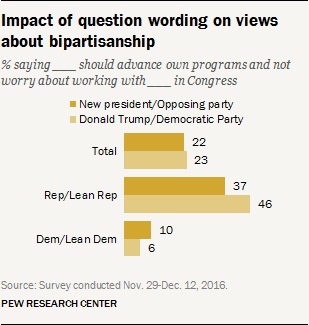 A random half of respondents to the current survey were asked whether the “next president” should work with the “opposing party in Congress,” a question that had been asked in surveys throughout the campaign.

The other half of respondents received a version of the same question that explicitly mentioned “Donald Trump” working with the “Democratic Party in Congress.” The overall results of the two questions are similar, with no significant differences in the shares who want to see “the next president” or “Trump” work closely with members of “the opposing party” or “the Democratic Party” and the shares who want the next president/Trump to advance their own programs and not worry about the opposing party/Democrats.

Next: 3. Views of Trump, other political figures and the parties
← Prev Page
Page1Page2You are reading page3Page4Page5Page6
Next Page →

In Election’s Wake, Partisans Assess the State of Their Parties 1. Partisans’ views of their parties, impact of Trump’s election on the GOP
2. Trump, Congress and prospects for bipartisanship
Among Republicans, differing views of bipartisan cooperation depending how question is asked
3. Views of Trump, other political figures and the parties 4. Retrospective views of the campaign Methodology