Today, 43% of Americans express a positive emotion about Donald Trump winning the election: 18% say they feel excited, while 25% say they are relieved. By comparison, in the days before the election, only 38% expected to feel one of these positive emotions, including just 12% who said they would be excited. 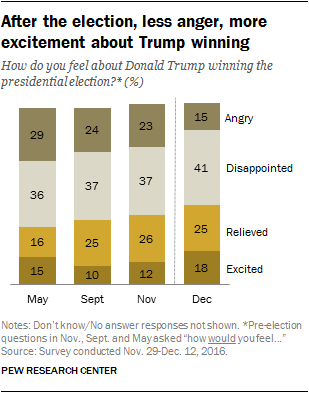 Still, a narrow majority of Americans (55%) have a negative reaction to Trump’s victory. Most of those unhappy with Trump’s win express disappointment (41% of the public), while 15% of Americans say they are angry about Trump’s election. On the eve of the election, a somewhat larger share of the public (23%) anticipated they would be angry if Trump won.

Fully 86% of Republicans and Republican-leaning independents now express either excitement (38%) or relief (48%) about Trump’s win, while just 13% say they are disappointed. During the course of the campaign, smaller majorities of Republicans said they would feel one of these positive emotions if Trump won, while closer to a quarter (22% in November, 25% in August) of Republicans said they would feel disappointed or angry. In particular, GOP excitement over Trump’s win is now much greater than expected (38% say they are excited, up from 24% on the eve of the election). 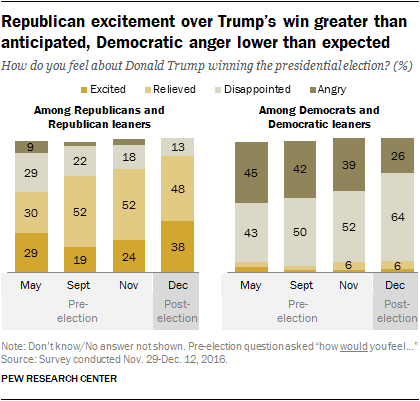 Though Democrats and Democratic-leaning independents remain overwhelmingly unhappy about Trump’s win, fewer express anger about it than did so when asked how they would feel if he won before the election. In September and November, about four-in-ten (42% and 39%, respectively) Democrats said they would be angry if Trump won. Today, about a quarter of Democrats (26%) say they are angry about his victory, while a greater share now say they are disappointed.

Among Republicans, excitement about Trump’s win is more pronounced among older people and those who backed Trump during the primaries.

About half of Republicans and Republican-leaning independents over 65 (51%) say they feel excited about Trump’s election, while just 23% of Republicans under 30 say the same.

Young Republicans are about as likely to say they are disappointed or angry (24%) about Trump’s win as they are to express excitement. The more common sentiment among this group is relief: 53% of young Republicans and GOP leaners say this.

Black Democrats are more likely (80%) than whites (59%) to express disappointment – and less likely to express anger – about Trump’s victory. 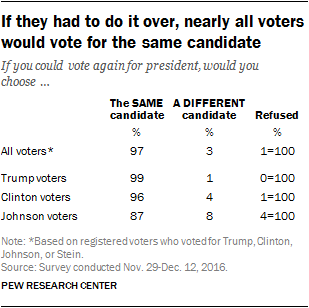 Slightly fewer Johnson voters (87%) say they would choose the same candidate if they could vote again for president, while just 8% say they would have voted for a different candidate.

Much of the focus of the 2016 presidential election was on the people who turned out to vote, but a sizeable minority of Americans decided not to vote or were unable to do so. And among those citizens who say they did not vote on November 8, 44% say they wish that they had, while 55% say they do not.1 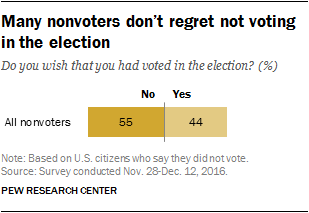 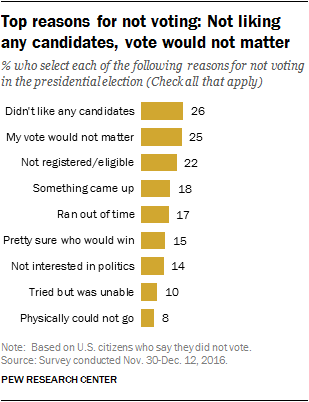 Other reasons for not voting relate to timing: 18% say something came up that kept them from voting, while 17% say that they ran out of time.

About three-in-ten of those who say they did not vote also indicate technical or physical obstacles to voting: 22% say that they are not registered or not eligible to vote and 8% say that they physically could not get to the polls.

One-in-ten (10%) say that they tried to vote but were unable. About one-in-six (15%) nonvoters say that they were “pretty sure who would win” the election. And more generally, 14% report that they are “not that interested in politics” as a reason for not participating in the election.

There are few partisan or demographic differences among the reasons people give for not voting, but there are modest differences by age.

Notably, mentions that “I did not think my vote would matter” are higher among nonvoters under age 30 than among those 50 and older (33% vs. 13%) and young nonvoters are more likely than those 50 and up to say that they were “pretty sure who would win” (24% vs 6%).

Those who report not voting are younger, more likely to be nonwhite 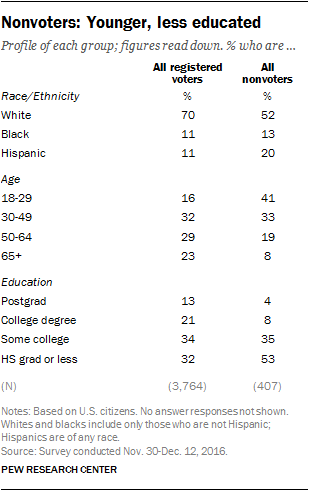 Nonvoters less likely to have had a conversation about the election 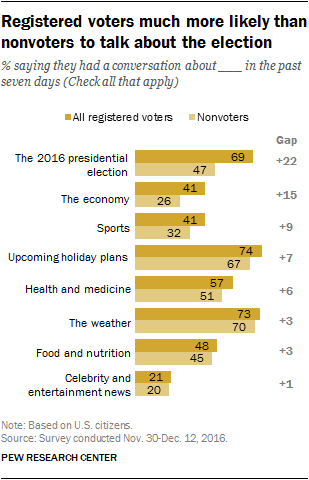 And fewer nonvoters (26%) than registered voters (41%) say that they had conversations about the economy in the last seven days.

On many other topics of conversation there is little difference between what registered voters and nonvoters communicate about. All registered voters and nonvoters are about as likely to say they had conversations about upcoming holiday plans (74% vs. 67%), health and medicine (57% vs. 51%), the weather (73% vs. 70%), food and nutrition (48% vs. 45%) or celebrity and entertainment news (21% vs. 20%).

In Election’s Wake, Partisans Assess the State of Their Parties 1. Partisans’ views of their parties, impact of Trump’s election on the GOP 2. Trump, Congress and prospects for bipartisanship 3. Views of Trump, other political figures and the parties
4. Retrospective views of the campaign
Nearly all voters would cast the same ballot today as on Election DayNonvoters’ election experienceThose who report not voting are younger, more likely to be nonwhiteNonvoters less likely to have had a conversation about the election
Methodology