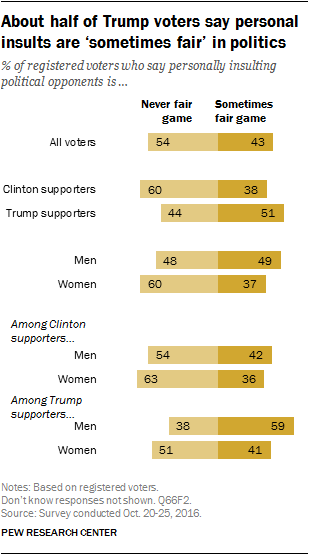 With a few weeks to go in a 2016 presidential campaign that has witnessed a fair amount of mudslinging, most registered voters (54%) say that “personally insulting political opponents is never fair game” in politics, while 43% say personal insults are “sometimes fair game.”

Among all voters, women (60%) are more likely than men (48%) to think that personal insults in politics are off-limits. The gender gap is particularly pronounced among Trump backers; 59% of men who support Trump say insulting political opponents is sometimes fair game, compared with just 41% of women who back him. 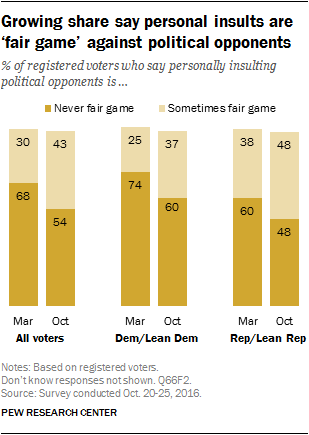 Both Democratic and Republican voters are now more accepting of personal attacks than they were six months ago. Still, most Democratic and Democratic-leaning registered voters continue to say personal insults are out of bounds (60% today, down from 74% in March). By comparison, Republican and Republican-leaning voters are now as likely to say personally insulting one’s opponent is sometimes fair game (48%) as they are to say it never is (48%). In March, six-in-ten Republican voters (60%) said insulting political opponents was never acceptable.

As was the case in March, Republicans who backed Trump in the GOP primary are more likely than those who supported other candidates to say personal insults may be fair game: 61% of Trump’s primary supporters view them as sometimes acceptable compared with 39% of Republican voters who supported a candidate other than Trump for the GOP nomination. There are no significant differences on this question between Democratic voters who backed Clinton and Sanders in the primary contest.

Though voters say campaign 2016 has been more negative than other recent elections, they are more critical of Trump’s tone than of Clinton’s. About six-in-ten voters (62%) say that Donald Trump has been “too personally critical” of Hillary Clinton in the presidential campaign so far, while 44% of voters say Clinton has been too critical of Trump.

The share saying Trump is too critical of Clinton is substantially higher than voters’ assessments of any other candidate – of either party – in elections going back more than two decades. By comparison, the share of voters saying Clinton is too critical of Trump is greater than the proportion saying this about Barack Obama’s treatment of both John McCain (22%) and Mitt Romney (35%), but less than the share saying John Kerry (52%) had been too critical of George W. Bush, and is on par with voters’ evaluations of several recent GOP candidates.

Many see key issues unaddressed in the campaign 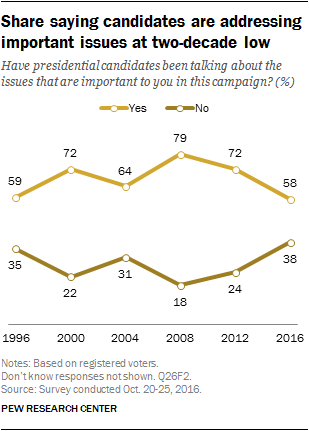 Overall, 58% of registered voters say that the presidential candidates are talking about the issues that are important to them this campaign, while 38% say they are not.

The share of registered voters who say the candidates are talking about important issues is down significantly from recent elections. In 2008, 79% said the candidates were talking about important issues, and 72% said this in 2012. In Pew Research surveys over the previous five presidential elections, 1996 was the last time voter sentiment on this question was about as negative as it is in the current survey.

Trump supporters (68%) are more likely than Clinton supporters (58%) to say the candidates have been talking about issues that are important to them in this campaign.

Over the past several months, voters have expressed dissatisfaction with the campaign. Last month, for instance, 57% said they had been feeling “frustrated” by the campaign, while 55% said they were “disgusted.”

Most voters expect political divides to remain or increase 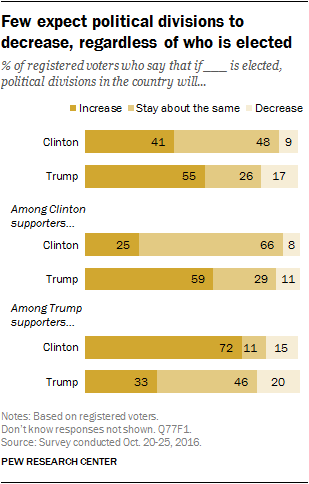 Among Trump backers, more say political divisions would increase (33%) than decrease (20%) under his presidency, while 46% expect little change. 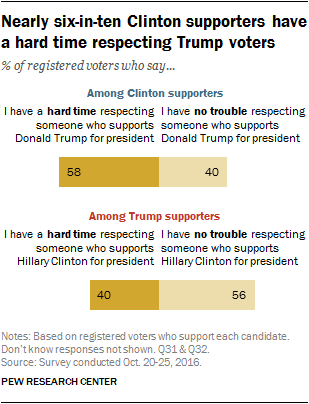 There are significant demographic differences among Clinton supporters. Whites, women, college graduates and younger Clinton backers are more likely to express difficulty respecting those who decide to vote for Trump. 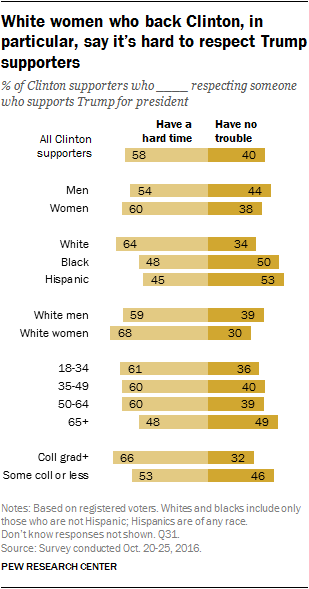 And while there are no significant differences between women and men who support Clinton on this question, white women who support her are particularly likely to express personal difficultly respecting Trump supporters: 68% say this (compared with 59% of white men who back Clinton).

Clinton’s supporters who are 65 and older are somewhat less likely than their younger counterparts to say they have a hard time respecting Trump supporters (48% say this, compared with about six-in-ten of Clinton voters under 65). 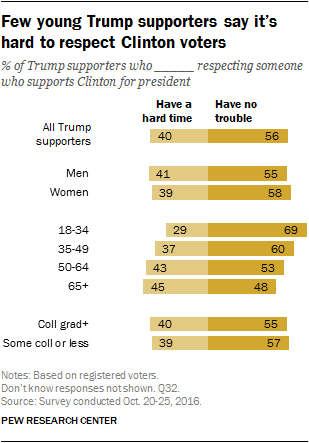 Clinton voters who have college degrees find it harder than those who do not to respect people who are voting for Trump: 66% of college graduates who are voting for Clinton say they have a hard time respecting someone who votes for Trump, while just 32% say they have no problem doing this. Among those with less education, views are roughly split (53% hard time, 46% no problem).

Next: 4. How voters view Clinton and Trump’s respect for men and women, racial and religious groups
← Prev Page
Page1Page2Page3You are reading page4Page5Page6Page7Page8Page9Page10
Next Page →