The issue of race has been a flashpoint in the 2016 presidential campaign and Clinton and Trump supporters are divided over whether the country pays too much – or not enough – attention to racial issues these days. 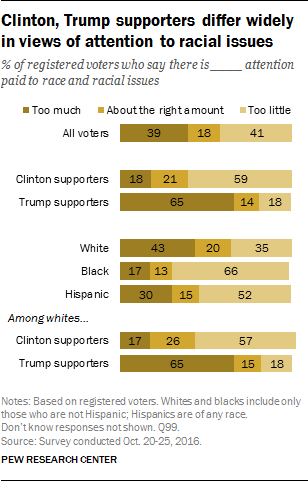 About half (52%) of Hispanics say there is too little attention paid to racial issues, compared with 30% who say too much attention is paid to these issues.

On immigration, most back path to legal status 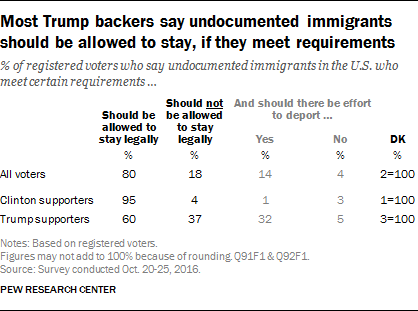 Nearly all Clinton supporters (95%) say there should be a way for undocumented immigrants currently in the country to stay here legally, if certain requirements are met. A smaller majority of Trump supporters (60%) also holds this view. There is somewhat more agreement between the two groups of supporters on this aspect of the immigration debate than on some others, including views on building a wall on the U.S. border with Mexico.

Voters who say undocumented immigrants should not be allowed to stay in the country legally were asked a follow-up question about deportation. 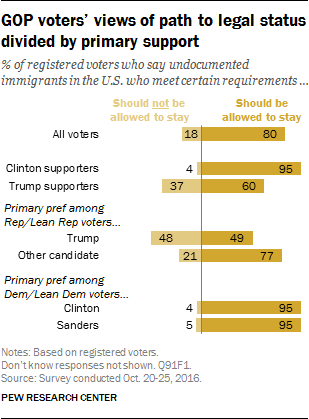 Most voters say abortion should be legal in most cases 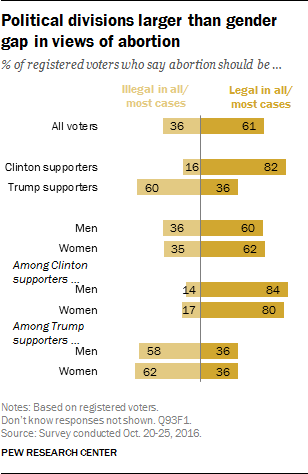 Little change in views on the health care law 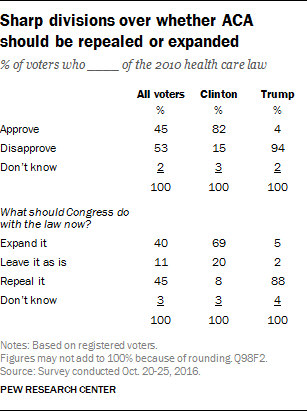 More than six years after its passage, the Affordable Care Act remains a divisive issue for voters. Currently, more registered voters say they disapprove (53%) than approve (45%) of the 2010 health care law.

Clinton supporters overwhelmingly approve of the health care law (82% approve, 15% disapprove). When asked what, if anything, should be done with the law now, a large majority (69%) favors Congress taking steps to expand the law. Two-in-ten say Congress should leave the law as it is, while few (8%) say the law should be repealed.

Trump supporters, by contrast, are nearly unanimous in their opposition to the ACA: 94% disapprove of the health care law and nearly nine-in-ten (88%) say they want Congress to repeal the law.

For more on public attitudes on the health care law, and how they have changed over time, see Pew Research Center’s Fact Tank blog.

Views on the Supreme Court and ‘constitutional originalism’ 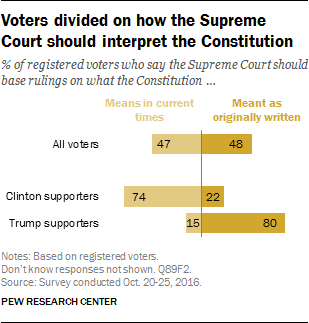 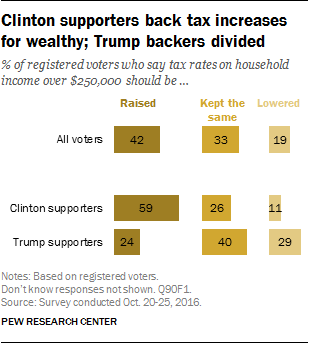 About six-in-ten Clinton backers (59%) say tax rates on those who earn more than $250,000 should be increased, compared with 26% who say they should stay the same and 11% who think they should be lowered.

A greater share of Trump supporters (40%) say tax rates on household income over $250,000 should be kept the same as they are now than either support lowering (29%) or raising (24%) these rates.

No shift in anger, frustration with the federal government 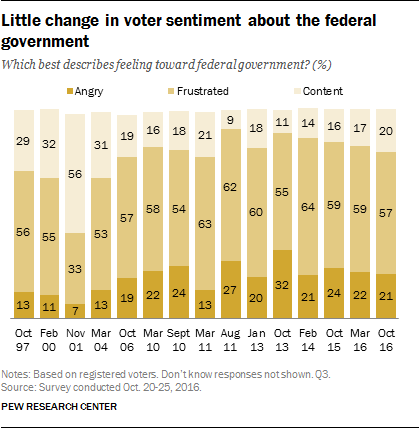 Though few voters express contentment with the federal government, anger toward it is no higher among voters today than it has been since February 2014; and it remains lower than it was during the October 2013 (32%) federal government shutdown.

Feelings about government remain highly partisan, with GOP voters more likely than Democrats to express anger at government, and the divide is little changed in recent months. 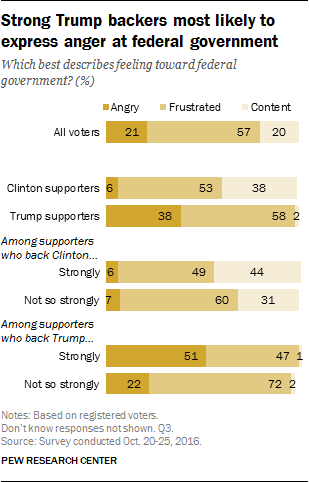 Views of personal finances among Clinton and Trump supporters 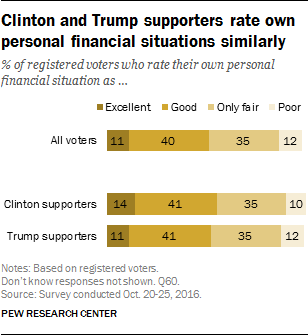 While Clinton and Trump supporters hold opposing views on a range of policies and issues, their assessments of the current state of their personal finances are almost identical. Among Clinton supporters, 55% say they are in either excellent or good shape financially, while 45% say they are in only fair or poor shape. Among those who support Trump, 52% describe their personal finances as excellent or good, compared with 47% who say their finances are only fair or poor.

While current financial assessments among Trump and Clinton supporters are very similar, there is a wide gap in expectations for personal finances over the next year, with those who support Trump much more pessimistic than those who support Clinton. 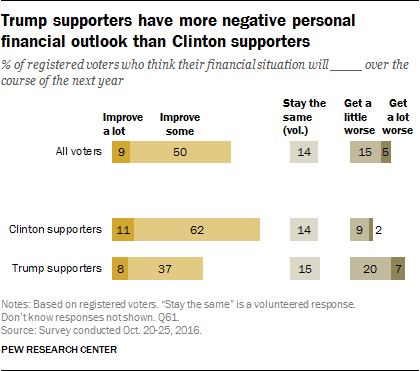 Nearly three-quarters (73%) of Clinton supporters think their personal financial situation will improve a lot or some over the course of the next year, compared with just 10% who think their own situation will get a lot or a little worse (14% expect their finances to stay about the same).

By contrast, fewer than half of Trump supporters (45%) think their own finances will improve over the next year; 27% think they will get worse, and 15% expect them to stay about the same.

Attitudes among Trump supporters have become more negative over the past four months. In June, 61% of Trump supporters believed their situation would improve compared with 45% in the current survey. Clinton supporters are about as optimistic today that their personal financial situation will improve over the next year as they were in June (73%). 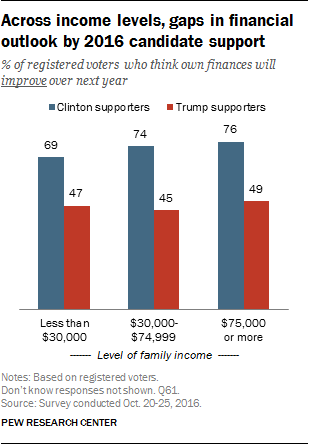 Clinton supporters are more optimistic than Trump supporters about their personal financial outlook across all levels of household income. For example, among those with family incomes of less than $30,000 a year, 69% of Clinton supporters expect their own finances to improve over the course of the next year, compared with just 47% of Trump supporters. Similarly, in households earning $75,000 a year or more, 76% of those who support Clinton – compared with 49% of those who support Trump – think their own financial situation will improve over the next year.

As Election Nears, Voters Divided Over Democracy and ‘Respect’ 1. Views of the candidates 2. Factors underlying voter preferences, positive and negative voting 3. Views of candidate ‘insults,’ criticism and political divisions 4. How voters view Clinton and Trump’s respect for men and women, racial and religious groups 5. Confidence in election, views of U.S. democracy
6. Views of domestic issues: race, immigration, health care, abortion, Supreme Court
On immigration, most back path to legal statusMost voters say abortion should be legal in most casesLittle change in views on the health care lawViews on the Supreme Court and ‘constitutional originalism’Opinions about increasing taxes on higher-income householdsNo shift in anger, frustration with the federal governmentViews of personal finances among Clinton and Trump supportersPersonal financial outlook reflects political divide
7. Opinions on U.S. international involvement, free trade, ISIS and Syria, Russia and China 8. The state of the parties, Obama approval Methodology