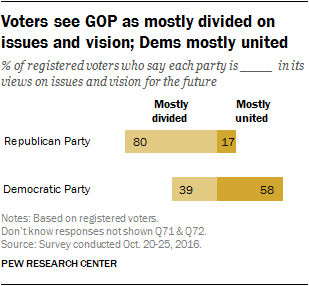 Eight-in-ten registered voters (80%) say the Republican Party is mostly divided when it comes to its views on issues and vision for the future, while just 17% say the GOP is united.

By contrast, a majority of voters (58%) say that the Democratic Party is mostly united in its views on issues and vision for the future; 39% say the party is mostly divided on these matters. 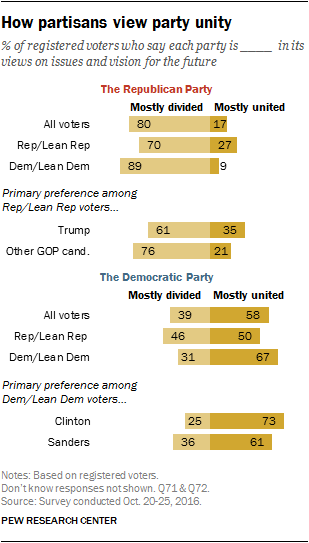 Seven-in-ten GOP voters (70%) think their party is divided; only about a quarter of Republican and Republican-leaning voters (27%) say the party is united.

Two-thirds of Democrats (67%) say their party is generally united on issues and vision for the future. Majorities of both those who supported Bernie Sanders (61%) and Clinton (73%) in the primaries say this; though Sanders primary backers are somewhat less likely than Clinton’s to say the party is unified. 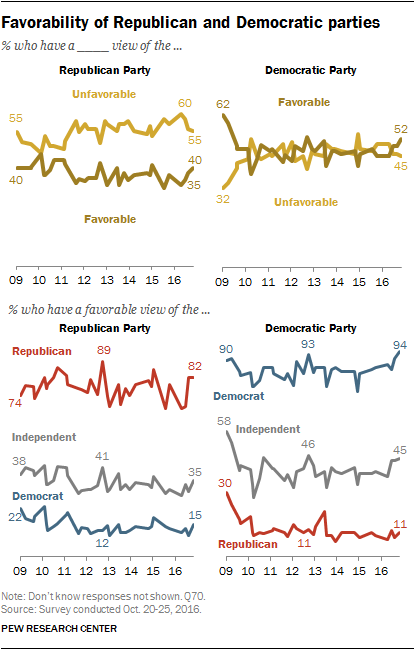 Among the general public, assessments of both the Republican and Democratic parties have ticked up in recent months. Views of the Democratic Party are in net positive territory for the first time since June 2013: 52% currently rate it favorably while 45% rate it unfavorably.

Public views of the GOP have improved from earlier in the year, but they remain in negative territory: 55% now have an unfavorable view of the Republican Party while 40% view it favorably.

As in past election years, the views of partisans have grown more favorable toward their own party as the election approaches. About eight-in-ten Republicans (82%) now have a favorable opinion of the GOP; that’s identical to the share who had a favorable view in August, but up from 69% in June.

Democrats continue to hold highly positive views of their party. Fully 94% have a favorable opinion of the party. Independents’ ratings of the Democratic Party remain more positive than those of the Republican Party (45% vs. 35%).

Barack Obama’s job approval rating now stands at 54%, up 8 points since the start of the year, and as high as it has been since December 2012. Though little changed over the last few months, ratings of the president’s job performance have ticked up gradually over the course of 2016.

More positive views of the president can be attributed to stronger ratings from Democrats (currently, 90% approve of the job he is doing, up 9 points from the beginning of this year) and independents (52% now approve of Obama’s job performance, also up 9 points from January). Republican ratings of Obama have changed little over the course of the year; just 11% approve of his performance.