Less than two weeks before Election Day, voters remain skeptical that either Clinton or Trump would make a good president; and there has been no improvement in views of their potential presidencies over the course of the 2016 campaign. 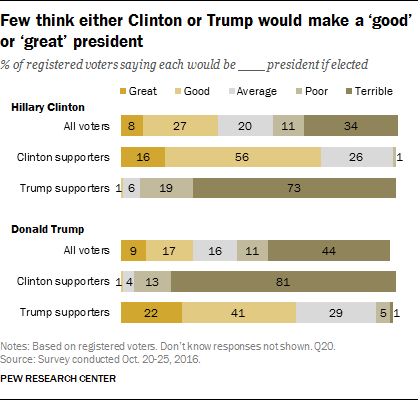 Opinions about Clinton and Trump as possible presidents have changed little over the course of the 2016 campaign, and voters’ expectations for either candidate are no more positive today than they were in January.

Voters are highly critical of both Clinton and Trump in two key respects: Majorities of registered voters describe each as “hard to like,” and say each has “poor judgment.” 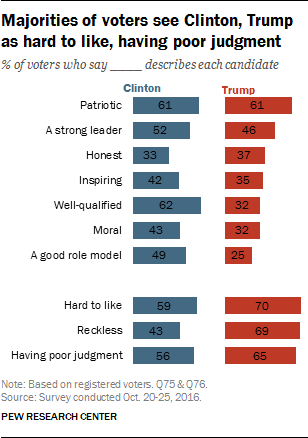 While these views are very negative, voters also refrain from rendering positive judgments on Clinton and Trump on some traits – particularly when it comes to their honesty. Just 33% of voters describe Clinton as honest, while slightly more (37%) say this describes Trump.

On several traits and characteristics, Clinton is more highly regarded than Trump. But Clinton’s own evaluations are not all that positive. About half (49%) say she is a good role model, which is nearly double the share saying that about Trump (25%).

Voters see Clinton’s major strength as her qualifications. About six-in-ten (62%) say she is well-qualified, compared with just 32% who say the same of Trump. And far fewer describe Clinton as reckless (43%) than say that about Trump (69%).

Roughly half of voters say Clinton (52%) is “a strong leader,” while somewhat fewer describe Trump in this way (46%).

The one characteristic that voters say Clinton and Trump have in common is patriotism. Identical percentages describe each as patriotic (61%).

How current candidates compare with Obama and McCain

In October 2008, many more voters viewed both Barack Obama and John McCain as honest than say that about Clinton and Trump today. 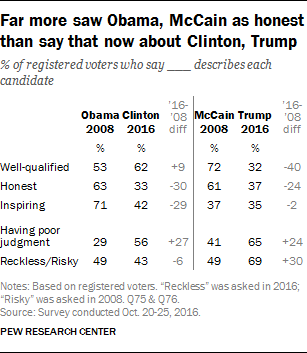 On the question of “reckless,” there is no direct comparison to 2008; respondents were asked if Obama and McCain were “risky.” At that time, 49% said Obama was risky, which is somewhat higher than the share who calls Clinton reckless today (43%). Trump is widely viewed as reckless (69%); fewer characterized McCain as risky eight years ago.

Views among the candidates’ supporters

Among supporters of Clinton and Trump, substantial shares attribute positive traits to their own candidate, and few describe them negatively. But there are some differences between the two cohorts in how they think of their candidate. 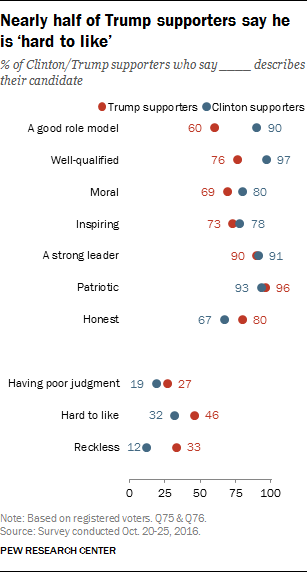 On the other hand, while 80% of Trump supporters think of him as honest, a smaller majority (67%) of Clinton backers say she is honest. 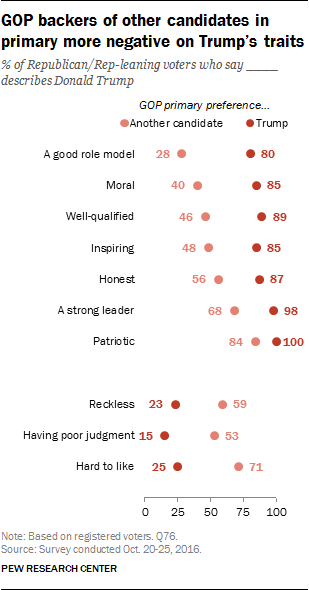 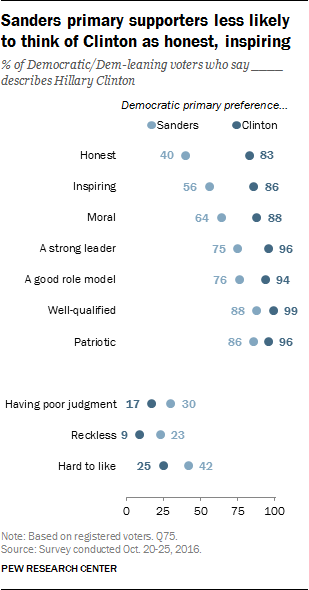 There are striking differences on certain characteristics of Clinton based on primary support as well. Just 40% of those who say they supported Bernie Sanders in the Democratic primary think of Clinton as honest, compared with more than twice as many (83%) of her primary supporters who say the same.

Though majorities of Democratic and Democratic-leaning voters who supported Bernie Sanders in the Democratic primary think of Clinton as moral (64%) and a strong leader (75%), these views are more widely held among those who backed Clinton for the Democratic nomination.

How well do the candidates understand the needs of voters? 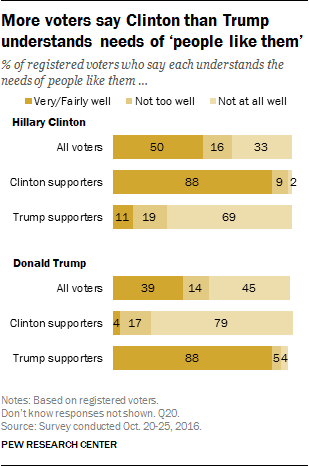 When it comes to views on how well the candidates relate to voters, more say Clinton than Trump understands the needs of “people like them” well. 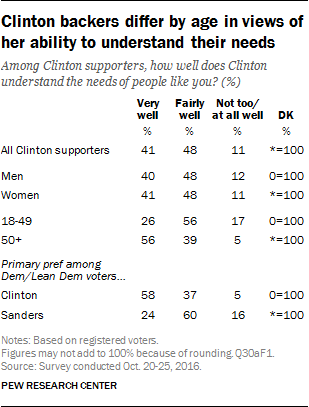 There are demographic differences among both Clinton and Trump supporters in the share who say their candidate understands their needs.

Voters age 50 and over who support Clinton are much more likely than supporters under age 50 to say Clinton understands the needs of people like them very well (56% vs. 26%). 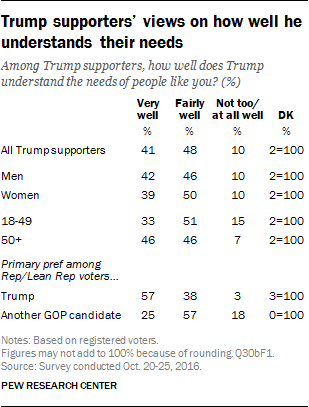 There is no gender gap among Clinton supporters on this question: 41% of women and 40% of men say she understands the needs of people like them very well.

As is the case among Clinton supporters, supporters of Trump who are age 50 and older are more likely than those ages 18-49 to say he understands their needs very well (46% vs. 33%).

About the same share of men (42%) and women (39%) who support Trump say he understands their needs very well. 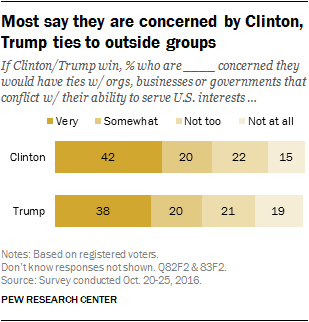 Voters express concern over both Donald Trump and Hillary Clinton’s ability to serve the country’s best interests, if elected. A majority of voters say they are very or somewhat concerned Clinton (62%) or Trump (59%) would have relationships with organizations, businesses or foreign governments that would conflict with their abilities to serve the nation’s best interests. Fewer than two-in-ten voters say they are not at all concerned that Trump (19%) or Clinton (15%) would have conflicts of interest.

Most say the candidates represent the core principles of their parties

Democratic voters overwhelmingly say that Hillary Clinton “represents the core principles and positions that the Democratic Party should stand for.” About eight-in-ten (83%) say she does, while just 14% say she does not. 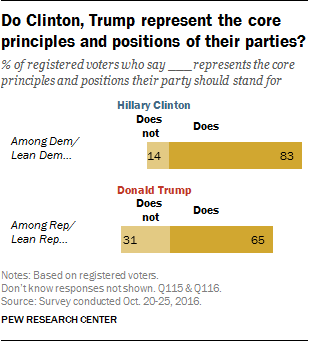 Three-quarters or more of nearly all Democratic subgroups see Clinton as representative of their party’s core values and policy positions.

On the GOP side, about two-thirds of Republican voters (65%) say that Donald Trump represents the core principles and positions of the GOP, while roughly three-in-ten (31%) do not see Trump as someone who represents what their party should stand for.

Republican voters who have not attended or not completed college are more likely than Republican college graduates to say that Trump represents core Republican principles and issue positions (69% vs. 56%).

The vast majority of conservative Republican and Republican-leaning voters see Trump as representative of what the GOP should stand for (75%), while among moderate and liberal Republicans assessments are more mixed (52% say that he does, 45% say that he does not). 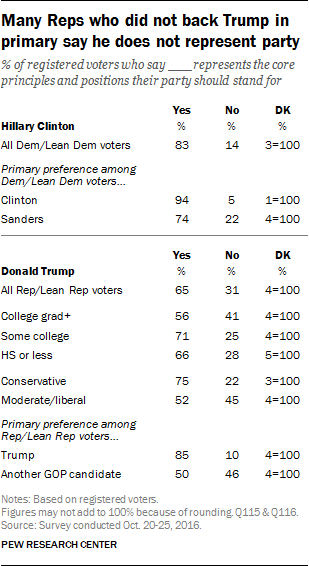 Primary support is strongly related to assessments about whether the candidates represent what their parties should stand for. In particular, among Republican voters many who did not back Trump for the GOP nomination say he does not represent the Party’s principles and positions.

Among Democratic voters, more than nine-in-ten of those who supported Clinton for the nomination (94%) and about three-quarters of Sanders primary backers (74%) now say Clinton represents core Democratic principles and positions.

This represents a shift in views among Sanders supporters over the last several months. Before the party conventions, a CBS/New York Times poll found some skepticism in Sanders supporters’ attitudes about Hillary Clinton. In July, just 48% of Democrats who reported voting for Bernie Sanders in the primary said that Clinton “represents the core principles and values that the Democratic Party should stand for.”

As Election Nears, Voters Divided Over Democracy and ‘Respect’
1. Views of the candidates
Traits and characteristicsHow current candidates compare with Obama and McCainViews among the candidates’ supportersHow well do the candidates understand the needs of voters?Voters concerned by candidates’ perceived conflicts of interestsMost say the candidates represent the core principles of their parties
2. Factors underlying voter preferences, positive and negative voting 3. Views of candidate ‘insults,’ criticism and political divisions 4. How voters view Clinton and Trump’s respect for men and women, racial and religious groups 5. Confidence in election, views of U.S. democracy 6. Views of domestic issues: race, immigration, health care, abortion, Supreme Court 7. Opinions on U.S. international involvement, free trade, ISIS and Syria, Russia and China 8. The state of the parties, Obama approval Methodology