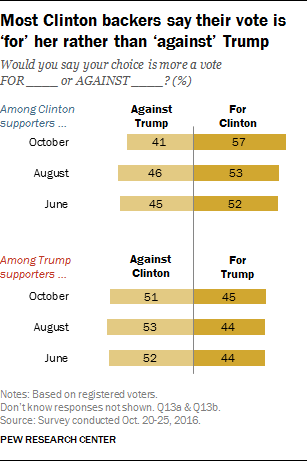 With less than two weeks to go before the election, 46% of registered voters favor Hillary Clinton or lean toward Clinton, while 40% support Trump or lean toward Trump; 6% back Libertarian Gary Johnson, while 3% support Green Party nominee Jill Stein.

Among Trump supporters, about as many say their choice is a vote against Clinton (51%) as say it is for Trump (45%). There has been little movement in these views since the summer. 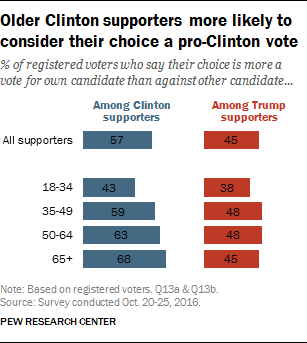 Among Clinton supporters, younger voters are less likely than older voters to see their choice in positive terms. About six-in-ten Clinton voters ages 35 and older say they think of their choice more as a vote for Clinton than against Trump. By contrast, only 43% of Clinton supporters under 35 say this, while 56% view it more as a vote against Trump. Among Trump supporters, age differences in these views are less pronounced.

The share of Trump backers who view their voting decision in a negative light is much greater than it was among supporters of most other candidates in recent presidential cycles. 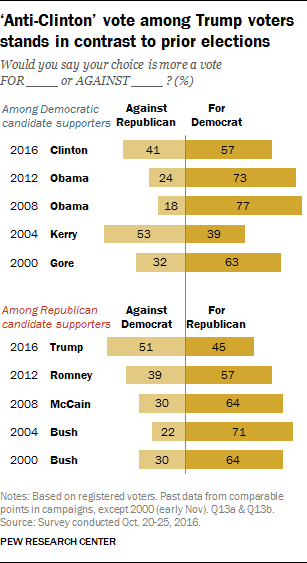 Just 45% of Trump supporters say they are mostly voting “for” him. In elections since 2000, clear majorities of the supporters of GOP candidates have considered their vote more in positive than negative terms. In the two most recent non-incumbent elections, 2000 and 2008, roughly two-thirds of those who supported George W. Bush and John McCain (64% each), respectively, said their choice was a vote in favor of their candidate.

Among recent candidates of either party, only supporters of John Kerry in 2004 were more likely to view their choice as an anti-Bush vote (53% said this) than as a pro-Kerry vote.

Strength of support: how Clinton, Trump compare to prior candidates 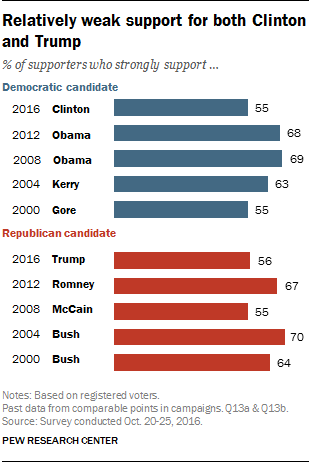 Just over half of both Clinton (55%) and Trump backers (56%) say they strongly support their candidate. But levels of strong support were considerably higher among backers of both Obama (68%) and Romney (67%) in 2012, and for most major party candidates in elections dating back to 2000.

The current low shares of backers who strongly support both Clinton and Trump are matched only by Gore’s supporters in 2000 and McCain’s in 2008. Both Obama and Bush, in both their first campaigns and their re-elections, garnered larger shares of strong support from their backers.

How would Clinton compare to Obama, if elected? 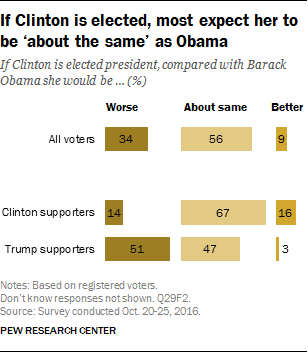 While relatively few Clinton supporters think she would make a worse president than Obama, men (21%) are somewhat more likely to say this than women (10%). And Clinton supporters younger than 50 are about twice as likely as those 50 and older to express this view (20% vs. 8%).

Is Clinton’s gender a factor in campaign? 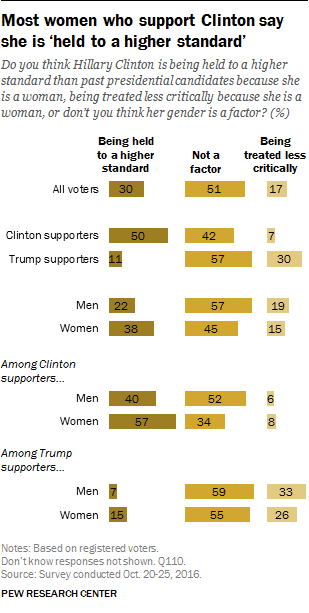 Most Trump supporters (57%) say that Clinton’s gender is not a factor; 30% say she is being treated less critically than past presidents because she is a woman, while just 11% say she is being held to a higher standard.

Overall, women (38%) are somewhat more likely than men (22%) to say Clinton is being held to a higher standard because she is a woman; 57% of men and 45% of women say her gender is not a factor. 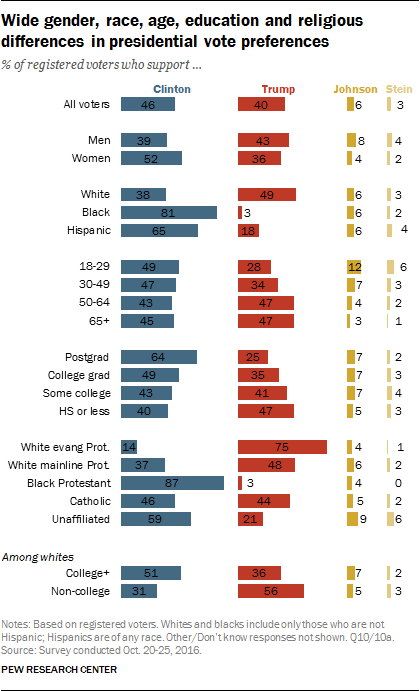 As has been the case throughout the general election campaign, there are wide gender, race, age, education and religious divides in presidential vote preference. 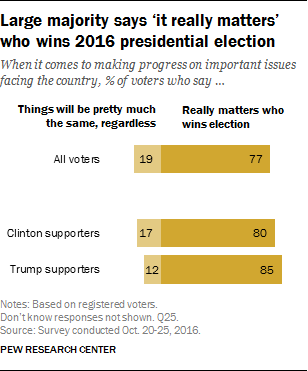 Most voters agree that the stakes of this election are high. A large majority (77%) says that as far as making progress on
the important issues facing the country, it really matters who wins the 2016 presidential election. Just 19% say that things will be pretty much the same regardless of who is elected president.

This is a rare point of consensus among Clinton and Trump voters. Wide majorities of both Trump (85%) and Clinton (80%) supporters say it really matters who wins the election. 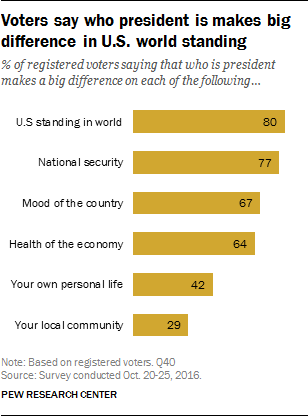 Voters say the outcome of this election really matters in terms of addressing key issues, but they draw distinctions about how much of a difference who is president makes across different areas.