More Americans disapprove than approve of the deal struck last week by the U.S., Iran and five other nations to limit Iran’s nuclear program: Among the 79% of Americans who have heard about the agreement, just 38% approve, while 48% disapprove (14% do not offer an opinion).

There is widespread skepticism about aspects of the agreement, particularly the Iranian leadership’s commitment to the terms of the deal: Most of those familiar with the agreement say they have not too much (35%) or no confidence at all (38%) that Iran’s leaders will uphold their side of the agreement. And while there is greater confidence in the U.S. and international agencies’ ability to monitor Iran’s compliance, 54% are not too (33%) or not at all (21%) confident, while a smaller share (45%) express at least a fair amount of confidence in their ability.

Views about the agreement’s effect on U.S.-Iranian relations also are split: Though a plurality (42%) of those who have heard about the deal say there will be little change, about as many think relations between the two nations will worsen (28%) as think they will improve (25%) as a result of agreement. 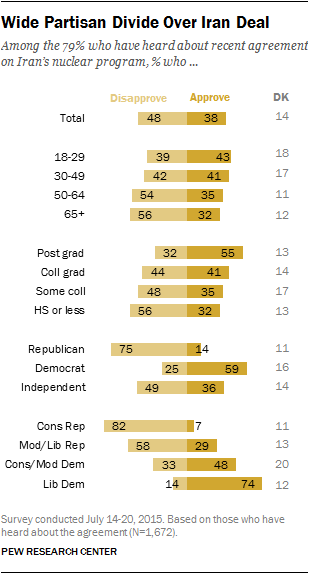 The latest national survey by the Pew Research Center, conducted July 14-20 among 2,002 adults, including 1,672 who have heard about the agreement, finds deep partisan divides. Among those who are familiar with the agreement, three-quarters of Republicans (75%) disapprove of it, while just 14% approve. Opposition is particularly pronounced among conservative Republicans, with 82% disapproving of the agreement. Among moderate and liberal Republicans a smaller majority (58%) disapproves.

Democratic support for the agreement outweighs opposition by more than two-to-one (59% approve, 25% disapprove). And liberal Democrats are particularly supportive: 74% approve of the deal. Conservative and moderate Democrats who are familiar with the agreement support it by a considerably narrower margin (48% approve, 33% disapprove).

Most Skeptical That Iran Will Stick to Terms of Agreement 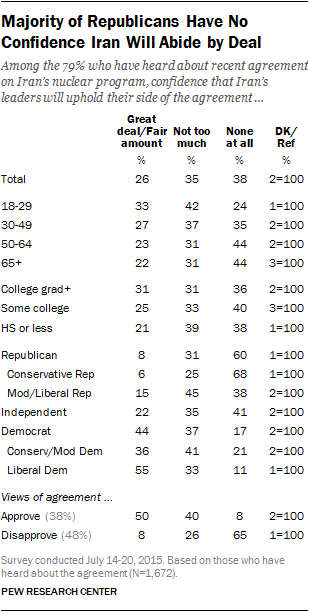 Before the nuclear agreement was announced on July 14, there was modest support for direct negotiations between the United States and Iran over the country’s nuclear program. However, that was accompanied by a deep distrust of Iranian leaders. In March, 63% of the public said that Iran’s leaders were “not serious” about addressing international concerns over their country’s nuclear enrichment program.

Republicans, in particular, are dubious: 60% say they have no confidence at all that Iran will uphold its side of the agreement; another 31% have little confidence. And while 44% of Democrats express some confidence in the Iranian leaders to honor the agreement, 54% do not. 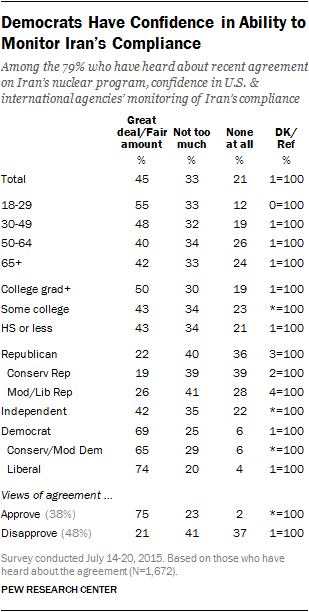 While there is greater confidence in the United States and international agencies’ ability to monitor Iran’s compliance than in the Iranian leadership’s intentions, still, just 45% say they have a great deal or fair amount of confidence in this monitoring, while somewhat more (54%) express little or no confidence.

And, as with views of the overall agreement, there are substantial partisan divides: Just 22% of Republicans say they have a great deal or fair amount of confidence in the international monitoring of Iran’s compliance, compared with 69% of Democrats. 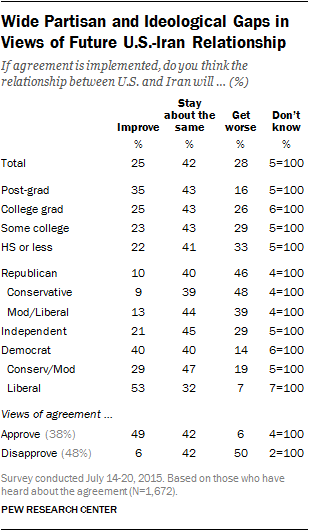 A 42% plurality of those who have heard about the agreement over Iran’s nuclear program say they expect relations between the U.S. and Iran to change little if it is implemented; 28% expect that relations will worsen, and about as many (25%) predict they will improve.

Though about four-in-ten of those in all educational groups expect little change in the two countries’ relationship, those with post-graduate degrees are more likely than those with less education to expect an improvement in U.S.-Iranian relations in the future (35% say this, compared with a quarter or fewer of those without graduate degrees).

Consistent with the partisan divide in support for the deal, most Republicans say the agreement’s implementation will either have little (40%) or a negative (46%) impact on U.S.-Iranian relations, while most Democrats say the deal will have either a positive (40%) or no (40%) effect. Independent opinions largely mirror overall views: A 45% plurality say there will be little change in relations between the two nations, although independents are somewhat more likely to say the agreement will worsen (29%), rather than improve (21%), relations.

Most Americans Familiar With Iran Agreement

While just 35% of Americans say they have heard a lot about the agreement over Iran’s nuclear program, a sizable majority (79%) has heard at least a little about it. 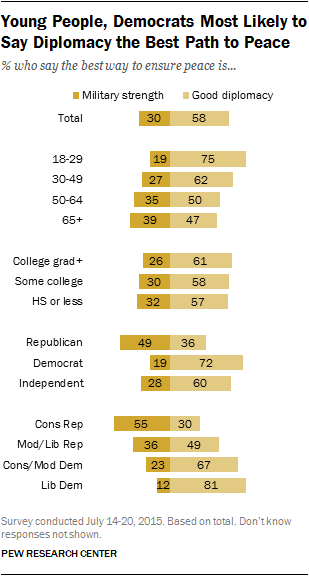 There continue to be wide partisan and ideological divides on this question: While 72% of Democrats (including 81% of liberal Democrats) say that good diplomacy provides the best path to peace, Republicans are more likely to say military might, rather than diplomacy, is the best way to ensure peace (49% vs. 36%).

Question Wording and Views of the Iran Agreement

One week after the announcement of the Iran agreement, public opinion on the deal varies depending on how the issue is framed. The Pew Research Center question asks people first a general question about their familiarity with the deal: “How much, if anything, have you heard about a recent agreement on Iran’s nuclear program between Iran, the United States and other nations?” and then asks people “From what you know, do you approve or disapprove of this agreement?” This question format finds that disapproval significantly outweighs approval, both among the public overall (33% approve, 45% disapprove, 22% have no opinion), and among the 79% of the public who have heard about the deal (38% approve, 48% disapprove, 14% have no opinion).

A Washington Post/ABC News survey conducted over approximately the same field period finds significantly more support than opposition to the deal among the overall public (56% support, 37% oppose, 7% have no opinion). This question includes a description of the agreement: “As you may know, the U.S. and other countries have announced a deal to lift economic sanctions against Iran in exchange for Iran agreeing not to produce nuclear weapons. International inspectors would monitor Iran’s facilities, and if Iran is caught breaking the agreement economic sanctions would be imposed again. Do you support or oppose this agreement? Do you feel that way strongly or somewhat?” 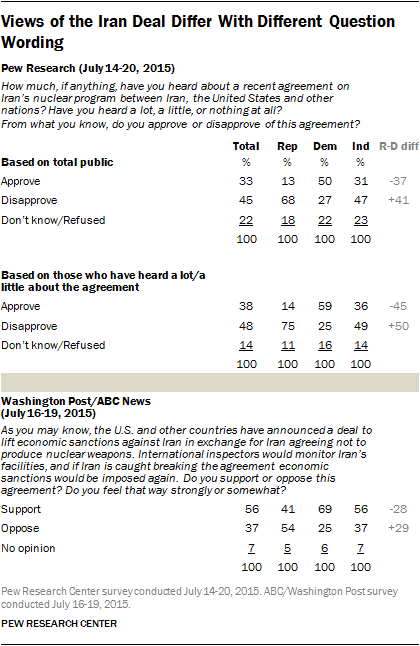 The different findings on public views of the Iran nuclear agreement in the Washington Post/ABC News and Pew Research Center surveys highlight how question wording – and the information provided in a question – can impact public opinion, particularly on issues where public views are still being shaped and information levels are relatively low. The Pew Research question, which does not describe the agreement, finds lower levels of support than the Post/ABC News question, which details the intention to monitor Iran’s facilities and raises the possibility of re-imposition of sanctions if Iran does not comply.

In other questions, both the Washington Post/ABC survey and the Pew Research Center survey find substantial public skepticism about the agreement. The Pew Research Center survey asks about confidence in Iran’s leadership to uphold their end of the deal and the ability of the U.S. and international agencies to monitor compliance, finding that majorities are not confident about either. And the Washington Post/ABC News poll asks people how confident they are “that this agreement will prevent Iran from developing nuclear weapons – very confident, somewhat confident, not so confident or not confident at all,” finding that 64% are not confident in this.

Though levels of support for the agreement differ depending on how the question is asked, both questions find large divides between Democrats and Republicans in approval of the deal, although that division is more pronounced in the Pew Research question than in the Washington Post/ABC News question.