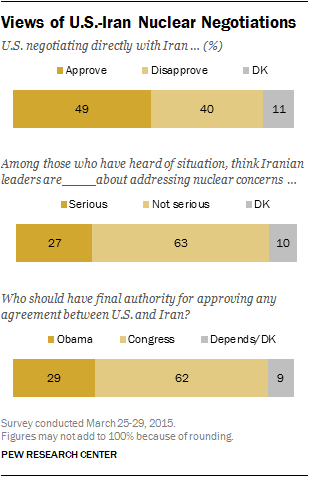 Ahead of a March 31 deadline for nuclear talks with Iran, more Americans approve (49%) than disapprove (40%) of the United States negotiating directly with Iran over its nuclear program. But the public remains skeptical of whether Iranian leaders are serious about addressing international concerns over their nuclear enrichment program.

The latest national survey by the Pew Research Center, conducted March 25-29 among 1,500 adults, finds that just 27% have heard a lot about the nuclear talks between the United States and Iran in Lausanne, Switzerland. Another 49% have heard a little about the negotiations, while 24% have heard nothing at all.

Among those who have heard at least a little about the nuclear talks (76% of the public), 63% say Iranian leaders are not serious “about addressing international concerns about their country’s nuclear enrichment program.” Just 27% say Iranian leaders are seriously addressing international concerns. These views are virtually unchanged since December 2013, when 62% of those aware of the negotiations said Iranian leaders were not serious in responding to concerns about the country’s nuclear program. 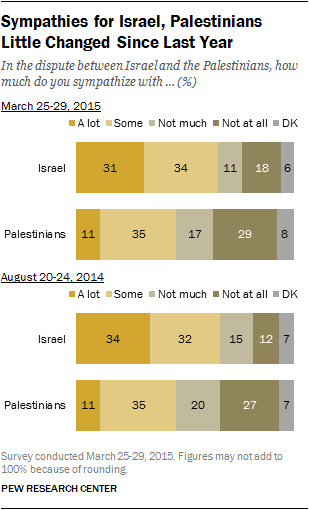 And opinions about Benjamin Netanyahu have changed only modestly since before his address to Congress and re-election as Israel’s prime minister. Currently, 31% express a favorable opinion of Netanyahu, while 28% view him unfavorably. A month ago, 38% viewed Netanyahu favorably and 27% unfavorably. A relatively large percentage (41%) continues to say they have not heard of Netanyahu or have no opinion of him.

There are deep ideological divisions in views of U.S. negotiations with Iran: 72% of liberal Democrats approve of the negotiations, while 62% of conservative Republicans disapprove of them.

Among those who have heard a lot or a little about the U.S.-Iran negotiations, 53% approve of the talks while 40% disapprove. Among the nearly quarter of Americans (24%) who have heard nothing about them, opinion is divided: 36% approve, 41% disapprove, while 23% do not express an opinion. 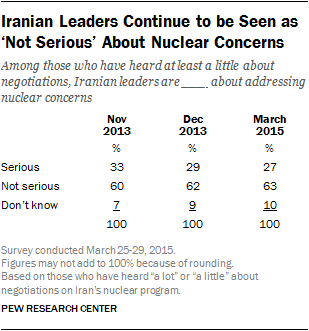 The public continues to have doubts about whether Iranian leaders are serious in addressing concerns about the country’s nuclear intentions. Among those who have heard at least a little about the situation, 63% say Iranian leaders are not serious about addressing international concerns, compared with 27% who say they are. These opinions have not changed significantly since late 2013. 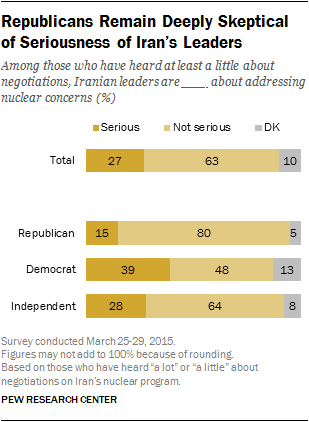 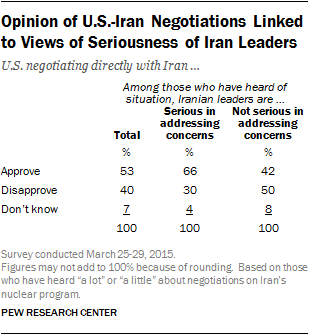 Opinions about the U.S. negotiating directly with Iran differ significantly by whether or not Iranian leaders are viewed as serious in addressing international concerns over their nuclear program.

Most Say Congress Should Have Final Authority Over Nuclear Deal 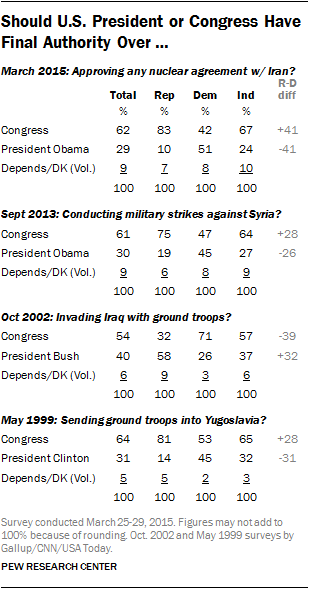 By a wide margin, more say Congress (62%) than President Obama (29%) should have the final authority for approving any nuclear agreement between the U.S. and Iran. Republicans are about twice as likely than Democrats to say that Congress should have final say over the agreement (83% vs. 42%).

In prior instances when the question of congressional approval of military force was being considered, majorities also wanted final approval to rest with the Congress. In September 2013, for example, 61% said that Congress should have final authority in deciding whether the U.S. should conduct military strikes against Syria, while just 30% said Obama should have this authority.

And during the buildup to the war in Iraq in October 2002, 54% said Congress, not former President George W. Bush, should have final approval over whether the U.S. should invade Iraq with ground forces. During the Clinton administration, 64% favored Congress having final approval over sending U.S. ground troops to what was then Yugoslavia. 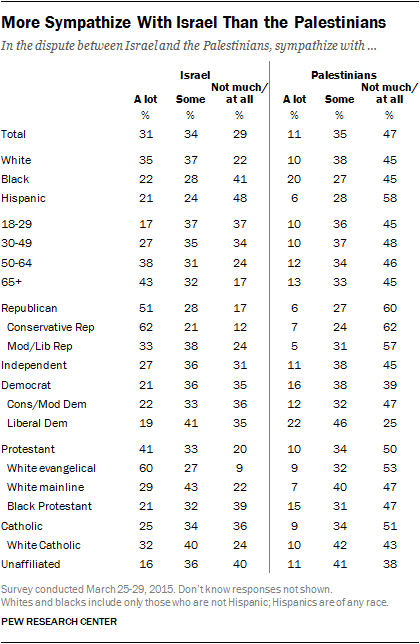 In the dispute between Israel and the Palestinians, the public remains more sympathetic to Israel. Sentiment for both sides is mostly unchanged since last August.

About three-in-ten (31%) say they have “a lot” of sympathy for Israel. An additional 34% have some sympathy; 11% have “not much” sympathy and 18% sympathize with Israel “not at all.” The share saying they have no sympathy at all for Israel in the dispute has risen six points since August (12%).

Sympathy for Israel still outpaces that for the Palestinians: Just 11% sympathize a lot with the Palestinians, 35% have some sympathy, 17% not much and 29% have no sympathy at all.

Conservative Republicans are especially sympathetic toward Israel (62% a lot), compared with 33% of moderate and liberal Republicans. Sentiment toward the Palestinians is similar among Republicans by ideology.

A sizable portion of the public — 38% — has at least a lot or some sympathy for both Israel and the Palestinians in their dispute. Meanwhile, two-in-ten (20%) have lower levels of sympathies for both sides. 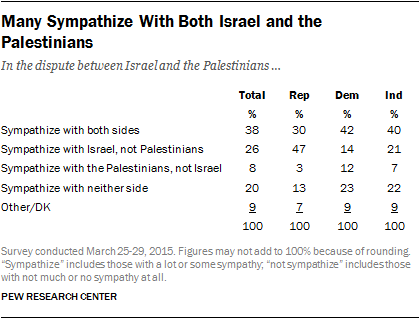 About as many have a favorable as unfavorable opinion of Israeli Prime Minister Benjamin Netanyahu (31% vs. 28%). Another 28% volunteer that they have not heard of Netanyahu and 13% can’t rate or refused. 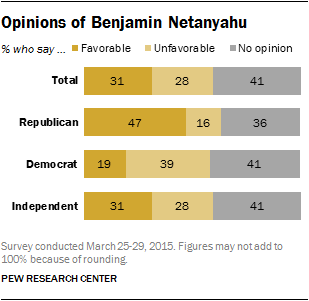 Netanyahu’s favorable rating has slipped seven points since February (from 38%), but there has been almost no change in unfavorable ratings (27% then, 28% now). About four-in-ten (41%) say they have never heard of Netanyahu or express no opinion of him, compared with 35% last month. 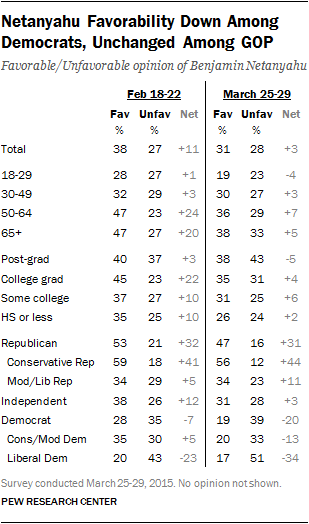 Opinion about Netanyahu is generally divided among all age groups and education levels. However, his support has slipped among older adults. Among those 50 and older, Netanyahu’s favorability rating has fallen 10 points compared with last month (37% now, 47% then). Favorable impressions of Netanyahu also have declined 10 points among those with a college degree but no graduate experience (35% now, 45% then).

Netanyahu remains an unfamiliar figure to many Americans, especially young people. Nearly half (47%) of those under 30 say they have never heard of Netanyahu, the highest percentage of any age group. The share of young people who say they have not heard of Israel’s prime minister is higher than it was last month (37%), amid coverage of his upcoming speech to Congress.