Heading into the final weeks before the midterm elections, Republican and Democratic voters are split not only over their candidate preferences, but also about the importance of key issues in the election.

Foreign policy, the budget deficit and immigration are among the most dominant issues for Republican voters; each is named by 70% or more as “very important” to their vote in the fall. But only about half of Democratic voters say each of these issues are very important to their vote decisions.

In contrast, both the environment and economic inequality rate as very important to about seven-in-ten Democratic voters—but no more than about four-in-ten Republicans.

The latest national survey by the Pew Research Center, conducted Sept. 2-9 among 2,002 adults (including 1,552 registered voters), finds that terrorism and the economy are top issues for both Republican and Democratic voters, though in both cases they rate as more important for Republicans than Democrats. 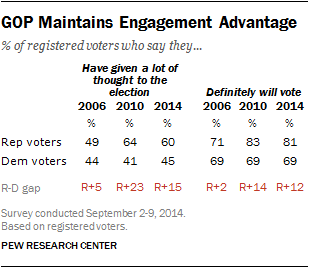 Overall, opinions of the Affordable Care Act have changed little over the past year. Currently, 44% approve of the law, while 52% disapprove.

The survey also finds that GOP voters continue to be more engaged with the midterm election than Democrats. Republican voters are 15 points more likely than Democrats to say they’ve given a lot of thought to the election, and 12 points more likely to say they definitely will vote. GOP voters also express more enthusiasm for voting in the upcoming midterm than their Democratic counterparts. 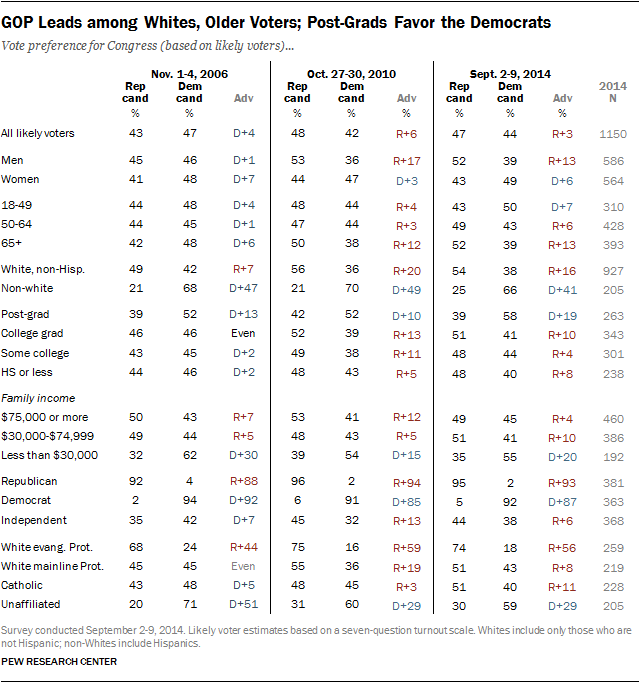 The internal dynamics of the race are similar to the 2010 campaign. The GOP performs strongest among whites, men, older voters and evangelical Protestants, while Democratic candidates garner more support from non-whites, women, younger voters and the religiously unaffiliated.

There are also wide differences in vote preferences by education: Those with post-graduate degrees are currently the only educational group to favor Democratic candidates for Congress, and they do so by a 19-point margin (58% vs. 39%). And while Democrats hold a 20-point advantage among low-income voters (55% to 35% among voters with family incomes under $30,000), the Republicans lead among middle-income voters ($30,000-$75,000) by 10 points (51% to 41%).

The economy continues to be the top issue for voters, as it has been over the last several election cycles. Today 83% say that the economy will be very important to their vote—in 2010, fully 90% of voters said this. Health care also remains a priority: 77% say it will be very important to their vote, which is identical to the share saying this in August 2010, a few months after the passage of the Affordable Care Act.

Three-quarters of voters (75%) say the issue of terrorism will be very important to their vote, little changed from about the same point in the 2010 campaign (71%). In September 2012, shortly before the presidential election, 60% of voters said terrorism would be very important. (The current survey finds that concerns over Islamic extremism have risen sharply in recent years; it was conducted before President Obama’s Sept. 10 address on expanding U.S. military action against the militant group known as ISIS).

Majorities also view the budget deficit (65%), foreign policy (64%), immigration (62%) and economic inequality (57%) as very important to their vote. Two social issues — gay marriage and birth control — rank lower on the importance list; only about a third of voters say each will be very important to their vote this fall (36% birth control, 32% gay marriage). 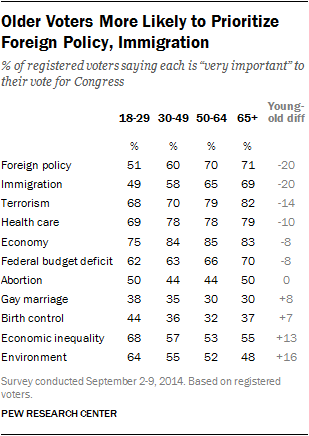 Foreign policy and immigration rate as much more important issues for older voters than younger voters. About seven-in-ten voters 65 and older (71%) view foreign policy as very important to their vote, as do about as many of those 50 to 64 (70%). Among voters younger than 30, only about half (51%) say this.

There also are racial and ethnic differences in views of immigration as a voting issue: 70% of Hispanic voters say immigration is very important, compared with 63% of whites and 46% of blacks.

Young voters are much more likely than older voters to consider the environment when casting their ballots: 64% of 18-29 year old voters say this will be very important to their vote, compared with only about half (51%) of voters 50 and older. 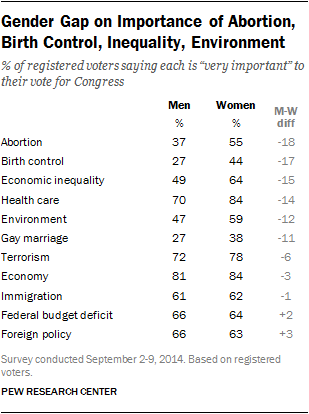 Women are more likely than men to rate several issues as very important, particularly issues of health care and reproduction. For example, while more than half of women voters (55%) say abortion will be very important in their decision this fall, just 37% of men voters say this. And although birth control is not a dominant issue for either men or women, women are much more likely to say it is very important: 44% say this, compared with 27% of men.

Women also are more likely to view economic inequality as an important contributor to their vote choice: 64% say it is very important, compared with 49% of men. 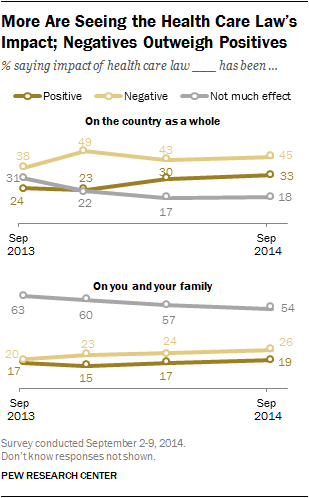 A majority (54%) continues to say the health care law has not had much of an effect on themselves or their families, though somewhat fewer say this than did so a year ago (63%). Currently, about one-in-four (26%) see the health care law’s personal effect as mostly negative, while 19% say it has been mostly positive.

The public also continues to express more negative than positive views about the law’s future impact – both personally and on the country. Currently, 46% say that over the coming years the impact of the law on the country will be mostly negative, 37% anticipate a mostly positive effect and 13% do not think that the law will have much impact going forward. In terms of the law’s future personal impact, 38% expect it will be mostly negative, 27% mostly positive, while a third (33%) say it will not have much of an effect. 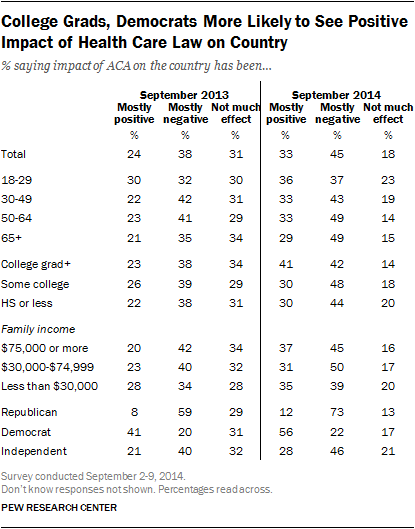 Among many other groups, however, there has been no improvement in opinions about the law’s impact on the country. For instance, those who have only some college experience still view its effects more negatively than positively (48% mostly negative vs. 30% mostly positive) as do those with no more than a high school education (30% vs. 44%).

Familiar Divisions in Views of ACA 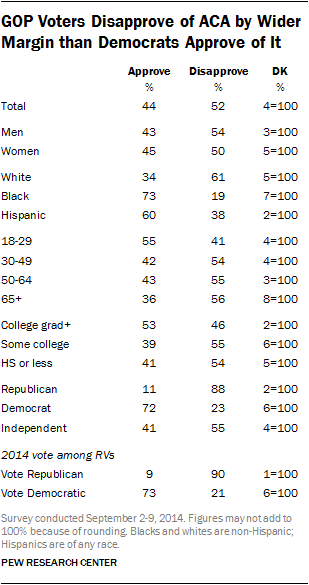 The health care law continues to draw more support from non-whites than from whites, and from more young adults than older people.

Democrats continue to approve of the law by a wide margin (72%-23%), but Republicans oppose it by an even larger margin (88%-11%). These partisan differences carry over into midterm vote preferences: 90% of registered voters who support the Republican in their district disapprove of the health care law, while 73% of those who plan to vote Democratic approve of it.

Wide Partisan Differences Over the Issues That Matter in 2014
Survey ReportIssue Priorities for VotersAge, Gender Differences in PrioritiesACA Remains Unpopular; More See Law’s Impact on CountryFamiliar Divisions in Views of ACA
About the Survey