The Republican Party’s prospects for the midterm elections look much better than they did four years ago at this time, while the Democrats’ look much worse. Voter preferences for the upcoming congressional elections remain closely divided (45% support the Democratic candidate or lean Democratic, while 44% favor the Republican or lean Republican). In polling conducted in August-September 2006, the Democrats held an 11-point advantage (50% to 39%). 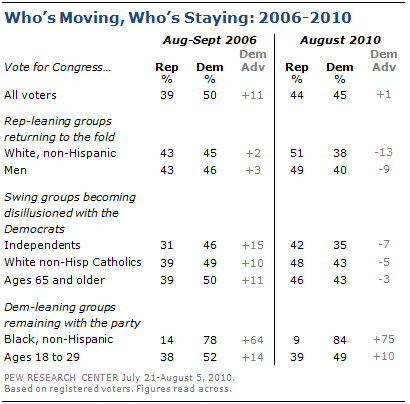 Major shifts in sentiment among key voting blocs account for the improved GOP standing in 2010. The Republicans now enjoy advantages among typically loyal voting blocs that wavered in 2006, notably men and whites.

The Republicans also continue to enjoy an engagement advantage over the Democrats, which at least in part reflects the greater disposition to vote among these voting blocs that have swung their way. In contrast, groups such as young people and African Americans, who continue to support the Democrats by comparable margins as in 2006, are relatively unenthused about voting.

The latest national survey by the Pew Research Center for the People & the Press, conducted July 21-August 5 among 3,003 adults, including 2,431 registered voters, finds that the basic contours of opinion about the midterm election have changed little since the start of the year. In four previous surveys in 2010, preferences among registered voters were also evenly divided. Also as in past surveys, economic issues continue to be most important for voters. At the other end of the spectrum, same-sex marriage ranks last in importance among 13 issues tested in the new poll.

The Vote for Congress

Republicans and Democrats express near-unanimous support for candidates of their own party (93% each), while independents are divided (42% for Republican candidates, vs. 35% for Democratic candidates). 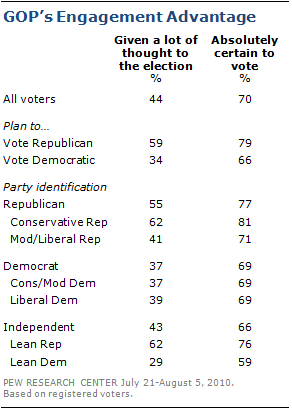 In the current survey, 44% of voters say they have given “quite a lot” of thought to the November election. This is comparable to the level of interest expressed by voters in September 2006 (45%), though it is quite a bit higher than in September 2002, when just 36% said they had given a lot of thought to the upcoming elections. Currently, interest is on par with levels later in the 1994 and 1998 midterm campaigns (44% and 42%, respectively, in early October of those two years). 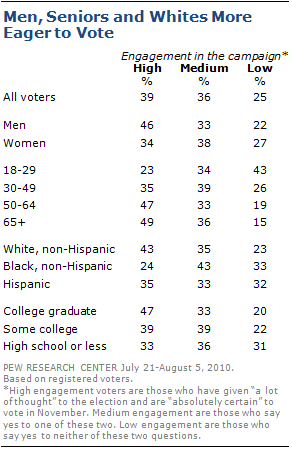 Taking two indicators of engagement together – thought given to the election and intention to vote – it is clear that Republicans and Republican leaning groups are far more energized at this point in the campaign than are Democrats and Democratic groups. Overall, 39% of registered voters are highly engaged: They have given a lot of thought to the campaign and say they definitely will vote. Among voters who identify as Republicans, 50% fall into to this high engagement category. Perhaps equally important, 57% of independents who say they lean to the GOP are rated as highly engaged.

By comparison, Democrats are significantly less engaged. Just 33% of Democrats and 23% of Democratic-leaning independents fall into the high engagement category. Similarly, relatively few among two key demographic groups that supported Democratic candidates in 2006 and 2008, African Americans and young people, rate high on campaign engagement (24% for African Americans, 23% for voters ages 18 to 29).

It is important to keep in mind that interest in the election is not the only factor that motivates voting. Many people vote as a habit, which may be why the overall percentage saying they are “certain to vote” – either absolutely or fairly certain – is more similar between the parties. This survey did not ask about previous voting behavior, which is a usual part of pollsters’ indexes of likely voting.

Much as the Democratic Party attempted to make the 2006 elections a referendum on Republican control of the government, Republican candidates are stressing national issues this year, and Republican voters are more likely than others to say national issues are important. Asked which factor among four would be most important in their vote, a small plurality (36%) of all voters picked national issues, followed by 29% for local or state issues, 22% for candidate character and experience, and just 5% who said the candidate’s political party would be most important. The percentage choosing national issues is higher than in September 2006, when 29% chose this option, and is far larger than in off-year elections from 1994 through 2002.

Among voters who support the GOP candidate in their district, 45% say national issues are most important, compared with 30% among those who say they intend to vote Democratic.

Issue Priorities and the Vote for Congress 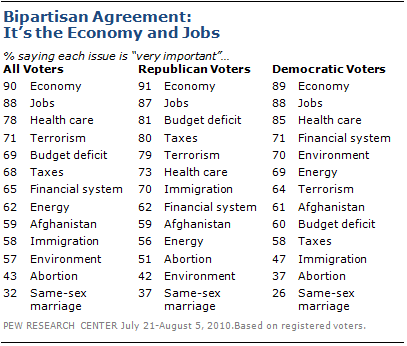 By cont
rast, same-sex marriage ranks at the bottom of the list for both Republican and Democratic voters. Same-sex marriage was recently in the news because of a federal district court judge’s ruling that the California proposition banning gay marriage is unconstitutional.

There are sizable partisan differences in views of the importance of some issues. While about eight-in-ten voters who support Republican candidates see the budget deficit (81%) and taxes (80%) as very important, smaller majorities of Democratic voters say the same (60% budget deficit, 58% taxes). And immigration is rated a very important by substantially more Republican voters (70%) than Democratic voters (47%). 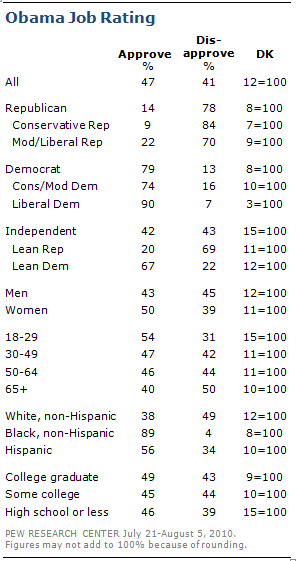 President Obama’s job approval rating stands at 47%, a number that has changed very little all year; 41% currently disapprove of his performance in office.

The stability in Obama’s ratings for the past several months is evident not just among the public overall, but among most subgroups in the population. His core supporters continue to give him high ratings, including Democrats (79% approval) and African Americans (89%). He gets nearly unanimous approval from liberal Democrats (90%).

Even among groups with more mixed opinions, there has been little evidence of a trend for the past several months. Independents remain divided (42% approve, 43% disapprove), while a plurality of whites continue to disapprove (49%, vs. 38% who approve). 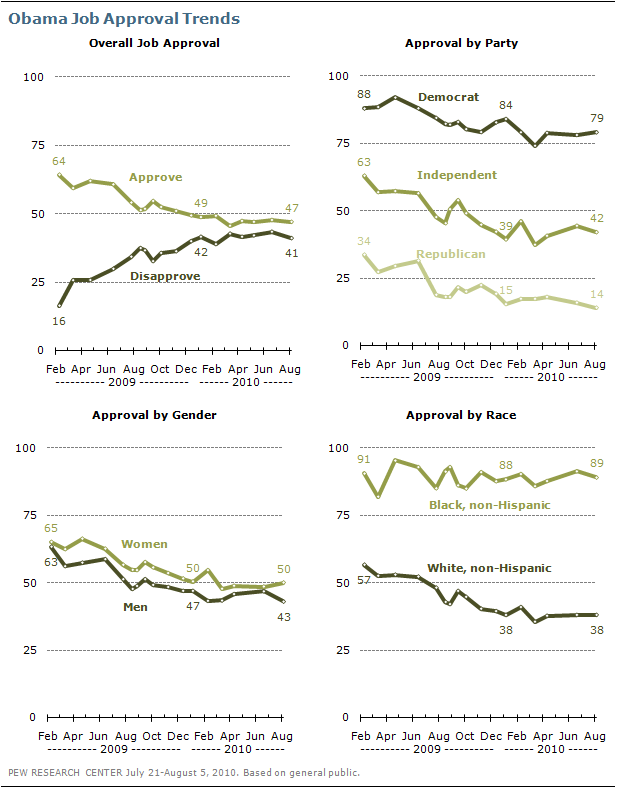 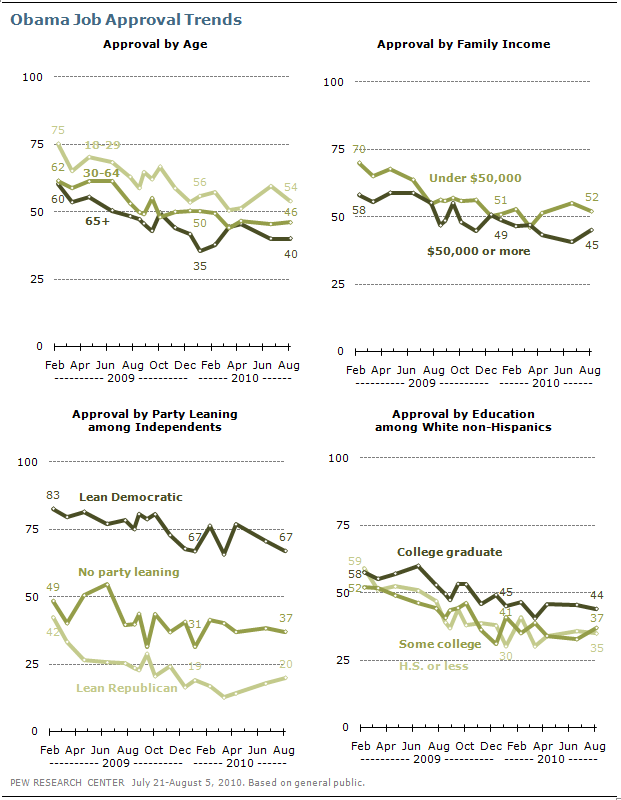 Good is the word that people use most frequently to describe Obama. In a separate survey by the Pew 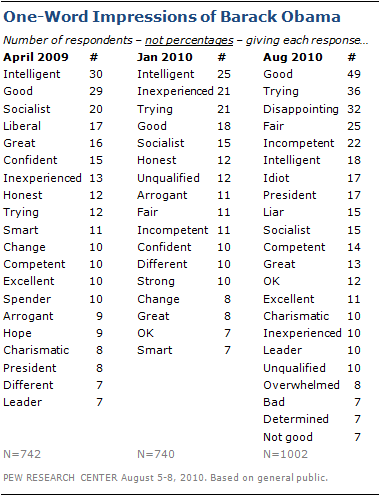 Research Center for the People & the Press, conducted Aug.5-8 among 1,002 adults, 49 say that good is the word that first comes to mind in describing Obama. Other words used frequently are trying (mentioned by 36 respondents) and disappointing (32).

The word good is used more frequently to describe Obama than in previous surveys. In a survey in January, in which 740 respondents were asked to give a one-word description of Obama, 18 mentioned good; in April 2009 (asked of a sample of 742), 29 used that word. Mentions of trying also have increased – from 12 in April 2009 to 21 in January and 36 in the current survey.

Republicans Faring Better with Men, Whites, Independents and Seniors
OverviewThe Vote for CongressWide Partisan Gap in Engagement PersistsIssue Priorities and the Vote for CongressObama Approval StableObama in a Word
About The Survey