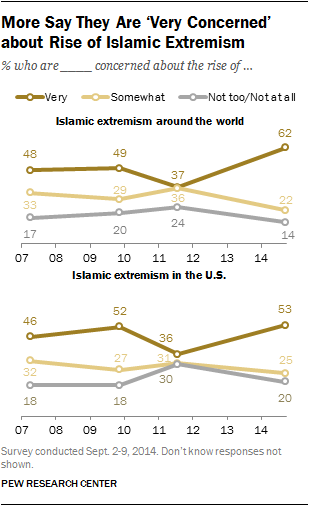 The new national survey by the Pew Research Center, conducted Sept. 2-9 among 2,002 adults, finds that ratings of the government’s job in reducing terrorism have worsened since late last year. Roughly four-in-ten (42%) say the government is doing “not too well” or “not at all well” in reducing the terror threat, up 16 points from November. While the new survey does not ask about ISIS specifically, 67% last month identified the militant group in Iraq and Syria as a “major threat” to the U.S. 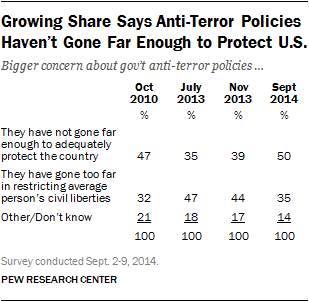 The survey also finds a shifting balance between concerns about civil liberties and protection from terrorism. In a reversal from last year after Edward Snowden’s NSA leaks, 50% today say they are more concerned that government anti-terrorism policies have not gone far enough to protect the country, while 35% are more concerned that the policies have gone too far in restricting civil liberties.

In July 2013, 47% said their greater concern was that government policies had gone too far in restricting civil liberties, while fewer (35%) said their bigger concern was inadequate security. That marked the first time in nearly a decade of Pew Research Center polling that more expressed concern over civil liberties than protection against terrorism. 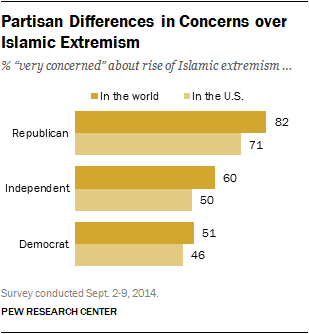 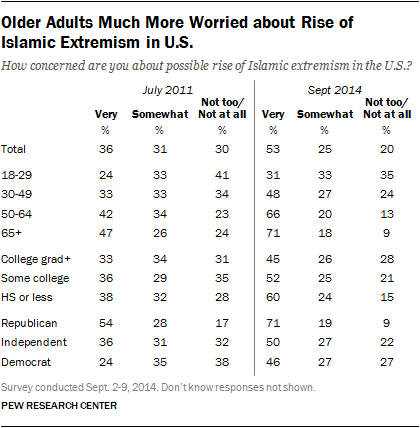 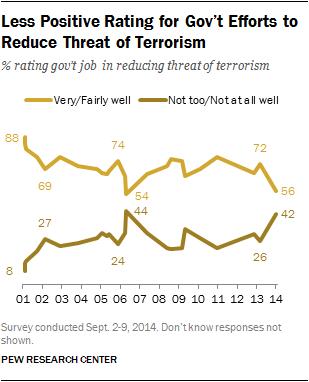 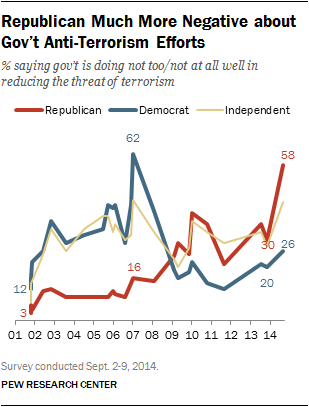 Republican dissatisfaction has nearly doubled since last fall, from 30% then to 58% today saying the government is not doing a good job. Since last year, the share of Democrats saying this has increased only modestly, from 20% to 26%.

During the Obama era, Republicans consistently have given lower marks than Democrats to the government’s anti-terrorism efforts. However, the partisan gap was even greater (and in the opposite direction) late in George W. Bush’s tenure; in 2007, 62% of Democrats rated the government’s job in the reducing terrorism as not good, compared with just 16% of Republicans.

In addition, a growing share of the public expresses concerns that the government’s anti-terrorism policies have not gone far enough to adequately protect the country (50%) rather than going too far in restricting the average person’s civil liberties (35%). 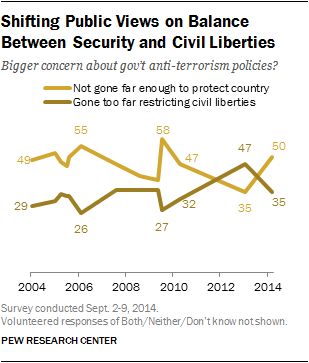 This is a shift from when this question was asked last year after revelations about the NSA’s domestic surveillance program. Pluralities then said they were more concerned that the government had gone too far (47% in July and 44% in November). Today, the balance of opinion is similar to the public’s views in late 2010. 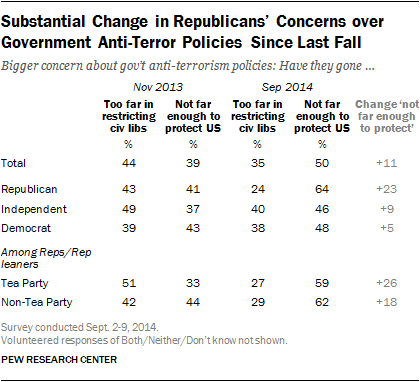 Last November, partisans on both sides were roughly divided on the balance between protection and civil liberties, but that is not the case today. Concerns that anti-terrorism policies haven’t gone far enough have increased 23 points among Republicans to 64%; among Tea Party Republicans, 59% say this, up 26 points.

Meanwhile, there has been no significant Democratic shift (48% today vs. 43% in November). But the party remains internally divided; 46% of liberal Democrats are more concerned about the government going too far in restricting civil liberties, compared with 32% of conservative and moderate Democrats.

Views of Islam and Violence 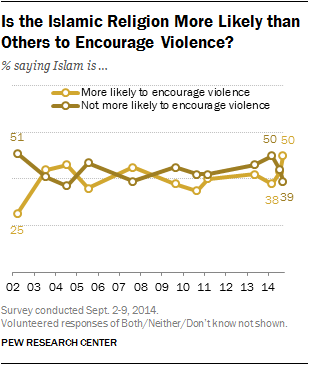 Internally, there are divisions within both parties. Conservative Republicans are 20 points more likely than moderates and liberals to say Islam encourages violence more than others (72% vs. 52%). And more conservative and moderate Democrats say this than do liberal Democrats (46% vs. 35%).

Seven-in-ten white evangelical Protestants say Islam encourages violence more than other religions, the highest percentage of any religious group. Among the religiously unaffiliated, just 35% say Islam is more likely to encourage violence among its believers.