Over the course of her long political career, Hillary Clinton truly has been a comeback kid. On four separate occasions over the past 20 years, Clinton’s favorability ratings have fallen sharply – but each time they recovered. It is rare for a political figure to accomplish that feat once in a career, much less four times.

As Clinton prepares to step down as secretary of state, she is again facing criticism. The State Department has been faulted for failing to address the security needs of the U.S. consulate at Benghazi, Libya, where four officials, including Amb. Chris Stevens, were killed in a terrorist attack in September. Clinton, incapacitated by illness and a concussion, has yet to testify before Congress about the issue. 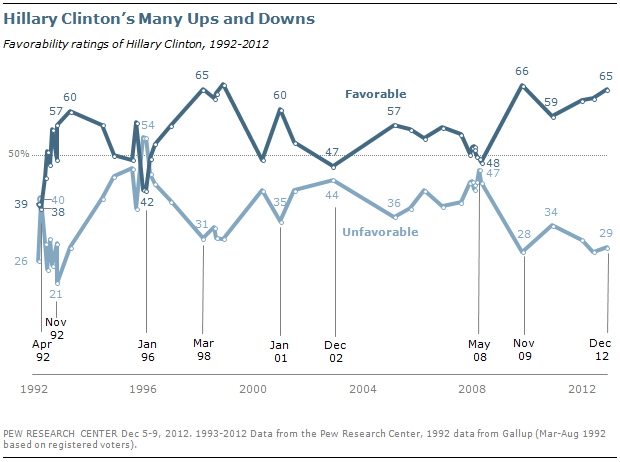 Before the controversy, Clinton’s popularity was approaching an all-time high. In a survey by the Pew Research Center for the People & the Press, conducted Dec. 5-9 among 1,503 adults, 65% had a favorable impression of Clinton while just 29% had an unfavorable view.

Throughout Clinton’s tenure as secretary of state she has enjoyed consistently high favorability ratings – at least 60% or so. But her ratings during the previous 17 years were often quite mixed.

Hillary Clinton first appeared on the national political scene in the spring of 1992, as Bill Clinton was running for the Democratic presidential nomination. In March 1992, when it was clear that her husband had effectively wrapped up the nomination, opinions about Hillary Clinton were mixed: 39% of registered voters had a favorable opinion, 26% viewed her unfavorably, while a significant minority (35%) did not express an opinion, according to a Gallup survey of registered voters. 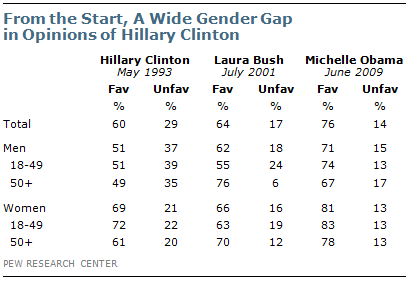 That same month, Clinton became embroiled in the first of many controversies during her political career. In late March 1992, Nightline aired comments Clinton made to reporters where she strongly defended her role as an adviser on health care policy to her husband’s campaign: “I suppose I could have stayed home and baked cookies and had teas, but what I decided to do was fulfill my profession, which I entered before my husband was in public life,” she said.

While Clinton’s comments triggered a broad debate over the role of women in the workplace, they also took a toll on her image. In April 1992, Gallup found that about as many had unfavorable impression (40%) as a favorable opinion (38%) of Clinton. Unfavorable views of Clinton jumped 14 points in the month following her “cookies” remarks, while favorable opinions of her were largely unchanged.

Favorable opinions of Clinton rose through the remainder of the 1992 campaign. In September, 56% viewed her favorably and 25% unfavorably. And in November, a few weeks after Bill Clinton was elected president, 57% had a favorable opinion of Clinton, while 21% had an unfavorable one.

During her initial year as first lady, Clinton was less popular than either of the women who succeeded her – Laura Bush or Michelle Obama. And much of that can be attributed to the fact that Clinton, from her earliest days in the White House, was a polarizing figure among men.

In May 1993, 69% of women – but just 51% of men – expressed a favorable opinion of Hillary Clinton. Clinton also was regarded more highly by younger women than older women. Women younger than 50 viewed Clinton favorably by more than three-to-one (72% to 22%); among older women, the margin was somewhat narrower (61% to 20%).

The gender gap was smaller in opinions about Laura Bush and Michelle Obama at comparable points in their first years. In July 2001, 66% of women and 62% of men viewed Bush favorably. Obama, who had a higher overall rating (76%) in her first year in the White House than either of her predecessors, was viewed favorably by 81% of women and 71% of men in June 2009.

The gender divide in opinions about Hillary Clinton has persisted throughout most of her career. However, in the current survey, her favorable rating is nearly as high among men (62%) as it is among women (68%).

During Bill Clinton’s first term, Hillary Clinton’s tenure was characterized by policy failures and personal scandals. Both took a toll on her favorable ratings. She took on a major policy role in leading a task force aimed at revamping the nation’s health care system. But the effort ended in failure in September 1994. Two months later, Republicans won a House majority for

the first time in four decades.

During this period, Hillary Clinton also was mired in the so-called Whitewater scandal, which began as a failed real estate deal in Arkansas. In January 1996, special prosecutor Kenneth Starr subpoenaed Clinton in a criminal probe into Whitewater – the first time a wife of a sitting president had been subpoenaed.

In both January and February 1996, 54% expressed unfavorable views of Clinton – the highest negative ratings of her career. But as Bill Clinton sailed to an easy reelection victory in 1996, Hillary Clinton’s image again improved. In January 1997, 57% viewed her favorably while 40% did not.

Yet Hillary Clinton remained a polarizing figure. This was reflected in the one-word descriptions used to describe her in a 1996 Pew Research survey. The top positive descriptions of Clinton were “strong,” and “intelligent,” while the most frequently used negative words were “dishonest” and a derogatory term for women that rhymes with rich. 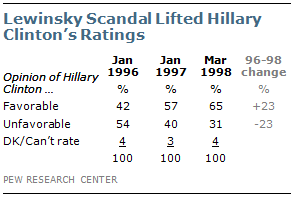 No event had a greater impact on Hillary Clinton’s public image during her years in the White House than the Monica Lewinsky scandal. In the early days of the scandal, as her husband vehemently denied having a sexual relationship with Lewinsky, a White House intern, Hillary Clinton rallied to his defense.

In an interview with Matt Lauer of the Today Show, Hillary Clinton famously ascribed the allegations against the president as a “vast right-wing conspiracy” that had been “conspiring against my husband since the day he announced for president.”

The public rallied behind her: In March 1998, as the Lewinsky scandal raged, 65% expressed a favorable opinion of Hillary Clinton; just 31% viewed her unfavorably. Her favorable ratings remained above 60% through the remainder of 1998, as the House voted to impeach her husband.

Bill Clinton survived the impeachment saga and retained positive approval ratings through the remainder of his presidency. But the public had grown tired of the drama and scandals surrounding the Clinton administration. A new phrase – “Clinton fatigue” – entered the political lexicon. In September 1999, fully 74% agreed with this statement: “I am tired of all the problems associated with the Clinton administration.”

By May 2000, just 49% viewed Hillary Clinton favorably while 42% had an unfavorable impression. Her favorable rating had fallen 17 points since December 1998, shortly before the House voted to impeach Bill Clinton.

Bitter Defeat, Yet Another Comeback

After leaving the White House, Clinton was easily elected as U.S. senator from New York. By 2007, she had set her sights on a bigger prize – the presidency. Clinton began the race as the odds-on favorite for the Democratic nomination. Pew Research Center surveys in 2007 found that she consistently drew 40% or more of the vote among Democrats and Democratic leaners, while her closest rival for the nomination, Sen. Barack Obama polled in the 20s.

What was expected to be a coronation for Clinton quickly turned into a contest. After finishing second in the Iowa caucuses, Clinton upset Obama in the New Hampshire primary – her most memorable election triumph. The early primaries showed that Clinton’s support lagged among men, particularly younger men. Yet she also only ran about even with Obama among women college graduates, while attracting strong support among less educated women.

Her long primary campaign against Obama also took a toll on Clinton’s support among African Americans. For most of her career, her favorable rating among blacks surpassed 70%. In December 2007, shortly before Iowa caucuses, 82% of blacks expressed a favorable opinion of Clinton, compared with just 43% of whites. 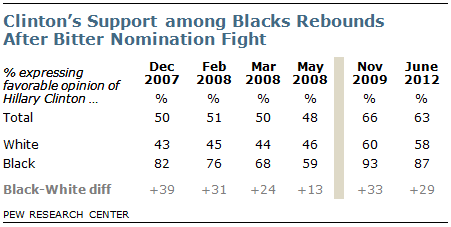 But her favorable ratings among blacks plummeted in the spring of 2008: By May, as Obama secured his hold on the nomination, just 59% of African Americans viewed Clinton favorably.

Obama’s eventual victory, and his appointment of Clinton as his most visible cabinet member, dissipated any lingering bitterness over the nomination fight. A year after the election, a survey by Pew Social and Demographic Trends found that Clinton’s overall favorability mark had surged to 66%, up 18 points from May 2008. And Clinton’s favorability among blacks – 93% — was as high as Obama’s.

Hillary Clinton’s Career of Comebacks
OverviewEarly Years: ‘Cookies’ and ControversySetbacks and Scandals“A Vast Right-Wing Conspiracy”Bitter Defeat, Yet Another Comeback
About the Survey