Like Mitt Romney, Barack Obama was not the highlight of his party’s convention. Among those who watched at least a little coverage of the Democratic convention, 29% say the highlight 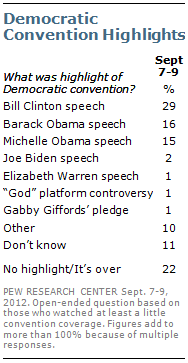 The latest survey by the Pew Research Center for the People & the Press, conducted Sept. 7-9, 2012 among 1,012 adults nationwide, finds that while Obama’s speech was not the highlight of the convention, it is evaluated more positively than Romney’s convention address. Six-in-ten (60%) of those who watched at least a little convention coverage rate Obama’s speech as excellent or good; that compares with 53% of GOP convention watchers who rated Romney’s speech positively.

While Obama’s speech was overshadowed by Clinton’s, Romney shared the spotlight with actor Clint Eastwood. About as many said Eastwood’s speech was the highlight of the GOP convention as mentioned Romney’s speech. (For more, see “RNC Highlights: Romney Shares Top Billing with Eastwood,” Sept. 5, 2012.)

Views of Obama: Before and After 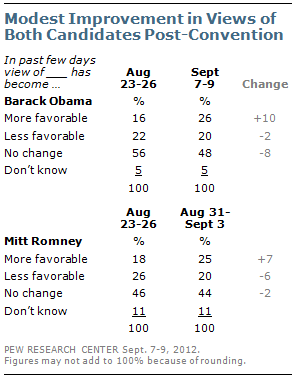 In a survey conducted in late August, prior to the Charlotte convention, 16% said their opinion of Obama had become more favorable recently while 22% said it had become less favorable; 56% said it had not changed.

Recent opinions of Romney showed a similar positive shift after the GOP convention: The percentage saying they had come to have a more favorable view of Romney increased by seven points, from 18% before the Republican convention to 25% after it. 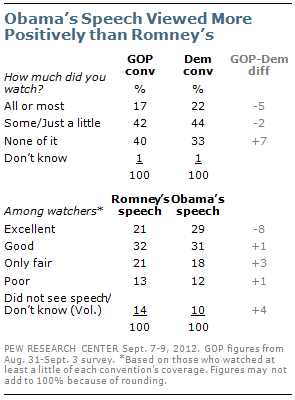 Interest in this year’s Democratic convention is on par with interest in the party’s convention four years ago. In the 2008 post-convention survey, 22% said they watched all or most of the convention, the same percentage as in the current survey. 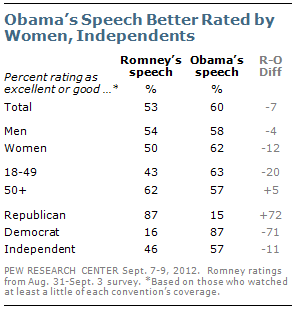 And while partisans overwhelmingly view the speech of their nominee positively, more independents expressed positive opinions about Obama’s speech than Romney’s (57% vs. 46%). 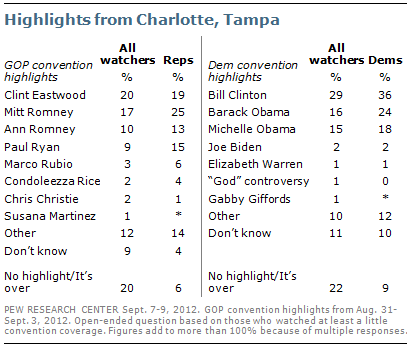