The latest national survey by the Pew Research Center for the People & the Press, conducted Aug. 31-Sept. 3 among 1,008 adults, finds that even among Republicans Romney’s speech was not the standout event of the convention. A quarter of Republican convention-watchers (25%) said Romney’s speech was the highlight, 19% named Eastwood’s performance, 15% named Paul Ryan’s speech and 13% cited Ann Romney’s address.

Four years ago, GOP nominee John McCain’s acceptance speech also was not the convention’s signature event. Fully half (50%) named GOP vice-presidential candidate Sarah Palin’s speech as the highlight of that convention, while 17% cited McCain’s speech, which is identical to the percentage citing Romney’s speech in the current survey.

Views of Romney: Before and After 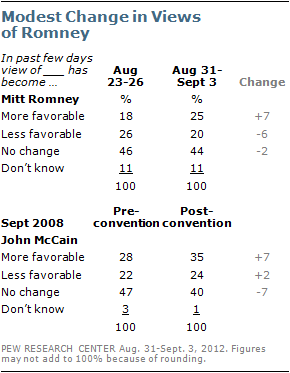 Currently, 25% say their opinion of Romney has become more favorable in the past few days, up from 18% during the week before the GOP convention (Aug. 23-26). There has been a comparable decline in the percentage saying their views have become less favorable (from 26% to 20%). Still, a plurality says their opinion of Romney has not changed recently (44% today, 46% before the convention).

There was a similar change in views of McCain after the 2008 Republican convention: 35% said they felt more favorably toward the GOP nominee, up from 28% before the convention.

As was the case with McCain, most of the change in Romney’s image has come among Republicans: In the 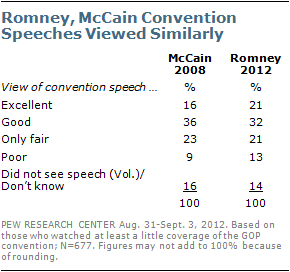 Fewer Watch Coverage than in 2008 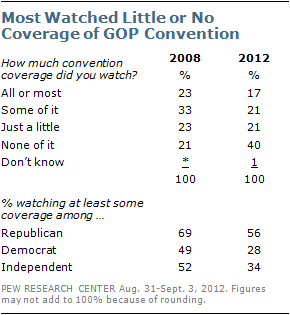 More generally, 29% of Americans say they are following news about the presidential campaign very closely, which is virtually unchanged from last week.

RNC Highlights: Romney Shares Top Billing With Eastwood
OverviewViews of Romney: Before and AfterFewer Watch Coverage than in 2008
About the Survey