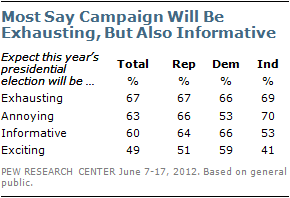 The national survey by the Pew Research Center for the People & the Press, conducted June 7-17 among 2,013 adults, finds that just 49% expect the election to be exciting. Nearly six-in-ten Democrats (59%) say the election will be exciting, compared with 51% of Republicans and just 41% of independents. 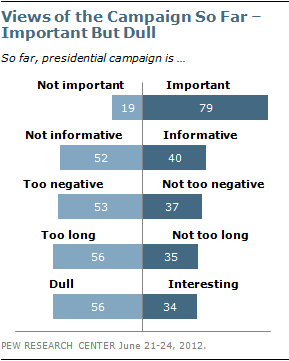 The expectation that the election will be exhausting is in line with perceptions of the campaign so far. Most Americans say the campaign has been too long and dull (56% each), while 53% say it has been too negative. At the same time, an overwhelming majority (79%) views the presidential campaign as important. 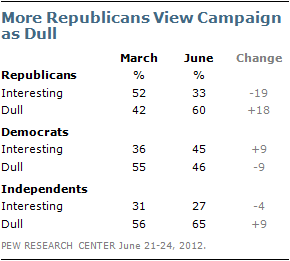 While fewer Republicans than Democrats currently say the campaign has been interesting, GOP voters are more engaged than Democratic voters in the 2012 campaign. For instance, more Republicans are giving quite a lot of thought to the election and more say it really matters who wins. (For more see “GOP Holds Early Turnout Edge, But Little Enthusiasm for Romney,” June 21, 2012.)

Views of Campaigns: Present and Past 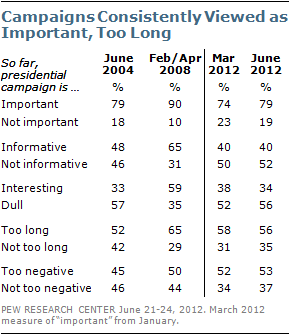 The public has long expressed the view that presidential campaigns are too long. In surveys conducted over the past three campaigns, asked at different stages in race, no fewer than 50% have said campaigns were too long.

The 2008 campaign was viewed more positively in several respects. In surveys conducted between February and October of that election year, majorities consistently said it was informative, compared with just 40% who say that about the 2012 campaign today. The share who 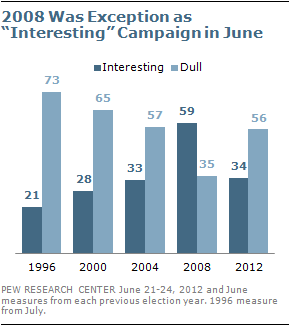 But 2008 was the exception on many of these measures. Opinions about the 2012 presidential campaign today are fairly similar to the public’s views in June 2004. At that time, 79% said the campaign was important (the same percentage as today), 52% said it was too long (59% today) and just 33% said it was interesting (34% today). 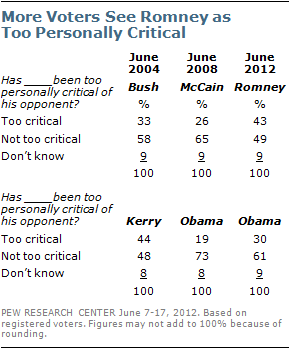 More voters say that both presidential candidates have been too personally critical of each other than did so at this point in the 2008 campaign.

Currently, 43% of registered voters say Mitt Romney has been too personally critical of Barack Obama, while 49% say he has not. Three-in-ten voters (30%) say Obama has been too critical of Romney, while about twice as many (61%) disagree.

In June 2008, just 26% of voters said John McCain was too personally critical of Obama, while even fewer (19%) said Obama was too critical of McCain.

Perceptions today are similar to the last time an incumbent was running for reelection. In June 2004, 44% of voters said John Kerry was too personally critical of George W. Bush, about the same as the percentage saying that about Romney today. And 33% said the Bush was being too critical of Kerry, similar to the 30% that say that about Obama today. 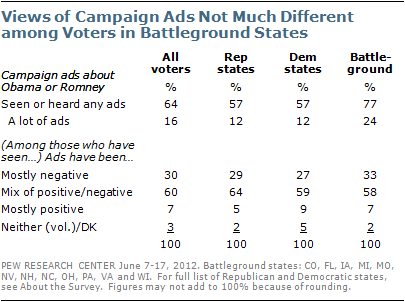 With more than four months to go until Election Day, most voters (64%) say they have already seen or heard commercials about Romney and/or Obama. But just 16% say they have seen a lot of campaign ads at this early point in the race.

Partisans Agree: Presidential Election Will Be Exhausting
OverviewViews of Campaigns: Present and PastRomney Viewed as More Personally CriticalCampaign Ads Seen as Mix of Positive, Negative
About the Surveys