The United States continues to be a highly religious nation. Most Americans say they belong to a particular faith and large percentages agree with statements about key religious beliefs and behaviors.

About three-quarters of the public (76%) say prayer is an important part of their daily life, while an identical percentage agrees that “we will all be called before God at the Judgment Day to answer for our sins.” And eight-in-ten say they never doubt the existence of God.

Nonetheless, there are some demographic and partisan differences over religious values. In the current survey, 68% of Millennials say they never doubt the existence of God, a decline of 15 points since 2007. Over this period, the proportion of older age cohorts expressing firm belief in God has remained stable. 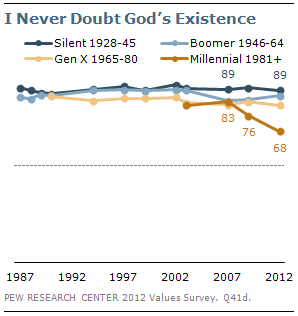 As a result, the gap between the oldest Americans—the Silent generation – and the youngest, which was just six points in 2007, has increased to 21 points today (89% of Silent generation vs. 68% of Millennials)

There have been smaller declines in the percentages of Millennials agreeing to the other two statements about core religious beliefs – the personal importance of prayer and belief in a Judgment Day.

The partisan gap over the three religious values questions, while substantial, has not increased much in recent years. Currently, 81% of Republicans agree with all three religious values statements, compared with 62% of Democrats and 61% of independents. In the 2007 study, there was a similar gap. In the first political values survey in 1987, however, there were only modest differences in the percentages of Republicans (71%), Democrats (69%) and independents (64%) who agreed with all of these statements. 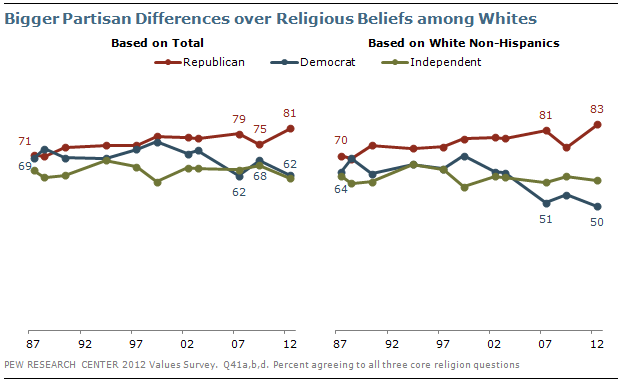 The gap between Republicans and Democrats increases dramatically when only white non-Hispanics are considered. African Americans, who make up about a quarter of all Democrats, are more likely than whites to hold more traditional religious values (82% of non-Hispanic blacks agree with all three statements vs. 65% of whites.)

Just half (50%) of white non-Hispanic Democrats agree that prayer is personally very important, never doubt God’s existence and express belief in a Judgment Day. That compares with 60% of white independents and 83% of white Republicans. 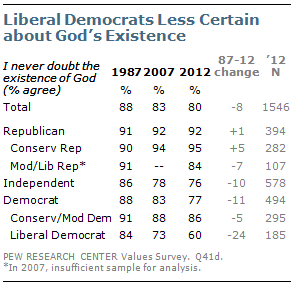 Among white conservative and moderate Democrats, 82% agree that they never doubt God’s existence; 17% disagree. Among white liberal Democrats, about as many agree (49%) as disagree (48%). 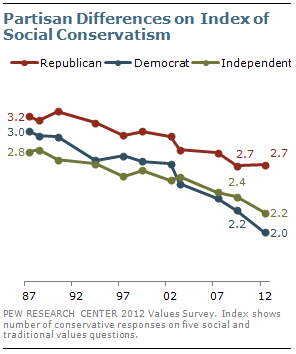 While the overall shifts in religious values have been modest, there has been a more clear downward trend over time in the level of conservative views on many social values.

There have been declines in the overall percentages saying that school boards should be able to fire homosexual teachers, they have “old-fashioned” family values, women should return to their traditional roles and books with “dangerous ideas” should be banned from public school libraries. However, nearly as many say there are clear guidelines about good and evil as did so in the 1987 (76% today, 79% then). 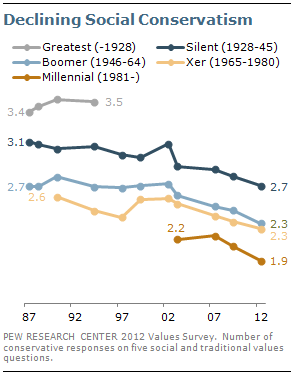 The average number of conservative responses on an index of five social values questions has dropped from 3.0 in 1987 to 2.3 this year. The index has ticked down in most of the values survey since 1999.

The issue of whether school boards should be able to fire homosexual teachers was divisive in the early political values surveys. At that time 51% agreed that “school boards ought to have the right to fire teachers who are known homosexuals,” while 42% disagreed.

But for more than 20 years, majorities have disagreed with this statement. In the last five years alone, the percentage saying school boards should not have the right to fire openly gay teachers has increased from 66% to 75%.

In recent years, the public also has become much more supportive of rights of gays and lesbians to marry legally.
(For more, see: More Support for Gun Rights, Gay Marriage than in 2008 or 2004.)

There also has been change in opinions about “old-fashioned” family values. In the first political values survey, 87% agreed they have “old-fashioned values about family and marriage.” By 2007, 76% agreed with this statement and in the current survey 71% agree.

There has been less change in opinions about whether “there are clear guidelines about what’s good and evil that apply to everyone regardless of their situation.” Nearly eight-in-ten (79%) agreed with this statement in 1987; 76% agree today.

There have been major changes within age cohorts, including the Silent generation, in opinions about whether school boards should be able to fire openly gay teachers. In 1987, a 55% majority of Silents (born 1928-1945) said school boards should have the right to fire openly homosexual teachers. By 2007, just 44% agreed. Since 2007, there has been a further 14-point decline in agreement (to 30%). 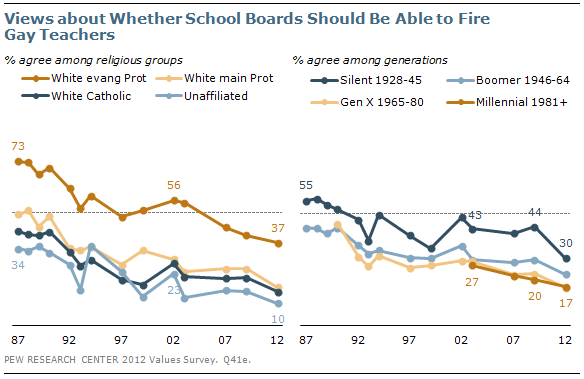 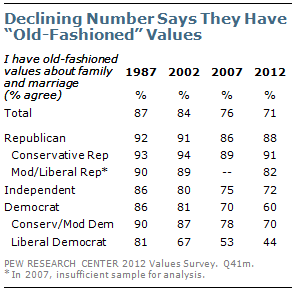 Since 1987, there have been declines in the percentages of independents and Democrats who say they have “old-fashioned” family values. But Republicans’ views are largely unchanged. 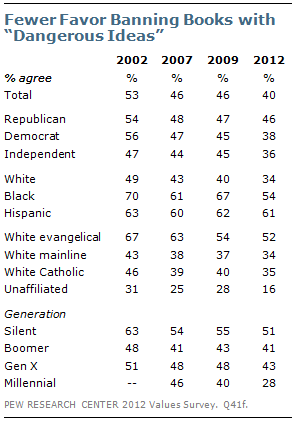 Over the past decade, agreement with this statement has declined across political and demographic groups. Currently, 46% of Republicans say books with dangerous ideas should be banned, down from 54% in 2002. There also have been declines among Democrats (from 56% to 38%) and independents (47% to 36%).

In 2007, 46% of Millennials agreed that books with dangerous ideas should not be permitted in school libraries, as did 54% in the Silent generation. Since then, however, the percentage of Millennials expressing this view has fallen 18 points (to 28%), while Silents’ opinions have shown little change. As a result, the generational divide has increased considerably.

Next: Section 7: Values About Foreign Policy and Terrorism
← Prev Page
Page1Page2Page3Page4Page5Page6You are reading page7Page8Page9Page10Page11
Next Page →