For two decades, the public has consistently favored focusing more attention on domestic problems, and less on overseas concerns. At the same time, it has expressed robust support for an active approach to world affairs.

The new survey finds most Americans continuing to hold both points of view. But the number saying the U.S. should concentrate more on problems at home has risen modestly, while support for an active role in world affairs has slipped.

Currently, 83% agree that “we should pay less attention to problems overseas and concentrate on problems here at home.” That is up 10 points since 2002, shortly after the 9/11 attacks, and the highest percentage expressing this view since 1994.

Meanwhile, the number agreeing that “it’s best for the future of our country to be active in world affairs” has fallen from 90% to 83% since 2009, while the percentage disagreeing has doubled, from 7% to 14%.

Notably there are only slight partisan differences over these attitudes. However, the partisan divide over the Reagan-era principle of “peace through strength” remains about as wide as it has been over the past decade. Republicans continue to say that the best way to ensure peace is through military strength, while most Democrats disagree. 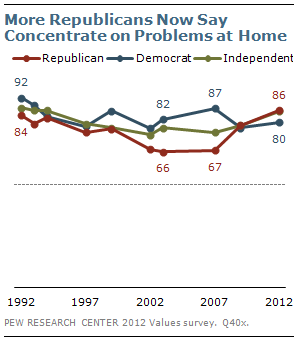 Republican support for focusing greater attention on problems at home has risen sharply since George W. Bush left office. Between 2007 and 2009, the percentage of Republicans favoring more of domestic focus increased 12 points (from 67% to 79%). In the current survey it has risen to 86%, as high as it has ever been in a political values survey.

The share of Republicans that completely agrees that more attention should be focused on domestic problems also has increased sharply. Currently, 42% completely agree, up 15 points from three years ago. The proportion of Democrats who completely agree is virtually unchanged (42% today, 41% then).

Nonetheless, there remains widespread support across partisan lines for remaining active in world affairs: 88% of Democrats and 86% of Republicans say it is best for the country’s future to be active in world affairs, which is little changed from recent years. However, since 2009, the percentage of independents expressing this view has fallen by 10 points from 90% to 80%. 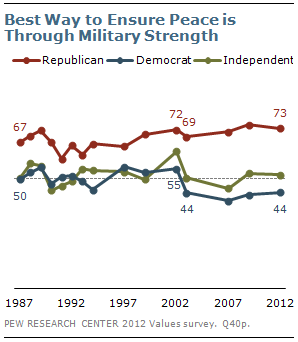 Since the time of the first political values survey, during Ronald Reagan’s second term, there have been sizable partisan differences over whether the best way to ensure peace is through military strength. But those differences increased sharply in 2003, during the Iraq war, and have remained as wide ever since.

In the current survey, 73% of Republicans say the best way to ensure peace is through military strength, compared with 52% of independents and just 44% of Democrats.

Republicans’ views on this measure have changed little since 2002. But between 2002 and 2003, there were sharp declines in the percentages of Democrats and independents who said that peace is best ensured through military strength. The share of both groups that express this view has changed little since 2003. And the partisan gap in opinions about peace through strength remains about as large today as it was then (29 points now, 25 points in 2003).

Democrats have long been divided ideologically in opinions about peace through strength. In the current survey, 55% of conservative and moderate Democrats say peace is best ensured through military strength, compared with just 30% of liberal Democrats.

Most Say Countries Helped by U.S. Are Resentful

Nearly two-thirds of the public (64%) agrees that “most of the countries that have gotten help from America end up resenting us.” That is little changed from recent years, but there also are increased partisan differences in these views.

Currently, about seven-in-ten Republicans (69%) and independents (68%) agree that others resent the U.S. after receiving assistance, compared with 56% of Democrats. The proportion of Democrats expressing this view has fallen 10 points since 2009, while changing little among independents and Republicans.

The survey finds that fewer half of Americans (43%) say that “we should get even with any country that tries to take advantage of the United States.” Support for this idea reached 61% in 2002, shortly after the 9/11 terror attacks, but fell to 48% the following year and has remained below 50% since then.

Partisan differences in these attitudes are relatively modest: Fewer than half of Republicans (46%), Democrats (41%) and independents (45%) say the U.S. should get even with countries attempting to take advantage. 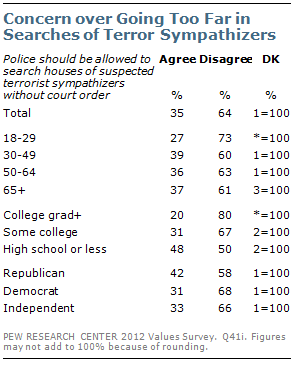 The public continues to harbor reservations about suspending some civil liberties in the fight against terrorism. Nearly two-thirds of Americans (64%) say the police should not be allowed to search houses of those who might be sympathetic to terrorists without a court order. These attitudes have changed little since 2003.

This is a rare issue on which there are larger educational differences than partisan divisions. Fully 80% of college graduates say that the police should not be allowed to conduct searches of possible terrorist sympathizers without a court order. By contrast, half (50%) of those with no more than a high school education say police should be allowed to do this. Majorities of Democrats (68%), independents (66%) and Republicans (58%) say the police should not be able to carry out such searches without a court order. 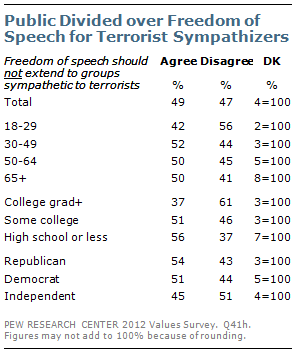 The public is more evenly divided over whether freedom of speech should extend to groups sympathetic to terrorists: 49% say it should not, while 47% disagree. There also are large educational differences over this issue. A majority of those with no more than a high school education (56%) say freedom of speech should not extend to groups sympathetic to terrorists. Most college graduates (61%) disagree.

There are larger differences in opinions among Democrats than between Democrats and Republicans. A majority of conservative and moderate Democrats (58%) say freedom of speech should not extend to groups sympathetic to terrorists; most liberal Democrats (57%) disagree.

Fight for U.S., Right or Wrong?

About half of the public (51%) says that “we all should be willing to fight for our country, whether it is right or wrong,” 43% disagree. Opinions on this measure have fluctuated only modestly over the past 25 years. In the first political values survey in 1987, 54% said people should be willing to fight for this country, right or wrong, while 40% disagreed.

Next: Section 8: Values About Immigration and Race
← Prev Page
Page1Page2Page3Page4Page5Page6Page7You are reading page8Page9Page10Page11
Next Page →

The 2004 Political Landscape
Trump Gets Negative Ratings for Many Personal Traits, but Most Say He Stands Up for His Beliefs
The Partisan Divide on Political Values Grows Even Wider
Defining generations: Where Millennials end and Generation Z begins
Growing Share of Americans Say They Plan To Get a COVID-19 Vaccine – or Already Have
Quiz: Are you a Core Conservative? A Solid Liberal? Or somewhere in between?
Most Americans Support Tough Stance Toward China on Human Rights, Economic Issues
In their own words: What Americans think about China