The values project draws on a series of large national surveys conducted since 1987. The project was initiated by the Times Mirror Center for the People & the Press in 1987 and continued by the Pew Research Center for the People & the Press since 1996. Over this period, 15 surveys have been conducted with a total of 35,578 interviews. In the 2012 survey, interviews included 79 questions about political and social values, plus questions about current issues and political figures. Surveys since 2003 include interviews conducted in English and Spanish. 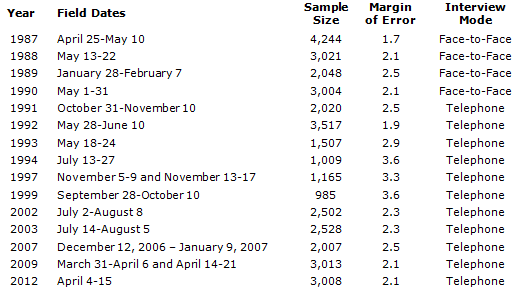 Results for the 2012 values survey are based on telephone interviews conducted April 4-15, 2012, among a national sample of 3,008 adults, 18 years of age or older, living in all 50 U.S. states and the District of Columbia (1,805 respondents were interviewed on a landline telephone, and 1,203 were interviewed on a cell phone, including 603 who had no landline telephone). The survey was conducted by interviewers at Princeton Data Source under the direction of Princeton Survey Research Associates International.

The following table shows the error attributable to sampling that would be expected at the 95% level of confidence for different groups in the 2012 survey: 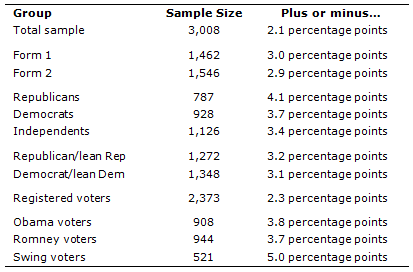 Sample sizes and sampling error for other subgroups are available upon request. In addition to sampling error, one should bear in mind that question wording and practical difficulties in conducting surveys can introduce error or bias into the findings of opinion polls.

Figures in this report may not add to 100% due to rounding. Whites and blacks are non-Hispanic; Hispanics may be of any race.

Unlike a landline phone, a cell phone is assumed in Pew Research polls to be a personal device. Interviewers ask if the person who answers the cell phone is 18 years of age or older to determine if the person is eligible to complete the survey. This means that, for those in the cell sample, no effort is made to give other household members a chance to be interviewed. Although some people share cell phones, it is still uncertain whether the benefits of sampling among the users of a shared cell phone outweigh the disadvantages.

Interviewing was conducted at Princeton Data Source under the direction of Princeton Survey Research Associates International. Interviews were conducted in English and Spanish. A minimum of 7 attempts were made to complete an interview at every sampled landline and cell phone number. Calls were staggered over times of day and days of the week (including at least one daytime call) to maximize the chances of making contact with a potential respondent. Interviewing was also spread as evenly as possible across the field period. An effort was made to recontact most interview breakoffs and refusals to attempt to convert them to completed interviews. People reached on cell phones were offered $5 compensation for the minutes used to complete the survey on their cell phone.

The sample is then weighted to population parameters using an iterative technique that matches gender, age, education, race, Hispanic origin and nativity, region, population density and telephone status and usage. The population parameters for age, education, race/ethnicity, and region are from the Current Population Survey’s March 2011 Annual Social and Economic Supplement and the parameter for population density is from the Decennial Census. The parameter for telephone status and relative usage (of landline phone to cell phone for those with both) is based on extrapolations from the 2011 National Health Interview Survey. The specific weighting parameters are: gender by age, gender by education, age by education, race/ethnicity (including Hispanic origin and nativity), region, density and telephone status and usage; non-Hispanic whites are also balanced on age, education and region. The weighting procedure simultaneously balances the distributions of all weighting parameters at once. The final weights are trimmed to prevent individual cases from having too much influence on the final results.

Weighting cannot eliminate every source of nonresponse bias. Nonetheless, properly-conducted public opinion polls have a good record in achieving unbiased samples. In particular, election polling – where a comparison of the polls with the actual election results provides an opportunity to validate the survey results – has been very accurate over the years.

Sampling error results from collecting data from some, rather than all, members of the population. The 2012 survey of 3,008 adults had a margin of error of plus or minus 2.1 percentage points with a 95% confidence interval. This means that in 95 out of every 100 samples of the same size and type, the results we obtain would vary by no more than plus or minus 2.1 percentage points from the result we would get if we could interview every member of the population. Thus, the chances are very high (95 out of 100) that any sample we draw will be within 2.1 points of the true population value. The margins of error reported and statistical tests of significance are adjusted to account for the survey’s design effect, a measure of how much efficiency is lost in the sample design and weighting procedures when compared with a simple random sample.

ABOUT THE PARTY IDENTIFICATION DATABASE

The analysis of changes in party identification over time is based on a compilation of 276 surveys and almost 450,000 interviews among the general public conducted by the Pew Research Center from January 1990 to April 2012. These surveys are combined into one large data file that can be sorted according to a range of demographic characteristics, with comparisons made across different time periods. Yearly totals are calculated by combining all surveys for the calendar year, with appropriate weights applied. The table below shows the number of surveys and interviews conducted each year as well as the margin of error for each yearly sample. 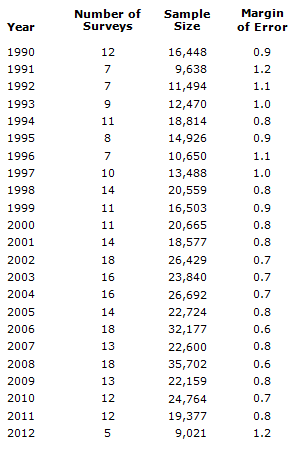