Much has changed over the past 25 years – internationally, domestically and technologically. But through this period, the public’s core values have remained relatively stable. The way 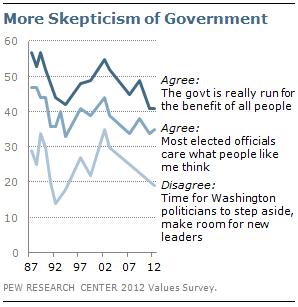 that the public thinks about poverty, opportunity, business, unions, religion, civic duty, foreign affairs and many other subjects is, to a large extent, the same today as in 1987. On most of the questions asked in both 1987 and 2012, the number agreeing is within five percentage points of the number who agreed 25 years ago. And on almost none has the basic balance of opinion tipped from agree to disagree or vice-versa.

The exceptions to this pattern of stability have occurred almost exclusively in two areas: views of government and social values. Public assessments of the federal government’s role and performance have fluctuated over the past 25 years, but are currently at a low point on 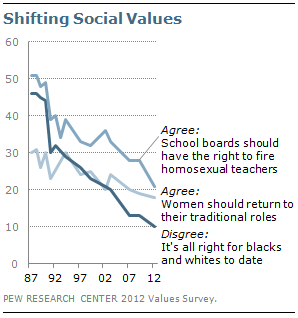 most measures. And public views about race, homosexuality, gender and family have undergone an even more fundamental shift since 1987.

While important, the changes in these two realms are the exceptions, however. More common are the consistent majorities who believe that the strength of the country is mostly based on the success of American business, who believe that as Americans we can always find a way to solve our problems, and who believe that hard work can lead to success for anyone. Similarly, for 25 years 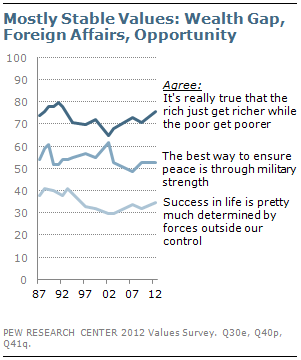 most have consistently held the view that the government has a responsibility to care for people who can’t take care of themselves, that
labor unions are necessary to protect the working person, and that it’s really true that the rich just get richer while the poor get poorer. Despite the inherent tension in many of these values, the relative stability over this tumultuous period suggests that the core principles and beliefs of the nation are robust.

This relative stability in the overall balance of values does not mean the nation has not undergone a fundamental transformation, however. As discussed in the overview of this report, the defining change in American politics over the past quarter-century is not in overall public beliefs, but how these beliefs are increasingly being sorted along partisan lines. Today, the partisan bases are more 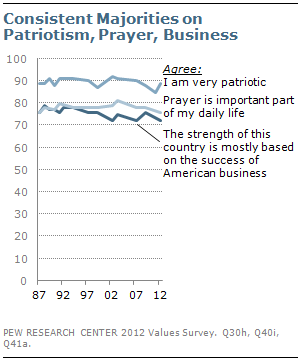 homogeneous and less cross-pressured, and hold more consistently liberal or conservative views across a wider spectrum of values.

This polarization along partisan lines stands in contrast to other social divides such as race, ethnicity, gender, class and religion, all of which remain significant factors, but which have neither grown nor receded in importance.

To mark the 25 year anniversary of the Pew Research Center’s American Values study, we have developed an interactive database of the full history of these studies. The website allows you to go beyond the surface to study change and stability within political and demographic subgroups.

In 1987, midway through Ronald Reagan’s second term in office, party was one among many fundamental cleavages in American society. Republicans and Democrats held different values, but the differences were on par with the differences of opinion between blacks and whites, wealthy and poor, or college grads and those without a college degree. 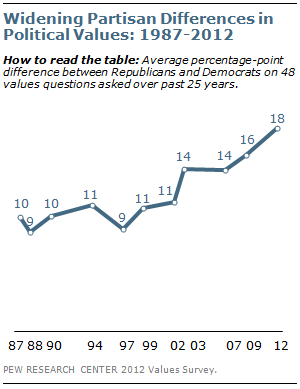 This is no longer the case. Since 1987 – and particularly over just the past decade – the country has experienced a stark increase in partisan polarization. Across 48 different questions covering values about government, foreign policy, social and economic issues and other realms, the average difference between the opinions of Republicans and Democrats now stands at 18 percentage points. This is nearly twice the size of the gap in surveys conducted from 1987-2002.

The growing divide between Democrats and Republicans spans a wide range of beliefs, with record-wide gaps for many value dimensions Pew Research has tracked over the past 20 to 25 years. In most cases, this represents a widening of already existing partisan differences – particularly when it comes to the role of government. For example, Democrats have always been more committed than Republicans to government responsibilities in providing a social safety net and actively addressing inequality in the nation. But in both of those areas, the divide between Democratic and Republican values has nearly doubled over the past quarter century.

Views on the importance of environmental protection have arguably been the most pointed area of polarization. When these questions were first asked 20 years ago, there was virtually no disagreement across party lines. Even as recently as 2003, Republicans and Democrats were, on average, only 13 points apart on questions related to the environment. That gap has now tripled to an average of 39 points – one of the largest 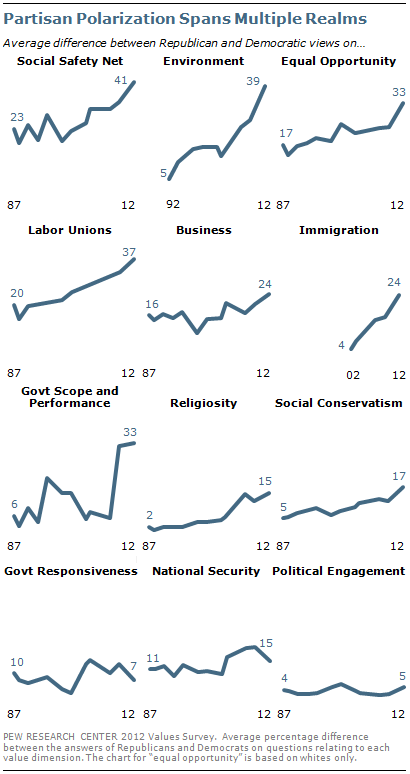 values gaps in the study.

Religion and social conservatism have also arisen as new partisan divides over this period. When the project was first started in 1987, Democrats and Republicans were equally likely to express strong religious faith, cite the importance of daily prayer and express unwavering faith in God. While broad majorities in both parties continue to hold these views, the share of Democrats who do not has grown substantially.

Views on immigration have also become partisan, when they were not before. When these items were first asked 10 years ago, there was little difference in how Democrats and Republicans thought about the impact of immigrants and the need to reduce immigration. But that four-point average difference has increased to 24 points in the current survey.

Polarization has not increased in all areas, however. While there are partisan differences over national security, these are not much larger than they were 25 years ago. And there is no greater gap between Republicans and Democrats today in terms of their impression about how well the electoral process works, how responsive elected officials are, and the importance they place on civic engagement and voting.

Why the Gaps Have Grown 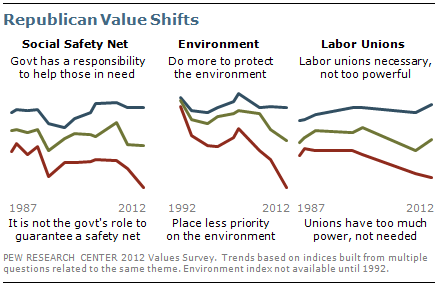 Responsibility for the growing divide between Republicans and Democrats cannot be attributed solely to a shift in the values of one or the other party.

In some realms, Republicans today clearly take a more conservative position, while Democratic values have remained relatively constant. This is most apparent when it comes to environmental protection. Republicans also have grown far less committed to the social safety net in their responses to questions about whether the government has a responsibility to care of those unable to care for themselves and provide basic food and shelter for the needy. And views of the role of labor unions have also become more polarized due mostly to shifting Republican views on unions as Democratic support has remained more stable.

But in other realms, the values of Democrats have shifted while Republicans have held steady. Most notably, there has been a decided secular trend among Democrats in recent years. From 1987 through the end of the 1990s Republicans and Democrats expressed roughly equal levels of religious commitment. But since then, Republican commitment has held steady, while a declining majority of Democrats hold traditional religious views. The trend away from religion has become substantial among liberal Democrats in particular. 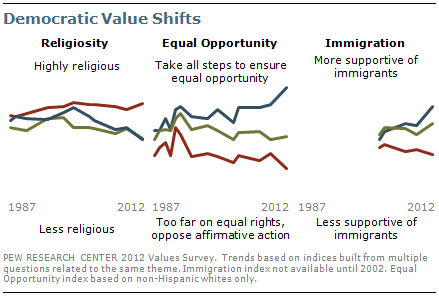 Democratic support for equal opportunity – the sense that the government should do more to ensure equal opportunity for blacks and minorities – has also risen substantially in recent years. And similarly, Democrats have become increasingly favorable toward immigration and view the impact of immigrants on America more positively. In both of these realms, this shift is not only due to the Democratic Party’s increasingly diverse demographics; even among white Democrats, support for equal rights and immigrants has grown. 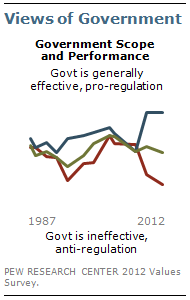 Historically, views on government effectiveness have changed with administrations. When Ronald Reagan, George H.W. Bush and George W. Bush were in office, Republican skepticism and concern about government was far less intense. And by the latter part of the most recent Bush presidency, Democratic concerns about government had increased.

But the Obama presidency has witnessed the most extreme partisan reaction to government in the past 25 years. Republicans are more negative toward government than at any previous point, while Democrats feel far more positively.

The increasing divergence between Republicans and Democrats coincides with the shrinking of the partisan bases. So far in 2012, a 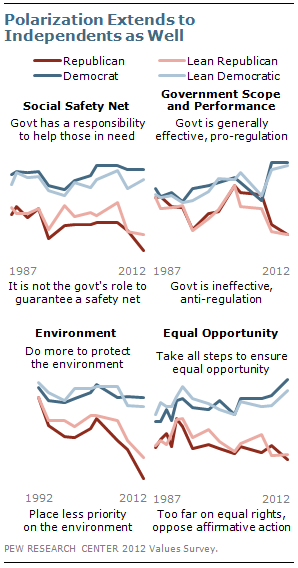 Yet political polarization is not limited to the narrowed partisan bases. Even independents who say they only lean toward one or the other party have grown further apart in their values and beliefs. On most of the core attitudes about the role and effectiveness of government, the values of these partisan leaners track very closely with those of partisans; this is true on other value dimensions as well, such as views of business, labor unions, national security, immigration and social conservatism. 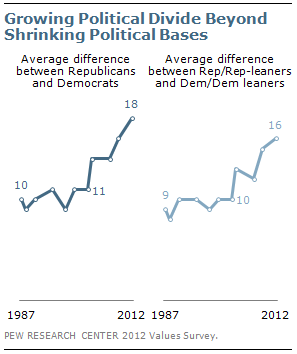 Overall, a growing number of Americans – including both partisan and many independents – are expressing consistently liberal or consistently conservative views across a wider range of political values than at any previous point in the past quarter century.

The Partisan Divide on Political Values Grows Even Wider
The 2004 Political Landscape
Trump Gets Negative Ratings for Many Personal Traits, but Most Say He Stands Up for His Beliefs