As the 112th Congress approaches the 100-day mark, most say Republicans in the House of Representatives are not keeping their campaign promises and fewer than half say they are happy the Republicans won control of the House in last November’s election.

Just a third (33%) say that that Republicans in the House are keeping the promises they made during the campaign, while 52% say they are not. Compared with other recent changes in power on Capitol Hill, House Republicans receive lower marks for delivering on campaign promises than did Democrats in 2007 and Republicans in 1995– though, in both 2007 and 1995 the party in power controlled both the House and Senate. 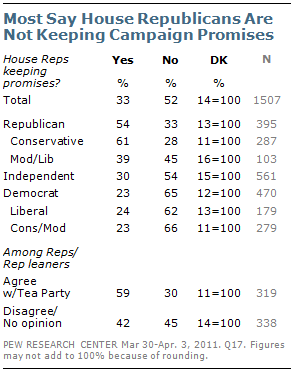 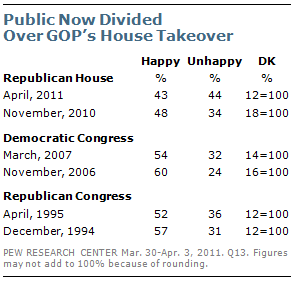 In the new survey, the public is divided in reactions to the GOP’s victory in November; 43% say they are happy the Republican Party won control of the House while about the same percentage (44%) expresses unhappiness.

This follows a pattern from the Democratic congressional victory four years ago and the GOP’s big win in 1995: Public reactions to those power shifts were also somewhat less positive at about the 100-day mark than they were just after the election. Even so, narrow 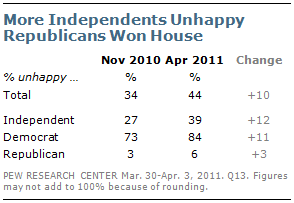 Independents are now divided in their reaction to the election: 43% say they are happy the GOP won control of the House while 39% are unhappy. In November, independents by a wide margin (48% to 27%) expressed a positive reaction to the Republicans’ victory. The proportion of Democrats unhappy that the GOP won also has increased (from 73% to 84%). Republicans remain overwhelmingly happy that the GOP won control of the House (90% happy, 6% unhappy). 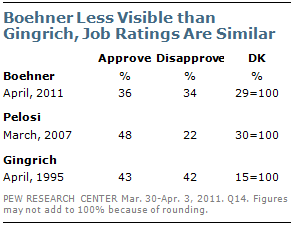 The public is split over the performance of Speaker of the House John Boehner, with many unable to offer a rating of the Republican leader. Boehner is no less visible than Nancy Pelosi was in the spring in 2007, but while Pelosi enjoyed a broadly positive balance of opinion, about as many say they approve of Boehner’s job performance (36%) as disapprove (34%); 29% cannot offer a rating.

In April 1995, Newt Gingrich also received mixed reviews from the public for his performance as Speaker of the House. However, Gingrich was far better known than either Pelosi or Boehner – just 15% could not offer a rating of Gingrich in the spring of 1995.

Tea Party Seen as Separate from the GOP 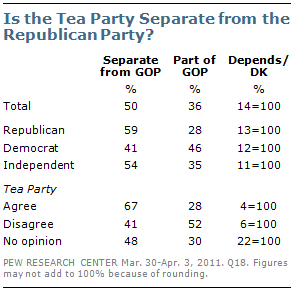 More continue to say that the Tea Party is a separate and independent movement from the Republican Party (50%) than say it is part of the GOP (36%). Opinion on this question is little changed since last November following the midterm elections (47% separate, 38% part of GOP).

Most Republicans (59%) and independents (54%) view the Tea Party as an independent movement. Democrats, however, are divided: 41% say it is a separate movement, 46% say it is part of the Republican Party. 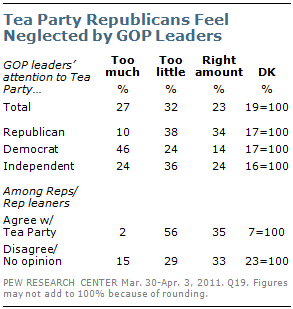