The Republican Party now leads the Democrats by 12 points as the party better able to reduce the federal budget deficit: 46% say the GOP could do better compared with 34% who prefer the Democrats. A year ago, the two parties were rated about evenly on reducing the deficit (38% Republicans, 35% Democrats).

On most other issues, the two parties run about even. But on several, the GOP has made substantial gains in recent years. In August 2009, the Democratic Party held a 13-point lead on making wise decisions about foreign policy (44% to 31%). Today, 40% say the GOP could do better while about as many (38%) choose the Democrats. The GOP also has drawn even with the Democrats on health care and energy. The Democrats led by 10 points on health care last September and by 10 points on dealing with energy problems last October.

While Republicans have the advantage in views of which party can reduce the budget deficit and have made inroads on other issues, the Democratic Party still holds substantial leads on several key traits and characteristics.

Democrats continue to have better ratings than Republicans on traits such as concern for average people (by 54% to 32%) and governing in a more honest and ethical way (42% to 33). And far more view the Democratic Party than the Republican Party as more willing to with political leaders from the other party (49% to 32%).

The parties are now about even on the question of who can bring about changes the country needs (44% say Democrats, 41% say Republicans). In June, 2010 Democrats held a 12-point edge on this trait. 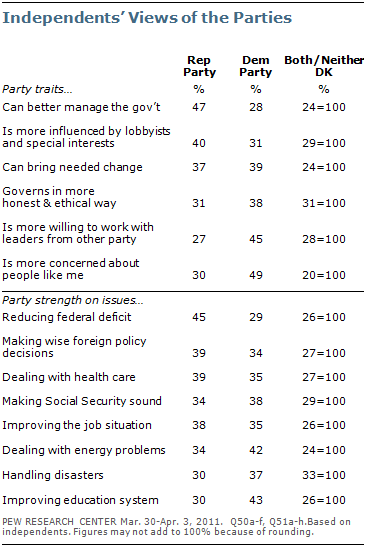 For the most part, independents’ views of the parties and their images mirror those of the general public. However, there is a notable exception to this pattern. Far more independents think the Republicans rather than the Democrats can better manage the federal government (by 47% to 28%).

Next: Section 4: Congress at 100 Days
← Prev Page
Page1Page2Page3You are reading page4Page5Page6
Next Page →