With the public growing more anxious about the economy and concerned about overseas commitments, Barack Obama’s job rating has edged lower. 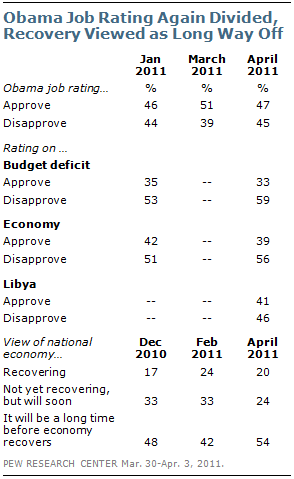 About as many now approve (47%) as disapprove (45%) of the way Obama is handling his job as president. In March, opinions about Obama’s job performance were more positive; 51% approved of his job performance and 39% disapproved. The current measure is similar to Obama’s ratings from last fall through early 2011.

Despite recent signs of job growth, Americans are taking a more negative view of the national economy. The proportion rating economic conditions as “poor” has risen from 42% in February to 53% currently. Equally important, the public’s economic outlook has dimmed: 54% now say it will be a long time before the economy recovers, up 12 points from February. And there has been a rise in the percentage that expects their personal finances to get worse over the next year – from 26% in December to 33% currently.

The latest national survey by the Pew Research Center for the People & the Press, conducted March 30-April 3 among 1,507 adults, finds widespread concern about an array of financial problems – not just jobs, but also prices for gas and food. 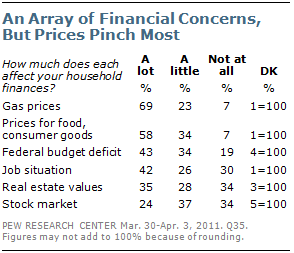 With the showdown on federal spending looming, Obama’s job rating continues to be much higher than those of Republican or Democratic leaders in Congress. Just 30% 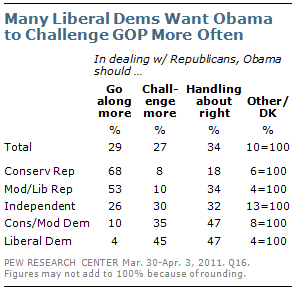 approve of the job that Republican leaders in Congress are doing while twice as many (61%) disapprove. The job rating for Democratic congressional leaders is equally dismal (31% approve, 60% disapprove).

The Republican Party has an advantage in views of which party can better handle the budget deficit – 46% say the Republicans can do better, compared with 34% who choose the Democrats. The two parties continue to run about even on most other issues, including jobs and health care. However, the Democratic Party holds leads over the Republicans on such traits as concern for average people (by 22 points), willingness to work with opposition leaders (17 points) and ethical governance (nine points). 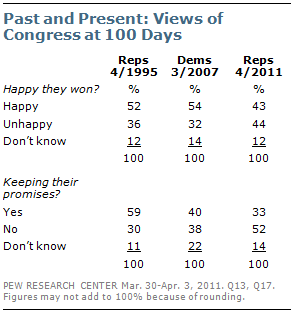 The new survey finds that as the Republican-led House approaches the 100-day mark of its tenure, about as many Americans say they are unhappy (44%) as happy (43%) that the GOP won control of the House last November. Just a third (33%) say they are keeping their campaign promises while 52% say they are not.

Comparatively, the Republican-led House gets less positive marks than did the Democratic-led Congress in March 2007 and the GOP-led Congress in April 1995. In both of those cases, however, the parties took control of both the House and Senate; the GOP currently has a majority in the House but not the Senate.

Next: Section 1: Views of Obama
← Prev Page
You are reading page1Page2Page3Page4Page5Page6
Next Page →