Currently, 47% approve of the way Obama is handling his job as president while 45% disapprove. Opinions about Obama’s job performance continue to be deeply divided along partisan 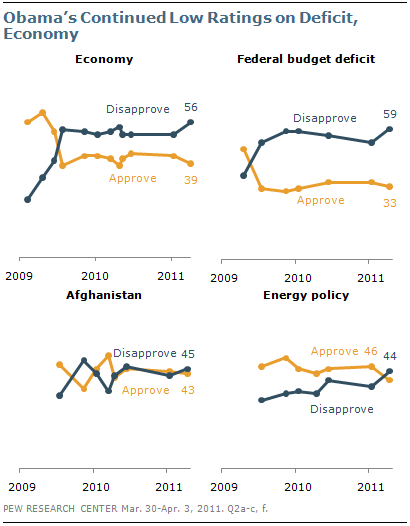 In terms of specific issues, Obama receives his highest rating for his handling of the environment (51% approve, 35% disapprove). On five other issues tested – Afghanistan, Libya, energy policy, the economy and budget deficit – Obama’s ratings are mixed or more negative than positive.

Obama Faulted on the Deficit 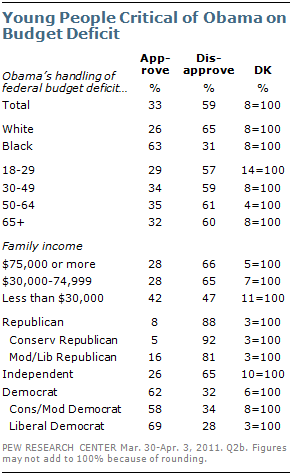 Even some groups that have generally positive opinions about Obama, such as young people, are critical of his handling of the federal budget deficit. Overall, more than half of those younger than 30 (54%) approve of Obama’s overall job performance – the highest percentage in any age group.

But nearly twice as many young people disapprove as approve of his handling of the federal budget deficit (57% to 29%). On this issue, the views of young people are similar to those in older age groups.

Nearly two-thirds of independents (65%) disapprove of Obama’s handling of the deficit, while just 26% approve. Even independents who lean to the Democratic Party give Obama only a mixed rating on this issue (48% approve, 43% disapprove).

How Should Obama Deal with Congress?

The public is divided over how President Obama should deal with Republicans in Congress. About as many say Obama should go along 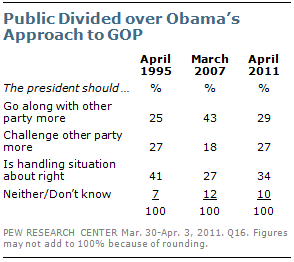 While mixed, opinion is far more favorable toward Obama than it was toward George W. Bush following the 2006 midterms. In March 2007, just 18% said Bush should challenge congressional Democrats more often – far more (43%) said he should go along with Democrats more often; about a quarter (27%) said he was handling things about right. The public’s views of Obama’s approach to Congress today is similar to opinions about Bill Clinton’s in the spring of 1995, following Democratic losses in the 1994 midterm election.