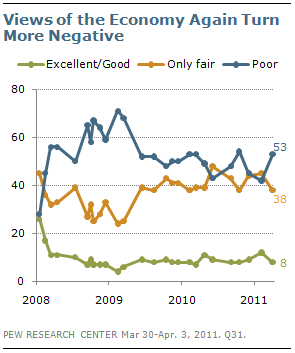 The public’s views of the national economy began to move in a less negative direction late last year. The proportion rating the national economy as poor fell from 54% in October to 45% in December. That trend continued through February, when 42% said economic conditions were poor.

But in the new survey, the number saying economic conditions are poor has again climbed; currently, 53% say the economy is poor, up 11 points from February. Fewer people rate the economy as only fair (38% now, down from 45% in February). As has been the case for the past three years, very few (8%) say that economic conditions are excellent or good. 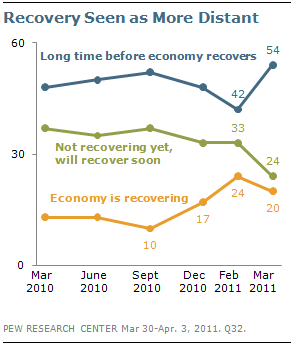 shown less change and are more positive than those of Republicans or independents (41% poor now, 36% in February).

Since February, there also has been a decline in the number saying the economic recovery is already occurring or will kick in soon. Two months ago, a majority (57%) said the economy was recovering (24%) or that the economy would recover soon (33%). 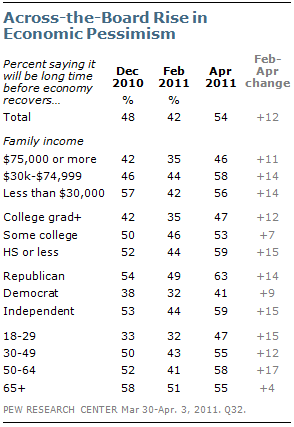 Only about four-in-ten (42%) said it would be a long time before the economy recovered.

The rise in economic pessimism since February has come across nearly all political and demographic groups. And in most cases, people are about as likely to see recovery as a long way off as they did in December.

At the same time, people’s financial outlooks for the next year have become somewhat more negative since December. Just over half (51%) say they expect their financial situation to improve a lot (7%) or some (44%) over the next year. However, the percentage saying they expect it to get a little or a lot worse has grown from 26% in December to 33% in the current survey. 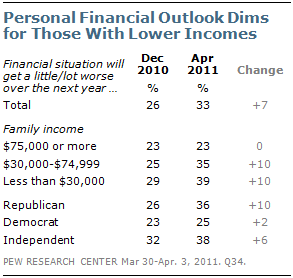 By contrast, those earning $75,000 or more a year have experienced no change in expectations and remain far less likely to say they expect their situation to worsen (23% compared with 35% and 39%, respectively).

Republicans have also become more pessimistic about the outlook for their family’s finances over the next year. Roughly a third (36%) expects their situation to get worse over the next year up from 26% in December. There have been no significant changes among Democrats or independents. 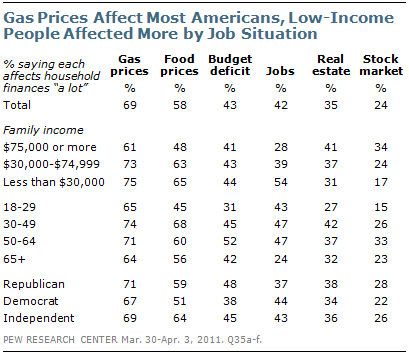 Next: Section 3: Views of the Political Parties
← Prev Page
Page1Page2You are reading page3Page4Page5Page6
Next Page →