With the public giving subpar approval ratings to President Obama and continuing to express negative views of Congress and the political parties, it goes its own way on many of the remaining issues before the lame-duck Congress.

Only about one-in-five Democrats (18%) favor keeping all of the tax cuts, compared with 33% of independents and 53% of Republicans.

On another major pending issue before Congress, most Americans who have heard at least a little about the START treaty favor its ratification by the Senate: 54% favor ratification of the arms control treaty while 24% are opposed. Democrats and independents favor the treaty’s ratification by wide margins, while Republicans are evenly split.

And by greater than two-to-one (59% to 23%), the public favors allowing gays and lesbians to serve openly in the military. These views are little changed from last month, before the Pentagon released its major study on the impact of repealing the “don’t ask, don’t tell” policy. Those who are aware of the Pentagon’s report have about the same opinions as those who heard little about it. (See “Most Continue to Favor Gays Serving Openly in the Military,” Nov. 29.).

The latest national survey by the Pew Research Center for the People & the Press, conducted Dec. 1-5 amon 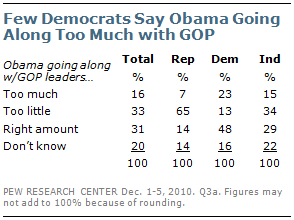 g 1,500 adults, finds that 45% approve of Obama’s job performance while about as many (43%) disapprove. Obama’s job ratings have changed little since September.

However, Obama gets mixed ratings from Democrats and Democratic leaners for how well he stands up for his party’s traditional positions on such issues as protectin 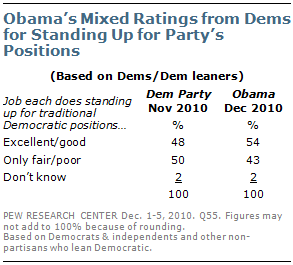 g the interests of minorities, helping the poor and needy and representing working people. Only about half of Democrats and Democratic leaners (54%) say Obama is doing an excellent or good job of advocating the party’s traditional positions, while 43% say he is doing only fair or poor. White Democrats and Democratic leaners are divided over Obama’s performance in standing up for the party’s traditional positions in these areas (51% excellent/good vs. 47% only fair/poor). By contrast, black Democrats and leaners offer much more positive assessments (70% vs. 29%).

Overall, Democrats and Democratic leaners give Obama only slightly better marks than the party itself for advocating traditional positions. In November, 48% said the party was doing an excellent or good job while 50% said it was doing only fair or poor. 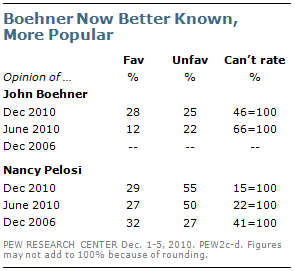 The balance of opinion is more positive toward John Boehner, who is expected to succeed Pelosi as House speaker next month. About as many say they have a favorable opinion of Boehner (28%) as an unfavorable view (25%). Boehner’s favorability ratings have increased in recent months, along with his visibility. In June, nearly twice as many expressed negative as positive views of Boehner (22% vs. 12%). Notably, Boehner’s current favorability ratings are about the same as Pelosi’s in December 2006, shortly before she became speaker (32% favorable/27% unfavorable). 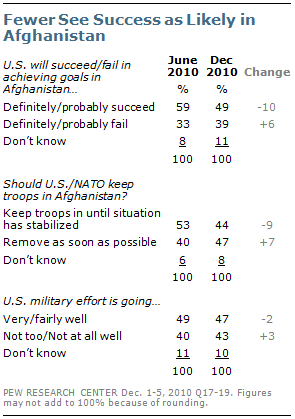 The recent tensions on the Korean peninsula have drawn a tempered reaction from the public. Half (50%) of those who have heard about the recent North Korean artillery attack on a South Korean island say it is similar to other incidents that have happened from time to time in the past; fewer (41%) say the attack represents a major increase in hostilities.

Next: Section 1: Issues Before the Lame-Duck Congress
← Prev Page
You are reading page1Page2Page3Page4Page5
Next Page →

Mixed Views on Tax Cuts, Support for START and Allowing Gays to Serve Openly
Overview
Section 1: Issues Before the Lame-Duck Congress Section 2: Views of the Parties, Congress & Obama Section 3: Afghanistan and the Korean Crisis About the Surveys