Over the past six months, the public’s assessments of the U.S. military effort in Afghanistan have changed very little. Currently, 47% of Americans say the military effort there is going very (8%) or fairly well (39%). These perceptions were similar in both June (48% very/fairly well) and July (49%). 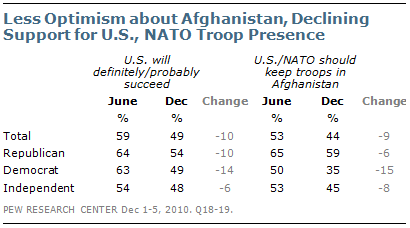 This is the most pessimistic the public has been on this question since it was first asked in January of 2009. Six months ago, a clear majority (59%) said the U.S. would achieve its goals, while 34% said it would fail.

There are no significant partisan differences in predictions for the success of the U.S. goals in Afghanistan, with about half of Democrats (49%), Republicans (54%) and independents (48%) now saying the U.S. will definitely or probably be successful.

Korean Attack – More of the Same? 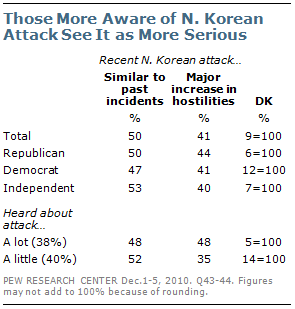 Among those aware of the attack, 50% say it is similar to other incidents that have occurred in the past, while fewer (41%) say this represents a major increase in hostilities.

There are no significant partisan differences in opinions about the seriousness of this incident – roughly half of Republicans (50%), Democrats (47%) and independents (53%) say the attack is similar to other incidents that have occurred from time to time in the past.

Mixed Views on Tax Cuts, Support for START and Allowing Gays to Serve Openly Section 1: Issues Before the Lame-Duck Congress Section 2: Views of the Parties, Congress & Obama
Section 3: Afghanistan and the Korean Crisis
Korean Attack – More of the Same?
About the Surveys