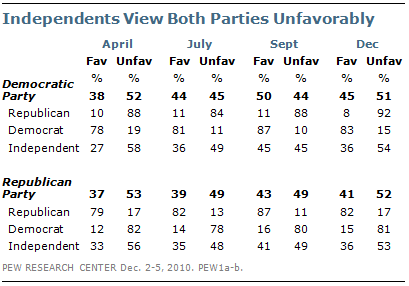 Even among Republicans, views of the GOP are little changed from September. And more independents continue to view the Republican Party unfavorably rather than favorably (53% vs. 36%).

Opinion about the Democratic Party has changed little since September among Democrats themselves (currently 83% favorable) and Republicans (8%). But opinion among independents has shifted – 54% now have an unfavorable opinion of the Democratic Party, up from 45% in September.

Opinion about Congress and Its Leaders

Opinion about Democratic congressional leaders is, on balance, more negative than positive. Only 29% have a favorable opinion of Nancy Pelosi while 55% have an unfavorable opinion. These views are little changed from June (27% favorable, 50% unfavorable). 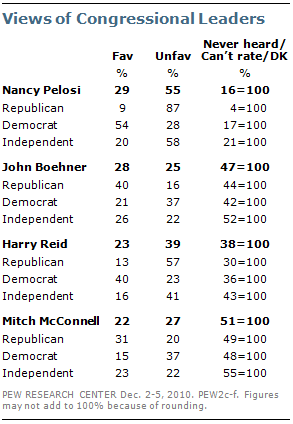 Opinion about Republican congressional leaders is divided. About three-in-ten (28%) have a favorable opinion of John Boehner, while 25% have an unfavorable opinion; nearly half (47%) have never heard of him or cannot rate him. Views of Boehner have improved since June when only 12% viewed him favorably, 22% unfavorably and 66% had never heard of him or could not provide a rating.

Similarly, about as many view Mitch McConnell favorably (22%) as unfavorably (27%). As is the case with Boehner, roughly half (51%) have never heard of McConnell or cannot rate him.

Overall, Hillary Clinton is viewed much more favorably than the Democratic leaders in Congress. About six-in-ten Americans (59%) view her favorably while 34% view her unfavorably. A majority of Democrats (84%) and independents (56%) have a favorable opinion of the Secretary of State, compared with 30% of Republicans.

Favorability of the President and First Lady 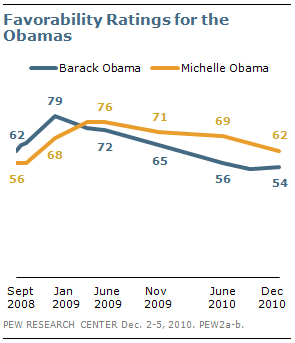 There has been little change in Barack Obama’s favorability rating from earlier this year. Currently, 54% have a favorable opinion of the president while 43% have an unfavorable opinion. Views of Obama grew more negative from January 2009 to June of this year, but have been steady since then. 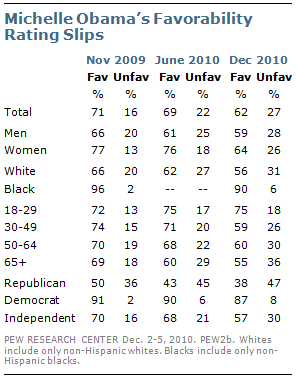 As has been the case over the past year, Michelle Obama’s favorable ratings are higher than her husband’s. However, her ratings have slipped since the summer. In the current survey, 62% view the first lady favorably, down from 69% in June.

Opinion about Michelle Obama has grown more negative among independents: 57% now have a favorable opinion of her, down from 68% in June.

Michelle Obama’s favorability ratings also have declined among women. Currently, 64% of women have a favorable opinion of her, down 12 points from June. And while a majority of non-Hispanic whites (56%) view Michelle Obama favorably, that is down from 66% in November 2009.

As has been the case for much of 2010, the public is closely divided on Obama’s overall performance as president. Currently 45% approve, while 43% disapprove. His approval rating has ranged between 44% and 49% since last December.

Obama continues to get generally good marks from his own party, with 77% of Democrats currently saying they approve of the job he is doing; just 14% disapprove. Independents are divided, with 42% approving and 43% disapproving. Republicans remain very negative about the president; just 11% approve and 81% disapprove.

The president’s ratings among key segments of his 2008 electoral coalition remain mostly unchanged from earlier in the year. The vast majority of African Americans (87%) say they approve of the job he is doing (just 7% disapprove), while half (50%) of young people ages 18 to 29 approve (32% disapprove).
At 45%, Obama’s approval rating is slightly higher than two of his predecessors’ ratings at a comparable point in their presidencies – that is, a month a
fter their party suffered a serious defeat in the midterm elections. In December of 1994, 41% of Americans approved of Bill Clinton’s performance, while 47% disapproved. Similarly, in a December 1982 Gallup poll, 41% approved of Ronald Reagan’s performance, while 50% disapproved. 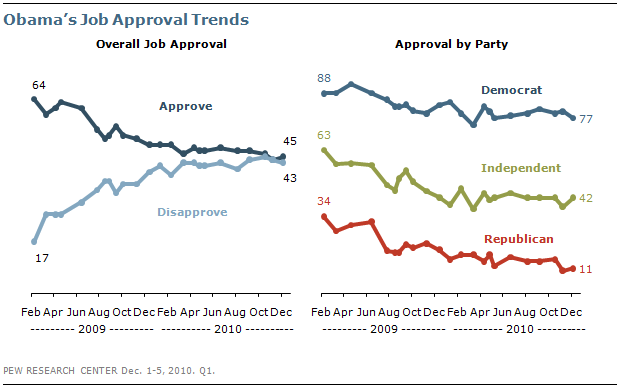 Obama and His Party 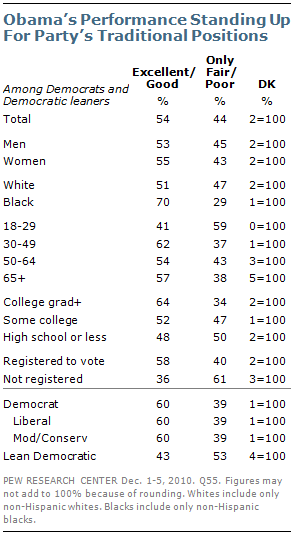 But a significant minority of Democrats and Democratic leaners give Obama relatively low marks for his overall performance in standing up for the party’s traditional positions on such things as protecting the interests of minorities, helping the poor and needy, and representing working people.

About half of Democrats and Democratic leaners (54%) say he has done an excellent (17%) or good (37%) job of standing up for the party’s traditional positions; 44% say he has done only fair or poor.

Those who affiliate with the Democratic Party give Obama higher ratings for standing up for the party’s traditional positions than do those who just lean Democratic (60% vs. 43%). Among those who identify as Democrats, there is no difference between liberals and moderate and conservative Democrats.

Obama gets especially low ratings on standing up for the party’s positions from young people, a key segment of his 2008 coalition. Among Democrats and Democratic leaners younger than 30, fully 59% rate his performance as only fair or poor, while just 41% say it has been excellent or good.

Next: Section 3: Afghanistan and the Korean Crisis
← Prev Page
Page1Page2You are reading page3Page4Page5
Next Page →

Mixed Views on Tax Cuts, Support for START and Allowing Gays to Serve Openly Section 1: Issues Before the Lame-Duck Congress
Section 2: Views of the Parties, Congress & Obama
Opinion about Congress and Its LeadersFavorability of the President and First LadyMixed Job Ratings for ObamaObama and His Party
Section 3: Afghanistan and the Korean Crisis About the Surveys