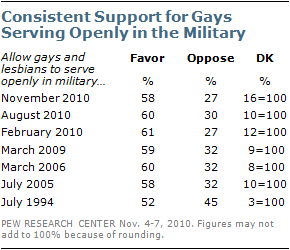 As the Pentagon prepares to release its highly anticipated survey of military personnel about the “Don’t Ask, Don’t Tell” policy, most Americans (58%) say they favor allowing homosexuals to serve openly in the armed forces. Fewer than half that number (27%) oppose allowing gays and lesbians to serve openly.

The national survey by the Pew Research Center for the People & the Press and the Pew Forum on Religion & Public Life, conducted Nov. 4-7 among 1,255 adults, finds continuing partisan and religious differences in opinions about whether to permit gays and lesbians to serve openly in the nation’s armed forces.

Nearly half (48%) of white evangelical Protestants oppose letting gays serve openly in the military, while just 34% support this proposal. Majorities or pluralities across other religious groups favor allowing gays to serve openly.

The balance of opinion across age groups is in favor of letting gays serve openly. Those 65 and older are the only age group in which fewer than half (44%) favors this; still just 28% of seniors are opposed to gays and lesbians serving openly while an identical percentage offers no opinion.

Two-thirds of college graduates (67%) favor gays and lesbians serving openly, as do more than half of those with some college experience (55%) and those with no more than a high school education (54%).

The differences in opinions across political and demographic groups also were evident in 1994. Since then, the balance of opinion among most groups has become more favorable. (For more on changes in opinion about gays in the military, see Support for Same-Sex Marriage Edges Upward, Oct. 6, 2010.)

Among all Republicans and Republican leaners, those who agree with the Tea Party are less supportive of allowing gays to 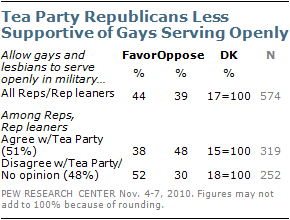 serve openly than are those who disagree with the Tea Party or have no opinion of the movement.